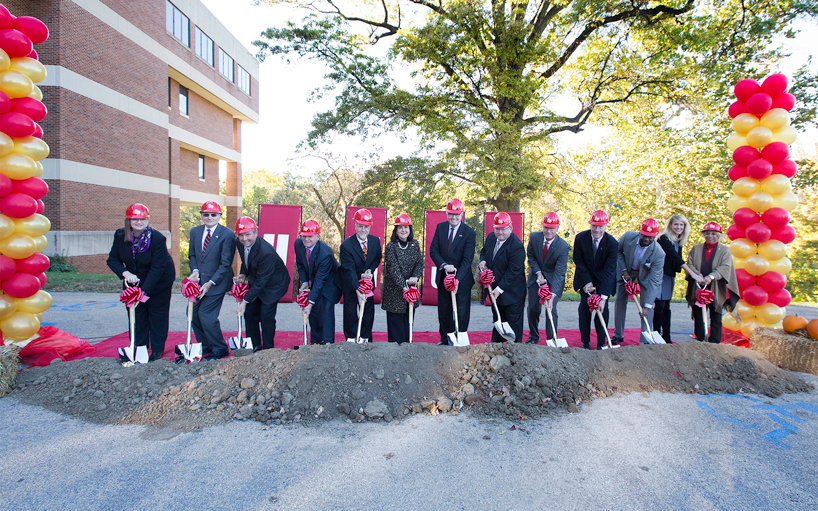 With a Clydesdale in the background and Anheuser-Busch beer chilling around the corner, more than 150 people gathered on Oct. 29 for the much-anticipated groundbreaking of the new Anheuser-Busch Hall for the University of Missouri–St. Louis.

“The main reason we are gathering today is to thank our donors. Thanks to their generosity, we are able to break ground on the first-ever building on campus dedicated to business education,” said Charles Hoffman, dean of the College of Business Administration. “While the building is not as important as what will go on within it, the state-of-the-art classrooms, student collaboration areas and business community linkages will greatly help in our job of preparing tomorrow’s St. Louis business leaders.

“New curricula in cybersecurity, entrepreneurship, social media marketing and supply chain will add to and strengthen the solid programs the college has developed since our first graduating class in 1967. This building, along with other new facilities like the brand new Recreation and Wellness Center, will be a powerful marketing tool to attract more students to prepare for and thrive in a business career.”

The building became closer to reality in May when Gov. Jay Nixon announced the release of $10 million in state-matching funds for its construction. The funds will be used as a 50/50 match along with $10 million in private and corporate funds raised by UMSL to construct a new 50,000-square-foot building. 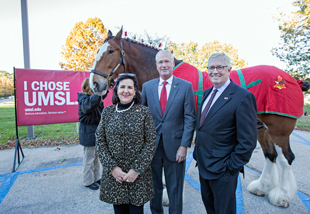 Posing, from left, are Curly the Clydesdale, Margarita Flores, vice president for community affairs at Anheuser-Busch; Rick Stream, alumnus and former state representative; and Dean Charlie Hoffman, who attended the groundbreaking for the new business building. (Photo by August Jennewein)

“This is a great day for UMSL and for the entire St. Louis region,” Nixon said in a statement. “Anheuser-Busch Hall is an investment that will pay huge dividends for students, families and businesses in the region for generations to come, and I’m pleased we could help make it a reality with $10 million in state funding. On behalf of six million Missourians, I applaud UMSL and its many outstanding corporate partners for their work to enhance opportunities for students and build a brighter future for the region.”

Anheuser-Busch Hall, named in honor of a lead $2.5-million gift from Anheuser-Busch Foundation, will streamline all the current business school operations, offering students and faculty a centralized place to collaborate, interact and share ideas within their specific disciplines. It will feature cutting-edge classrooms, modern computer laboratories, faculty offices, seminar and conference rooms, and undergraduate and graduate advising areas. Currently, students and faculty are scattered across five buildings on the UMSL campus.

“This effort has been many years in the making, and it truly could not have been made possible without all the other donors, who like Anheuser-Busch, believe in supporting the educational needs of our students, many of which are from the region or remain in the region for their professional careers,” said Margarita Flores, vice president of community affairs for Anheuser-Busch. “We look forward to the completion of the building and know that this will be a great place to foster learning, collaboration and to generate the next leaders of our community.”

The building will be constructed northeast of Express Scripts Hall along West Drive.

“UMSL has one of the absolute best colleges of business administration in the region, in the Midwest, in the country by really any measure,” said UMSL Chancellor Tom George. “We regularly receive accolades from U.S. News and World Report, Forbes Magazine and the Princeton Review. And the college has produced nearly 29,000 alumni. This groundbreaking culminates an effort to take our 2,700 students, faculty and staff and start to coalesce them into a central location.”

UMSL’s College of Business Administration was established in 1967. The college regularly receives accolades from U.S. News & World Report and other publications. The college is the only such program in St. Louis with accreditation by the Association to Advance Collegiate Schools of Business in both business and accounting.

Twenty-eight companies and individuals gave $100,000 or more to help make this building a reality. Those donors include: