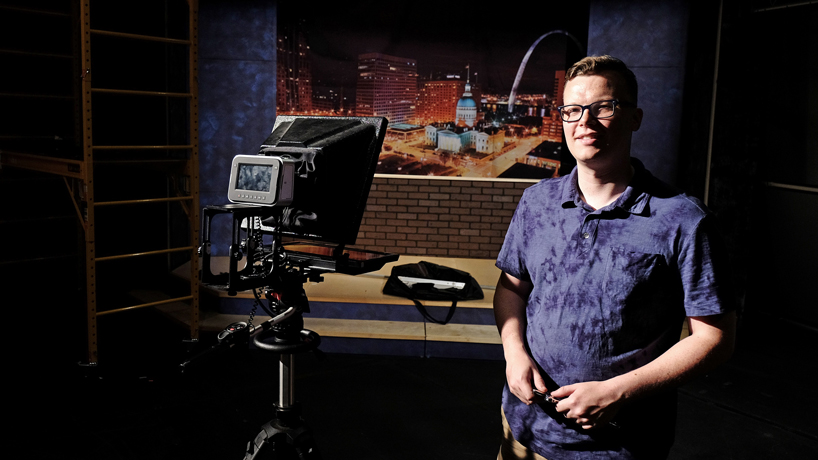 STL Up Late executive producer Josh McNew, BA 2013, continues to draw on the knowledge and networks he developed as a student in UMSL’s media studies program. (Photos by August Jennewein)

In a sketch kicking off the final episode of the show’s first season, two STL Up Late comics are poking fun at a familiar online trend. With over-the-top enthusiasm, they introduce the STL Up Late audience to Faux-to Finish, which photoshops its customers into images of such races to provide “the benefits of running a marathon with none of the effort.”

“Every customer will walk away with an obnoxious [26.2] sticker, a pre-cut T-shirt covered in logos and a guarantee that your ex will see at least three of your posts in their social media,” one of them deadpans. “Life’s for sharing, folks, not experiencing! Now stay on that couch and watch this late-night talk show probably on YouTube.”

Somewhere behind the scenes is University of Missouri–St. Louis alumnus Josh McNew. The executive producer and co-creator of STL Up Late, McNew started the project in 2013 alongside Christensen shortly after graduating from UMSL. The two had begun partnering on funny video shorts on the side while working for Vat19, a local company whose branded YouTube videos frequently reach millions of viewers, and they were trying to think of ways to build a bigger audience for their own projects. That’s when Christensen suggested the idea of starting a late-night talk show.

“It wasn’t a TV show at that point – just a live theater show,” McNew explains. “We thought, ‘We can interview someone, have a band there, and we can premiere our video shorts and put them online after the shows.’ It went on for about two years like that, and then eventually we started taping not just the musical performances but the interviews. And then we thought, ‘Well, why don’t we try and make this a TV show?’”

That meant spending significant funds on a pilot episode and convincing a TV network to sign on – no easy task, and not one with an assured positive outcome either, but they took the leap. 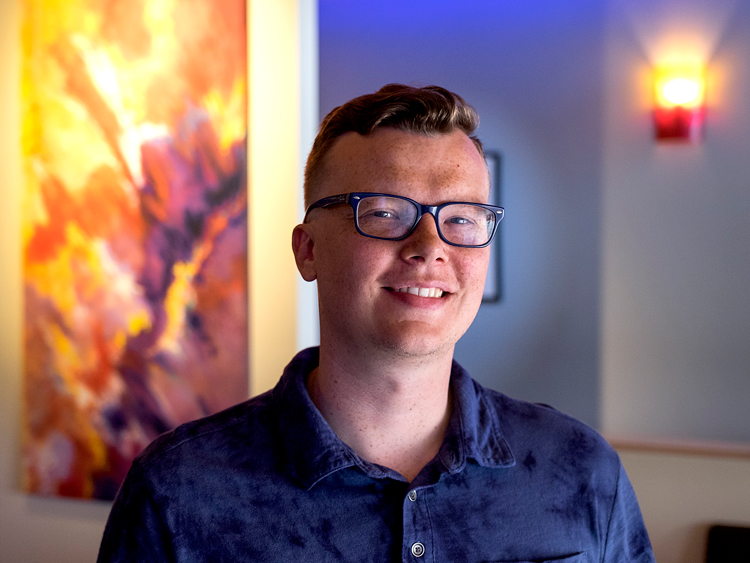 Since successfully shopping around a pilot episode and conducting a $38,000 Kickstarter campaign alongside co-creator and host Eric Christensen last fall, UMSL alumnus Josh McNew has been busy overseeing STL Up Late’s crew of contributors as well as its digital presence and local partnerships. He’s pictured here in the lobby of the Marcelle Theater in Grand Center, where the live, late-night talk show is filmed.

“We maxed out a credit card, and we rented cameras, we rented out a space, and we threw a pilot together,” McNew recalls. “But we had to do that in order to shop it around to the local networks. And then we finally got KMOV (Channel 4) to say, ‘All right, we’ll give you guys a shot.’ And then we raised $38,000 through Kickstarter that October, so we were able to pay that credit card off and our investment worked out.”

Since that pivotal time last fall, STL Up Late has continued onward, with 18 full episodes now put to bed and ticket sales steady. Along with producing the show itself, another critical piece of McNew’s role has been fostering local partnerships and sponsorships, such as with Schlafly and the Riverfront Times.

In a lot of ways, McNew says, he feels lucky – it’s the kind of work he always dreamed of doing. He adds that it wouldn’t have been possible apart from his experience as a UMSL media studies student.

“I’m the first person in my family to go to college, and my professors at UMSL were very helpful and really gave me the guidance I needed to help me decide what I wanted to do and then figure out how to make that happen,” he says.

McNew made the most of the resources available in his department, taking the initiative to secure close to $10,000 in grants to create a short film during his time on campus. In the end the project, titled “The Stakes,” was selected for both the St. Louis Filmmakers Showcase and the St. Louis International Film Festival.

“I wanted to make something we’d be really proud of,” he says. “And it really gave me a sense of what the process is like. With a lot of student films it’s basically you taking the camera available and making it yourself. But in real life the situation is that you’ve got a budget, and you’ve got to put together a package – you’ve got to put together what’s right for what the client wants. So managing a budget and making sure to put the money in the right places to get the outcome that you needed – that was really the filmmaker experience that I needed.”

The network of mentors, contacts and friends continues to be key, too. Several of the cast and crew members featured on the website are UMSL alumni – most of them peers of McNew. Lauren Tegtmeyer is just one example.

“We needed a floor manager/stage director, and I remembered taking a stage managing class here and that there was this girl who was really great at it and would help me,” McNew says. “And so as soon as we started this I thought, ‘I’m going to reach out to Lauren.’ But I just could not find her information. But then RFT reviewed the first show, and she happened to read the article and reached out to ask me if she could come and help with the show.”

STL Up Late also offers internships, and college students from UMSL have been among those to work with McNew behind the scenes.

“It’s a cool internship because – well, we don’t pay – but a lot of my internships when I was younger were getting coffee and cleaning and stuff like that,” he says. “And I don’t ask anybody to get me coffee. They get hands-on experience. They get to run a camera, I train them, and they get to actually do it.”

Born in southern Missouri, McNew has lived in the St. Louis region since age 14. His love for the city is obvious – and has a lot to do with why STL Up Late even exists.

“This is another place where we’re kind of using comedy to build an audience and then introduce that audience to cool things in St. Louis,” he says. “St. Louis has kind of a huge self-esteem problem. And I don’t know why, because there are so many great things to do in this city. There are a lot of people doing great things – great podcasts, rockstar chefs, programs that are helping people get out there and live their dream.”

When he’s not busy guiding STL Up Late in various capacities, McNew is also at work growing his young production company, Up Late Productions, which has several projects underway.

“STL Up Late is our biggest project, but we also provide production services,” he says. In fact, he recently returned from five days in Honduras, where he was shooting a documentary.

“That was really cool. We traveled by helicopter while we were there, from city to city and village to village.”