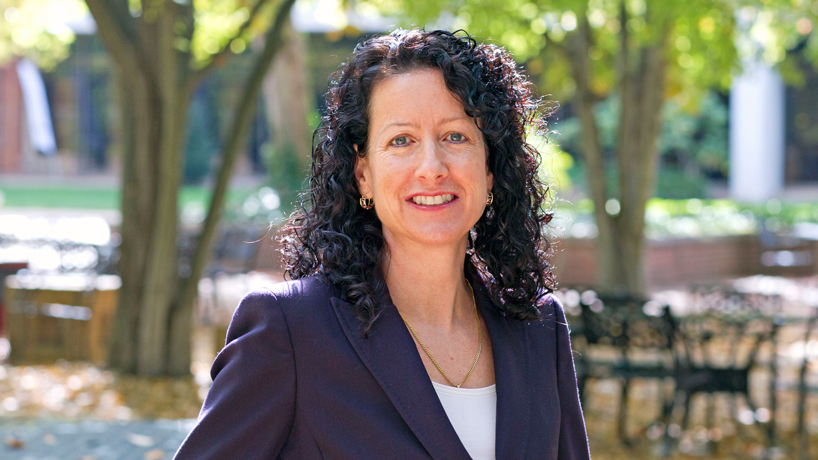 Mary Lacity, Curators’ Distinguished Professor of Information Systems at UMSL, researches how robots and humans intersect in the workforce. (Photo by August Jennewein)

The exploration of how technology can spell promise or peril for mankind is a common trope in science fiction narratives such as “Star Trek,” “Blade Runner” and “The Matrix.” 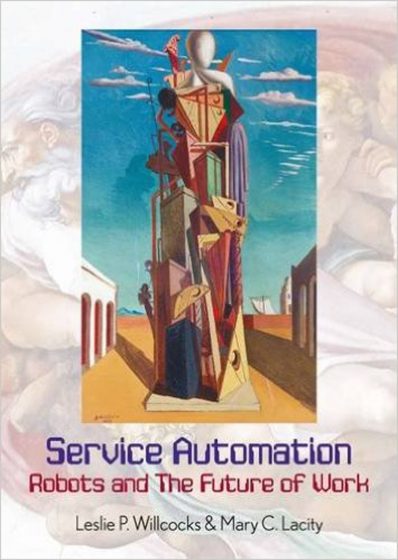 Co-authored with Leslie P. Willcocks, Mary Lacity’s latest book makes arguments for the efficacy of utilizing robots in industry and quells notions of a future where employment is scarce for humans. (Image courtesy of Mary Lacity)

Yet automation in current day industry is no science fiction — it has quickly become science fact, and concerns of employees being replaced by machines that can build cars, calculate insurance claims and win game shows have become all too real.

Despite worry over a jobless future, where the majority of the population would remain unemployed, Mary Lacity, Curators’ Distinguished Professor of Information Systems at the University of Missouri–St. Louis, is convinced that these fears may be overblown and inaccurate.

In her latest book, “Service Automation: Robots and the Future of Work,” she and co-author Leslie P. Willcocks from the London School of Economics analyze how new technology has changed, energized and grown within companies. In her estimation, automation is more boon than burden to society, allowing experienced professionals opportunities to develop new skill sets and advance their field.

“The predictions of jobs lost to automation rarely consider all the new jobs that will be created,” Lacity said. “Few knowledge-based occupations will go away, but rather the nature of those jobs will evolve. Accountants, auditors, doctors, professors, lawyers and other knowledge-based occupations will still exist – it’s just the composition of the tasks within those jobs that will be altered because of automation.”

Although AI programs such as IBM’s “Jeopardy!” winning Watson can process millions of pages of data in sub-second time, Lacity contends that machines – even incredibly fast ones – still just manipulate symbols.

According to Mary Lacity’s research, humans prove creative, original and empathetic – and can outperform even the most sophisticated computers in novel situations. (Image courtesy of Mary Lacity)

Always interested in math, Lacity pursued an undergraduate degree in quantitative business analysis at Penn State University during the early ’80s. Upon graduation, she took a job at Exxon where she was then trained in the emergent field of management information systems. The opportunity to work with cutting-edge technology offered her a revelation that would shape her career for decades to come.

“I soon realized that technologies offer no magic solutions — getting value from technology requires a massive amount of human agency and management,” Lacity said. “I became interested in studying how companies can successfully deploy technology, so I matriculated into a PhD program in MIS at the University of Houston to find answers.”

And now, as she nears 25 years as a professor at UMSL, Lacity’s research has yielded numerous publications, including a recent contribution to the MIT Sloan Management Review in which she and her co-author describe how human-robot teams are changing service industries for the better.

Through her research, Lacity has found that a cyborg-ruled, dystopian future ripped from the pages of science fiction thrillers is not likely. So far, software robots have been useful in taking over dreary, repetitive and highly structured tasks, liberating humans to perform other tasks requiring creativity, problem-solving and emotional intelligence – an outcome that, thankfully, mirrors the utopian possibilities of human advancement as seen in Star Trek.

“Across the Star Trek series, the Federation chose to use automation to liberate humanity from poverty and starvation so that humanity could focus on exploration and self-actualization,” Lacity said. “The Star Trek series underscores the idea of human agency and the importance of choice, which is important to consider as we seek to advance the use of new technology in thoughtful ways – otherwise we might all end up as Borgs.”