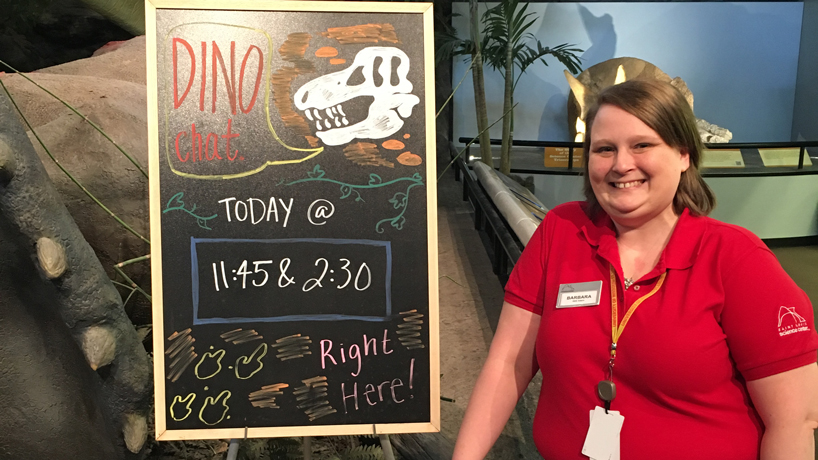 Barbara O’Dell brings a wealth of positive memories from her own childhood experiences to her internship interactions with children at the Saint Louis Science Center. (Photo courtesy of Sara Rambo)

“The best thing to see are the kids that grew up coming here,” says University of Missouri–St. Louis College of Education student, Barbara O’Dell. “Now they bring their own kids. I even have a picture of my daughter’s first visit here. Now she is 8 years old and her birthday wish was to come here for the day. She told me she just loves it here. I do too.”

O’Dell is interning at her dream site, the Saint Louis Science Center. She works Monday through Saturday, completing a minimum of 480 hours for the Bachelor of Educational Studies Capstone Internship.

“I started here in September to complete 120 hours. Then Brian Thomas, the senior educator in ecology and dinosaurs, offered me a second semester,” she says. “I think he offers that to everyone, though. I think he wants people to stay longer. He’s looking for outgoing people, folks that engage the public easily.

“Every day I ask him what he wants me to do for the day. He tells me, ‘I want you out on the floor.’ Then he doesn’t see me for hours and asks me where I was. I tell him I was exactly where he wanted me – playing with kids in the sand table.”

With O’Dell bringing a lifelong passion for science, a minor in biology and a background in early childhood care to her work at the Science Center, the internship weaves together all of her strengths to create what she calls a life-changing experience.

“I grew up thinking I was going to be a biology teacher,” O’Dell says. “But then I learned about the BES degree when I was transferring to UMSL from St. Louis Community College–Meramec. I was meeting with my adviser, and she told me about the degree and how it would be a good fit for me. She told me about the Parks and Museums emphasis and gave me a list of the internship sites. I saw the Science Center and knew I had found the right place for me.”

O’Dell’s duties at the Science Center include working the floor of the ecology and dinosaur dig area, interacting with visitors and giving tabletop demonstrations.

This semester, she was given the assignment of creating a field trip demonstration curriculum. She developed it with help from Andrew McDonald, the paleontologist in residence who runs the educational programs that aim to connect the public to real scientists. For the activity, O’Dell and the paleo lab team created a geological time period chart to resemble a clock.

“I flip it over to keep the visitors curious,” O’Dell explains. “I ask them when they think dinosaurs and humans came about. Then I flip it over again and show them that in the grand scheme of things, humans have only been around for 4 seconds.

“Every morning, we have a team huddle for the day ahead. There are different color schemes that our managers assign for the day. The colors are based on projected attendance, with purple being the busiest days with a lot of school groups attending. One of my projects right now is developing an activity for a field trip. It’s a demonstration with boiling water to show the effects of global warming and glaciers moving. We finished it two weeks ago. Our first time to do it was last week at a teacher preview. It was a lot of fun.”

The number-one question O’Dell gets is this: How do I get to the movie theater?

“Little kids will ask questions and some of them are so cute,” O’Dell says. “They often ask, ‘Why is the dinosaur dying?’ Because the giant, animated T-Rex is standing over his slashed-up prey, the triceratops. Also, a lot of people ask me if I have seen ‘Jurassic Park.’ I have. I love that ‘Jurassic Park’ has opened up paleontology and dinosaurs to the world, but a lot of what they showed was not scientifically factual. Velociraptors are actually smaller and have feathers. A lot of visitors don’t know that they had feathers.”

One lesson that O’Dell says will help prepare her for a career in informal education is to “listen to our little visitors.”

“I make sure I get down on their level and find out what they are interested in,” she adds. “It might not be the dinosaurs; it could be the planets. I try to figure out what gallery to send them to. When I was younger, I can remember visiting the Science Center and can remember educators who cared about their visitors. Kids will come down the steps with horror in their face when they look at the T-Rex as if to say, ‘That thing can eat me.’ When I see that, I try to calm them down.”

For her, finding an internship site that she is passionate about was key – along with an openness to learn.

“I try to learn everything I possibly can from the people around me,” O’Dell says. “Everyone here has not just taught me everything they know about the exhibits or dinosaurs but the world in general. I spend a lot of time with Dr. Andre, and he can tell you everything there is to ever know about a dinosaur. It’s awesome because everything I learn from him, I can turn it around and take it to our audience.”

This piece was written by UMSL graduate student Sara Rambo. It originally appeared on the COE Exchange.