A life well lived: Stories from the first graduating class in celebration of its 50th reunion 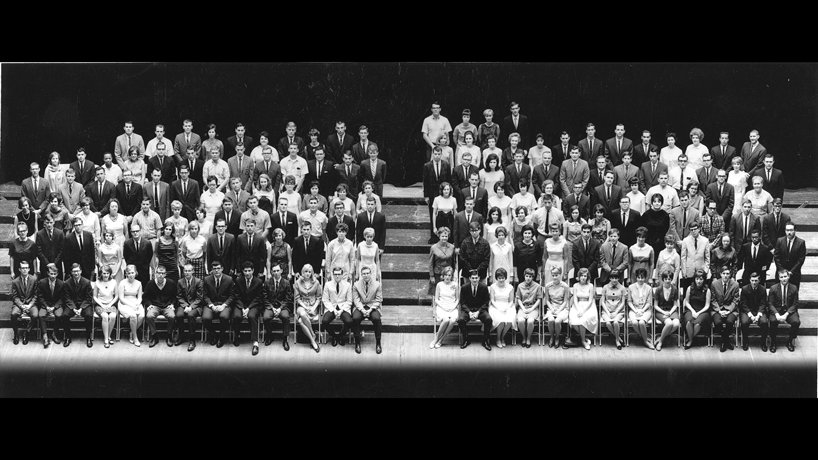 The class of 1967 poses during their graduation rehearsal. Not all graduates were present that day. Click on the photograph to zoom in on a larger version of the image. (Photos courtesy of University Archives)

By Bob Samples and Marisol Ramirez

A circuit judge, a social studies teacher, wife to a mayor, a scientist in an engineering lab and a man that sold Christmas trees.

Those who make up the University of Missouri–St. Louis’ first graduating class went on to many different adventures in life, but they all share one adventure in common – taking a chance on a fledgling university.

In the years following UMSL’s formation in 1963, campus consisted of a handful of eager faculty members and a former golf course clubhouse that served as its primary structure. The university was, for many, the affordable option that allowed them access to higher education – a need UMSL continues to serve today.

But times were different. It was the height of the Vietnam War, and many young men turned to academics in lieu of rifles. People preached peace and love, and the Civil Rights Movement spurred. 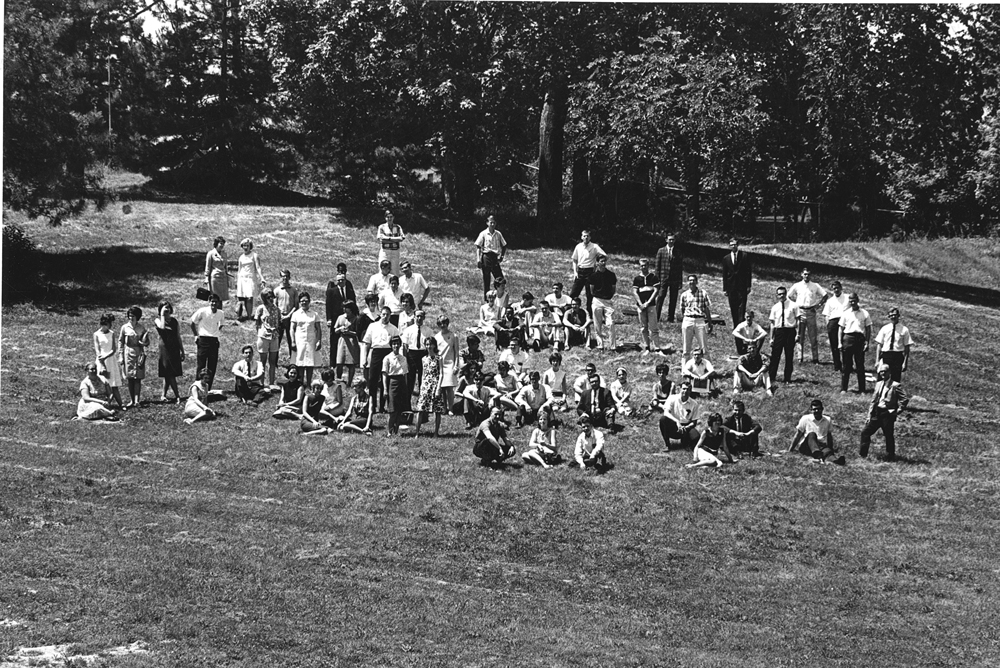 The class of 1967 takes a break from their graduation rehearsal on the hillside of Bugg Lake at UMSL. Click on the photograph to zoom in on a larger version of the image.

In the midst of that backdrop came UMSL’s first graduating class in 1967 with 205 graduates. Since then, the university has issued 108,000 degrees to 96,000 people – impressive numbers given its relative youth.

In this article, UMSL celebrates the first of those people who sought “different and better lives.” A few members of the class of 1967 reflect on their UMSL days and adventures since.

Linda Ashford (on the right, row 7, second person)
Fresh out of Normandy High School, Ashford was excited to “attend a school in my own neighborhood and be part of a new addition to the University of Missouri System.” She wasn’t disappointed.

“I received an excellent education,” Ashford says. “I enjoyed the professors as well as my classmates. The ’60s were a tumultuous time, and the discussions and debates helped prepare me for my career.”

Graduating with a bachelor’s degree in history, Ashford taught social studies in the Pattonville and Lee’s Summit school districts – with a hiatus in between to raise children. She’s since retired and lives in Lee’s Summit, Missouri.

Richard Bresnahan (not pictured)
The Mercy High School graduate was attracted to UMSL for its affordability and remembers fondly the “professors and fellow students who were wonderful and helped me a great deal.”

Following his graduation from UMSL with a bachelor’s degree in business administration, Bresnahan joined the U.S. Army, serving from 1968 to 1970. Afterwards, he earned his law degree from the University of Missouri–Columbia and practiced law in St. Louis for 32 years before his appointment as a circuit judge in St. Louis County.

He retired in 2015, has two children and lives in St. Louis.

Lois Brockmeier Schoemehl (on the right, row 1, ninth person)
Graduating with a bachelor’s degree in English, Schoemehl was the inaugural director of UMSL’s first office for alumni relations, which also came into existence in 1967. She oversaw its operations and growth for nearly a decade, before shifting to raising children, volunteerism and helping her husband’s political career.

Schoemehl’s husband, Vince, who earned a history degree from UMSL in 1972, was an alderman and three-term mayor for the city of St. Louis, where the couple still resides. They have two children and one grandchild.

Schoemehl chose UMSL for its proximity after graduating from Normandy High School. Her fondest memories of UMSL were student organizations and good teachers, especially William Hamlin who “awakened in me a lifelong love of reading,” Schoemehl says. Hamlin was instrumental over the years in building the Department of English.

Oliver Dunn (on the left, row 1, 10th person)
Choosing UMSL was an “obvious decision” for Dunn. Recently out of the U.S. Air Force, he was looking for a college that was local, inexpensive and offered his preferred degree – Spanish.

“I thoroughly enjoyed my Spanish classes with Professor Marion Holt, a great teacher,” Dunn says. “I also had some great friends there.”

Leaving UMSL with a bachelor’s degree in Spanish, Dunn went on to Southern Illinois University and the University of Utah for graduate studies. He eventually married, had children and grandchildren, played church organ and taught Spanish in several Illinois schools before retiring from Murphysboro High School.

All and all, Dunn said it’s been a “great life.”

Richard Hughes (on the right, row 2, 12th person)
A “small but aggressive” athlete, Richard Hughes had hoped for a football scholarship upon graduating from Lutheran Central High School, now Lutheran North, but no offers ever came. Hughes, who lived with his parents in The Ville neighborhood of north St. Louis, chose UMSL because it was “the best, most affordable university near home.”

Hughes enjoyed playing intramural football on campus. On Fridays, he remembers playing cards and socializing with other students in the student lounge.

One of the first African American alumni of the university, Hughes earned his psychology degree from UMSL but went on to become an attorney after graduating from Saint Louis University School of Law.

His career started in Legal Services of Eastern Missouri until he went into private practice. Hughes also did a stint with The St. Louis Housing Authority in the HOPE VI program, which revitalized struggling public housing projects into mixed-income developments. He retired in December 2016 from Richard G. Hughes & Associates, his own practice, where he worked personal injury, bankruptcy and municipal finance cases.

Hughes has two children and one grandchild and lives in Black Jack, Missouri.

Thomas Jenkins (not pictured)
After Roosevelt High School, Jenkins came to UMSL because of its cost and the need to work during his college career. It turned out to be a fortunate situation.

“My most outstanding memories were in the courses I took from Professor [Charles] Armbruster,” Jenkins says. “He excited me about the field of chemistry.”

Jenkins enrolled in graduate school at the University of Colorado after earning his bachelor’s degree in chemistry from UMSL. His time in Colorado was cut short by a two-year stint in the U.S. Army. Jenkins then took a position with the U.S. Army Cold Regions Research and Engineering Laboratory, where he remained for 38 years. And, yes, he also returned to graduate school and earned his doctorate in analytical chemistry from the University of New Hampshire.

Jenkins has two children and lives in Gig Harbor, Washington.

Irwin Loiterstein (on the right, row 5, eighth person)
Armed with a bachelor’s in business administration, Loiterstein left UMSL to conquer the world of accounting. But somewhere along the way things changed. Loiterstein decided to start his own business.

“After a couple of years I entered the Christmas tree business,” he said. “I eventually became the largest wholesaler and retailer of Christmas trees in St. Louis.”

Graduating from University City High School, Loiterstein says he liked the teachers, programs and UMSL campus in general. He did not indicate if the numerous trees on campus inspired his ultimate career choice.

Marsha Shapiro Silverman (on the right, row 4, first person)
Silverman did two years at MU before deciding to return to St. Louis. Transferring to UMSL allowed her to stay within the UM System and retain her credits. Among her favorite memories are spending time in the old country clubhouse and walking – sometimes in the mud – to what was then the “new” building on campus, Benton Hall, which was completed in 1965.

Graduating with a bachelor’s degree in education, Silverman began her career in elementary education before transitioning to St. Louis Community College where she was an instructor and director of its early childhood center.

Today the University City High School graduate resides in Chesterfield, Missouri, with her husband, David. They have two children and two grandchildren.

Jack Sieber (on the right, row 5, fifth person)
Sieber came to UMSL after three years in the U.S. Marine Corps and with college credits from two other institutions. He was active in student government and served as the first president of UMSL’s Alumni Association, which formed almost immediately after the class of 1967’s graduation.

The business administration alumnus remembers the clubhouse fondly, where advising offices were in what was formerly the ladies locker room. He also recalls the “camaraderie” among students and faculty.

Donald Driemeier, a young finance professor who would become dean of the College of Business Administration, stood out for Sieber. “He offered a lot of advice and became a lifelong friend,” he says.

After graduating, Sieber entered a “hot job market” and joined IBM. He worked in the office printing industry for more than two decades until he started his own company, Quantum Technologies, at the age of 50. Fifteen years later, he sold the company and purchased a retirement home in Mexico.

Sieber says he and his wife, Peggy, will soon leave it behind to return full time to St. Louis to be with their four children and seven grandchildren.