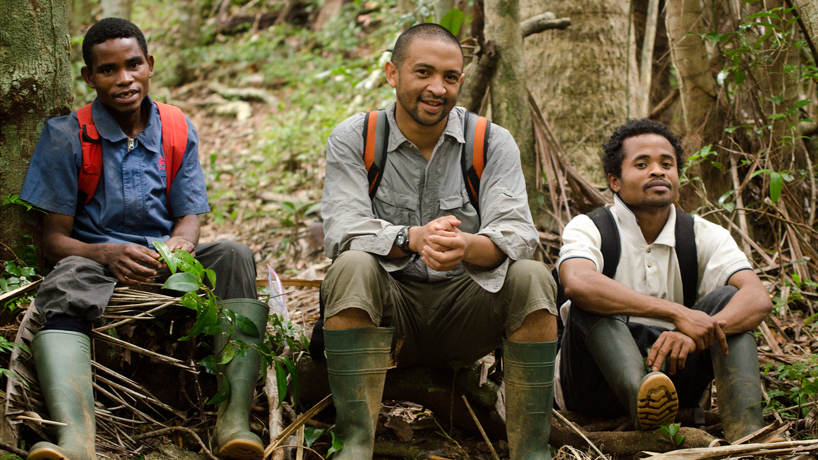 Biology doctoral student Fidisoa Rasambainarivo (center) studies the disease transmission from domestic animals to wildlife of the Betampona Natural Reserve in Madagascar. Accompanying him to set traps and capture animals are natural reserve guides and local veterinary students Flavien (at left) and Victorice (at right). Rasambainarivo’s joint research through UMSL and the Saint Louis Zoo is funded by a fellowship through UMSL’s Whitney R. Harris World Ecology Center. (Photos by Fidisoa Rasambainarivo)

Nearly 10,000 miles from Madagascar at the University of Missouri–St. Louis, Fidisoa Rasambainarivo runs diagnostics on blood samples from his home country’s top carnivores.

The biology doctoral candidate is looking for parasites and viruses that typically affect cats and dogs – canine distemper, canine parvovirus, Toxoplasma and Leptospira.

That may sound odd, but a rapidly growing human population is pushing into the natural wildlife habitat of Madagascar, and along with humans come their domestic animals.

“We are sharing the same habitat a lot of the time,” Rasambainarivo says, “so there are increasing interactions.”

In Madagascar, dogs and cats are usually more of a village or community pet. They are free ranging, often supplementing their diet in the wild. As they venture into the forest, they increase wildlife exposure to domestic animal pathogens. 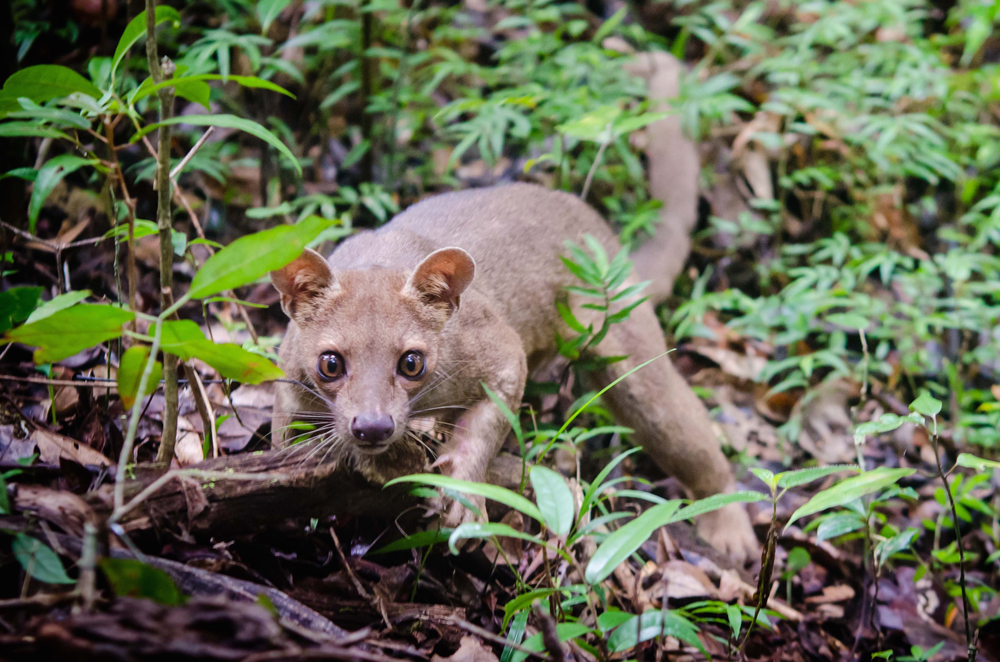 The Cryptoprocta ferox or fossa (pronounced f-oo-suh) is one of the carnivores Rasambainarivo studies and is the apex predator of the Betampona Natural Reserve, although its population (in the few thousand) is dwindling with more and more dogs entering the reserve.

That’s the basis for Rasambainarivo’s research, which aims to codify the disease transmission between domestic and wildlife animals on the Betampona Natural Reserve, one of the last remaining protected lowland rainforests on the island.

“They are largely understudied and endangered animal species of Madagascar,” Rasambainarivo says. “From a disease ecologist perspective, due to their home range, behavioral patterns and habitat preference, they are likely to interact with domestic animals and acquire microbes and parasites from them.”

The fossa (pronounced f-oo-suh) is of particular importance according to Rasambainarivo because it is the apex predator of Betampona, playing an important role in regulating populations at lower levels of the food chain. Fewer fossa causes destabilization in an already threatened ecosystem. Their population number ranges in the few thousands.

Madagascar is considered a biodiversity hotspot in the world. More than 90 percent of its wildlife is found nowhere else on Earth, driving conservation of its unique species. 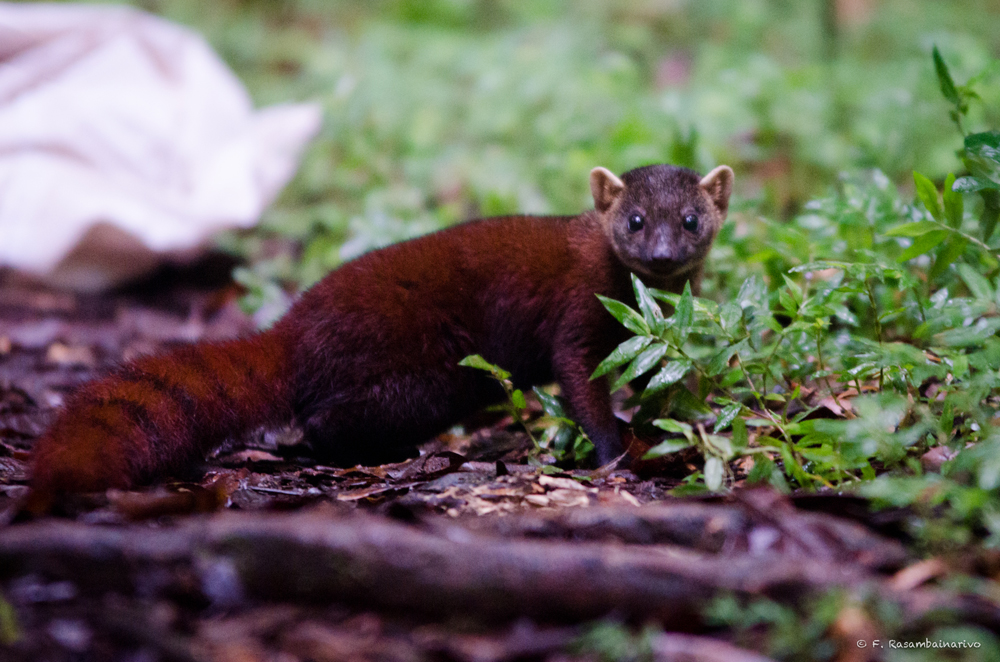 The Galida elegans or ring-tailed vontsira is another carnivore Rasambainarivo studies. Along with the Fossa, its species is also susceptible to canine and feline parasites and viruses.

In the field, he sets up cameras to document interactions between domestic animals and wildlife and possible chances for exposure to pathogens, whether direct or through droppings.

“I have seen a lot of interaction between domestic and endemic animals,” Rasambainarivo says. “More than I thought, dogs are going into the reserve.”

He also sets live traps for wildlife. Once he captures them, he anesthetizes them, takes body measurements, performs a complete physical exam and collects blood, fecal and hair samples.

Rasambainarivo has approximately 70 samples from cats and dogs and about 60 samples from endemic carnivores. He gets permission from domestic animal’s owners, which he says isn’t hard considering it’s in their best interest to have the pet examined and checked for disease.

So far, Rasambainarivo has found that 40 percent of the endemic carnivores from which he has samples have been exposed to the Toxoplasma parasite and 40 percent were also exposed to Leptospira bacteria.

Both Toxoplasmosis and Leptospirosis are zoonotic, meaning they can be passed to humans. 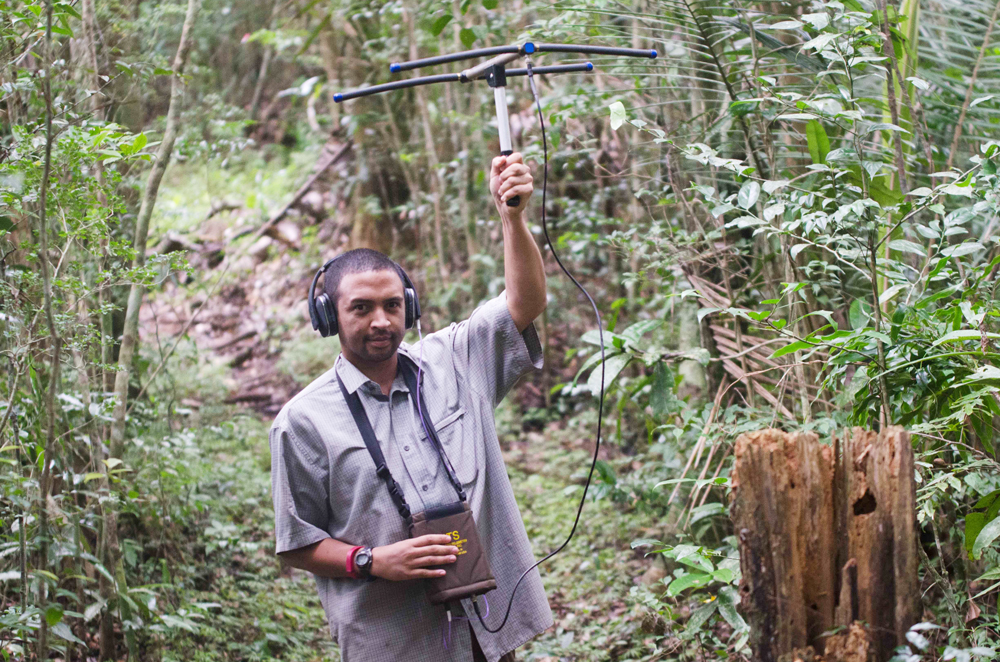 Rasambainarivo holds an antenna that detects signals emitted by the radio and GPS collars he and his team place on captured animals. After performing a physical examination and collecting blood, fecal and hair samples, the team releases the animals back into the reserve. The collars allow the researchers to track where the animals go, how much time they spend in (or close to) villages and what types of habitats they prefer.

For east Madagascar, Rasambainarivo’s study is the first of the region’s kind on carnivores. People have typically studied the island’s lemurs, a more popularly known endangered species from the island.

“It’s important to establish a baseline,” Rasambainarivo says, “so that we can compare year to year and between different sites.”

He also co-wrote a paper last year on disease transmission from domestic animals to wild carnivores in west Madagascar, which was also the first record of its kind.

Rasambainarivo’s hope is that concrete evidence can be used for conservation purposes and possibly substantiate the need for vaccination programs on the island.

He points to successful programs in Tanzania’s Serengeti, where a similar study was done and vaccinations against rabies significantly improved the health of wildlife. He also says there is growing evidence that the canine distemper vaccination may help improve tiger populations.

Rasambainarivo’s research is possible thanks to a graduate fellowship through the Whitney R. Harris World Ecology Center at UMSL, which is a partnership between the university, the Saint Louis Zoo and the Missouri Botanical Garden to support students studying ecology and biodiversity conservation.

Originally working with the Saint Louis Zoo’s WildCare Institute in Madagascar, Rasambainarivo learned of the graduate fellowship opportunity through the Harris Center to conduct joint conservation research at UMSL and the zoo.

He had already earned a master of science degree in epidemiology from Université de Montréal, Canada, and a doctor of veterinary medicine degree from University of Antananarivo, Madagascar, but decided to pursue a PhD in biology from UMSL and gain research experience as well.

Rasambainarivo plans to continue his research and work as a wildlife veterinarian after he graduates in May 2018.

Having worked with the Saint Louis Zoo for 10 years now, he hopes to land a position in Madagascar’s Fauna and Flora conservation group, which is headquartered at the zoo.