6 outstanding UMSL alumni in the spotlight at Founders Dinner 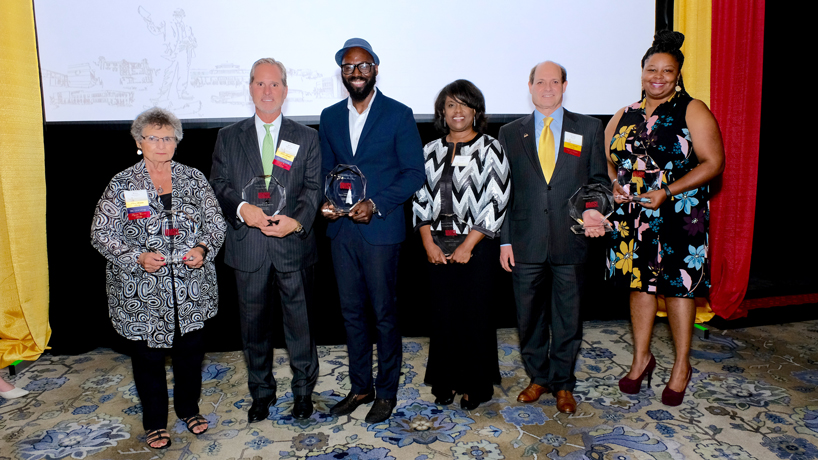 The recipients of the 2017 Distinguished Alumni Award include:

Gary Jacob, BS chemistry 1969, who currently serves as the chairman and CEO of Synergy Pharmaceuticals Inc., a public, Nasdaq-listed biotechnology company he helped found in 2000. Synergy specializes in drug treatment therapies for gastrointestinal disorders and diseases. Jacob is a co-inventor of Synergy’s flagship drug, plecanatide, branded as TRULANCE™, which received FDA approval in January of this year and was formally launched to treat patients in March. Throughout his career, Jacob has amassed more than 30 years of experience in the pharmaceutical and biotechnology industry. From IBM to Monsanto to G.D. Searle and now Synergy, Jacob has been committed – every day – to improving the quality of life for millions of people. He is also committed to UMSL and its students through his service on the Chancellor’s council.

Sandra Marks, BSBA marketing 1981, the senior vice president at Clayco, a St. Louis- and Chicago-based design and construction firm with a global reach. Among her many duties, Marks addresses external areas of outreach and alignment of community resources – and plays a critical role in strategic planning for the entire Clayco enterprise. She also focuses on talent development, including initiatives aimed at increasing the hiring, retention and promotion of minorities and women.  In 1986, Marks founded Marks & Associates to respond to similar talent gaps in the nontraditional business and market sectors. Under her direction, the firm has become a leader in the development of minority- and women-owned businesses and community programs nationwide.

Brian Owens, BM music performance 2008, a singer and songwriter with a social conscience that has taken him to performance venues around the world, including the Ellen DeGeneres Show in Los Angeles, the Apollo Theatre in New York and the Blue Note in Tokyo. While serving in the Air Force, Owens and the musical group Sidewinder toured the Middle East and performed at the White House. A resident of Ferguson, Missouri, Owens has a tireless commitment to uplifting the community through the gift of music. As an artist in residence with the St. Louis Symphony, he oversees the IN UNISON scholarship program. He is also the community music artist in residence with the E. Desmond Lee Fine Arts Collaborative at UMSL and is the founder and CEO of LIFE Arts Inc. – a nonprofit that provides leadership opportunities for urban youth. His latest album, “Soul of Cash,” will be released this week.

Joe Stieven, BSBA finance 1982, MBA business administration 1985, who is well known in the St. Louis business community and beyond as a successful investment manager. He began his career as an analyst examiner at the Federal Reserve Bank of St. Louis. Later, Stieven joined Stifel, Nicolaus and Company where, over the course of 20 years, he rose to senior vice president and director of the Financial Institutions Research Group. In 2005, Stieven founded Stieven Capital Advisors, a registered investment advisory firm that manages an estimated $567 million in assets. He served on the Financial Accounting Standards Board’s Investors Technical Advisory Committee from 2012 to 2015 and is recognized as the top sell-side research analyst for the Midwest region by the American Banker. Later in the evening, Stieven and his wife, Mary, were also recognized for their generous philanthropy at UMSL.

Rita Swiener, BA psychology 1970, founder and executive director of Santa’s Helpers, Inc., a St. Louis-based nonprofit that brings joy to children and families in need each holiday season. She founded Santa’s Helpers in 1968 while still a student at UMSL. Over the years, even as she fulfilled her dream of becoming a professor and licensed clinical therapist, she never lost focus on the children. She has used her influence and negotiating skills to drive the growth of Santa’s Helpers for nearly five decades. As a result, the organization now serves over 2,700 under-resourced and seriously ill children each year. Swiener also spent 15 years on the board of directors of Call for Help, Inc., an Illinois-based nonprofit whose mission is to foster communities free of poverty, homelessness and violence. She has been nationally recognized for both her philanthropic and classroom contributions.

This year’s Outstanding Young Alumni Award recipient is Antionette Carroll, BS media studies 2009, MA communications 2012. Carroll is the founder and CEO of Creative Reaction Lab, a social enterprise that educates and challenges cities to co-create solutions with black and Latinx populations. She founded Creative Reaction Lab in 2014, in response to the conflict she witnessed in her Ferguson, Missouri, community after the death of Michael Brown. The organization’s ultimate goal is to design healthy and racially equitable communities. Carroll has worked for a variety of social justice, human rights, and diversity and inclusion nonprofits. She is the chair emerita of the diversity and inclusion task force for AIGA: The Professional Association of Design. She also serves as president of AIGA St. Louis and is co-founder of the Design plus Diversity conference and podcast.