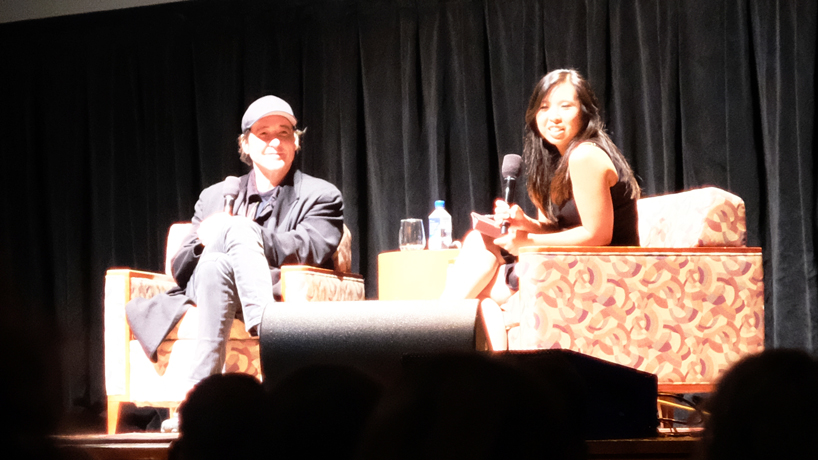 John Cusack participated in a conversation with St. Louis Public Radio reporter Eli Chen (right) and took questions from the audience after a screening of the 1989 film “Say Anything” at the Blanche M. Touhill Performing Arts Center on Friday night. (Photo by David Morrison)

A member of the audience had something very important to tell John Cusack at the Blanche M. Touhill Performing Arts Center on Friday night.

“I’ve been in love with you since I was 14 years old,” she said, grasping the microphone stand during a Q&A session that followed a showing of the 1989 film “Say Anything,” which stars Cusack.

She went on to describe how she saved up her allowance and bought a $1.25 ticket to see one of Cusack’s earlier movies: 1985’s “The Sure Thing.”

“I came out of there a better person because I realized I liked funny guys and not cute ones,” she said to peals of laughter from the crowd and a look of faux offense from Cusack.

That sense of attainability and accessibility came up time and again during Cusack’s appearance on the University of Missouri–St. Louis campus, one stop on a 17-city tour of “Say Anything” screenings and conversations with Cusack to help celebrate the film’s 30th anniversary.

A large, energetic Touhill crowd hung on Cusack’s every word during a conversation with St. Louis Public Radio | 90.7 KWMU reporter Eli Chen and the 35-minute Q&A that followed, which covered everything from Cusack’s career to his active social media presence to whether he needed a date for the St. Louis Blues’ Stanley Cup victory parade the next day.

“What time does it start? Noon?” Cusack asked. “So people are going to be day drunk.”

And, of course, the biggest ovation of the night came during the iconic scene with Cusack hefting a boombox over his head in a grand, romantic gesture outside of his ex-girlfriend’s window, Peter Gabriel’s “In Your Eyes” blaring out of the speakers.

No boombox, though. Touhill Director of Events Shelley Dotson playfully warned before the show that those weren’t permitted.

“I don’t think it would be the same nowadays,” Cusack said. “You’d be holding up an iPhone over your head. With earbuds in.”

Over his 36-year career, Cusack has carved out a niche as a sort of everyman actor, producer and writer who embodies roles and makes movies in which his fans can see themselves. But he’s not afraid to put himself out there for more experimental roles in movies such as “Being John Malkovich” in 1999.

“If you want to be an artist or an actor, you’ve got to have a problem. If you want to be a good actor, you’ve got to kind of solve your problem,” Cusack said. “But no matter what your problem is, you have to like risk. If you see something that’s really out there, part of you just wants to jump right in and see how much trouble you can get into. Which is kind of like my motto. If I had one.”

Cusack is also willing to take stands in public life, as evidenced by his political activities. He’s on the board of directors of the Freedom of the Press Foundation and has been an especially prolific Twitter poster since the election of President Donald Trump in 2016.

Just don’t call him an “activist.”

“I think that’s a new word to describe what used to be a citizen,” Cusack said. “It’s just being a good citizen: We should speak out, look out for each other, tell the truth, hold powerful people accountable, powerful structures and institutions. Twitter is sort of curation, graffiti, and you can counter narratives, put things out there.”

While he uses Twitter as a mode of expression, Cusack said he also worries about everyone disappearing behind their screens. That’s why he enjoys opportunities like Friday night, when he gets the chance to meet fans face-to-face.

“If something’s good, it doesn’t matter what you say,” Cusack said. “(Fans) will find it. You just sort of stand back and let people interact with it.”