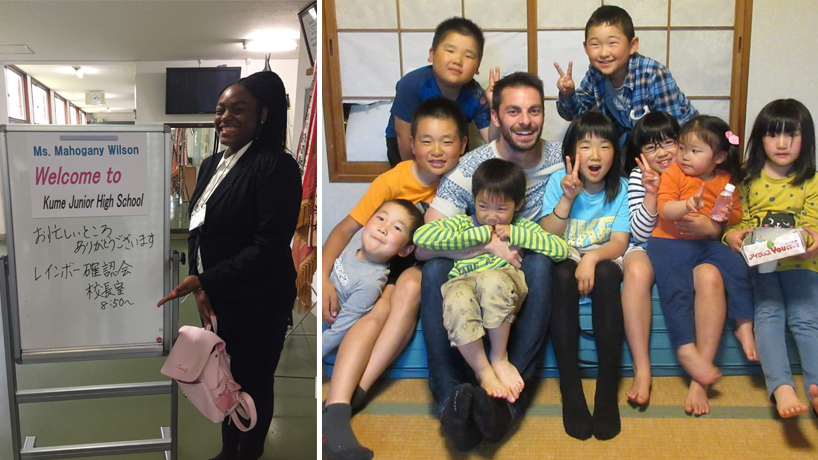 UMSL alumni Mahagony Wilson (left) and Robby Suozzi were accepted into the selective Japan Exchange and Teaching Program. They landed in Japan in April and will serve as assistant language teachers in elementary and middle school classrooms. (Submitted photos)

Early in the morning when both she and the sun have barely risen, Mahogany Wilson will walk onto her balcony.

She’ll pause for a moment to marvel in the beauty of the mountains rising around her and dream of the nearby beaches and hot springs. When she’s done peering upon the rural Japanese landscape of the Chūgoku region, she’ll video call her family so the St. Louisans can witness the picturesque scene as well.

“It’s so beautiful here. I’m actually blown away,” Wilson said from the southwestern section of Japan’s main island. “This region has some amazing natural scenery and all the tasty crab you can eat. It’s breathtaking. I’m trying to get into the nature scene because I’m a city girl through and through. Me and the insects, that’s a long story.”

This area of awe-inspiring sights will be the University of Missouri–St. Louis alumna’s home to gaze at and explore for the next year.

She arrived in April to begin working as an assistant language teacher for the Japan Exchange and Teaching Program. Over the course of her yearlong contract, she’ll help teach English to elementary and middle school students.

Wilson and fellow UMSL graduate Robby Suozzi are two of the 1,000 Americans participating in the selective JET Program. The Japanese government globalization initiative first launched in 1987 and has since matched 66,000 global participants with schools, boards of education and government offices throughout the country.

“I love it here,” Wilson said. “The people are always friendly and welcoming, and so far my job has offered me total fulfillment.”

A lover of languages, Suozzi makes for a passionate and understanding assistant teacher. He knows the patience required to practice a new language and the persistence it takes to maintain the ability.

When he decided to learn Japanese as an adult, he struggled getting started.

“At one point, I was in New York studying theater and wanted to teach myself Japanese,” he said. “I bought a textbook but never opened it.”

Luckily, he found his way back to St. Louis and enrolled in some entry-level language courses at UMSL. He was impressed by the university’s culture, education quality and caliber of instructors.

Suozzi now hopes to replicate the experience for his students in rural areas of the Toyama Prefecture.

“I’m just trying to be an energetic, positive influence in the school, especially in the classroom,” he said. “I know their education system can tend to be very old-fashioned. You sit there, listen and just reply. I’m trying to be smiley, happy-go-lucky to show education can be fun, learning language can be fun – not boring and mundane.”

Teaching is mostly new territory for Suozzi, who graduated from the Department of Language and Cultural Studies in 2018. He served as a teaching assistant for a globalization course when he studied abroad at Toyo University in Tokyo and also back at UMSL for first-year Japanese language students.

But he now has a new demographic with students ranging from third to ninth grade. With this mixture of ages, energy and interest, Suozzi’s had to quickly develop his teaching style.

“I certainly will have an appreciation for the differences in our education systems and the differences in how Japan raises children compared to the U.S.,” he said. “I think I am going to grow a lot as a person from this experience.”

While teaching might not be Suozzi’s long-term career, he believes the JET experience will bring him closer to his desired path. He would like to spend at least a decade living in Japan and possibly begin studying international relations or sustainability initiatives.

“I always wanted to come back over here in some way and keep up with my Japanese language abilities,” he said. “I’ve always enjoyed the education atmosphere. I figured this would be a good way to do something that I enjoy while having a chance to get back over here and potentially lead toward other career avenues.” 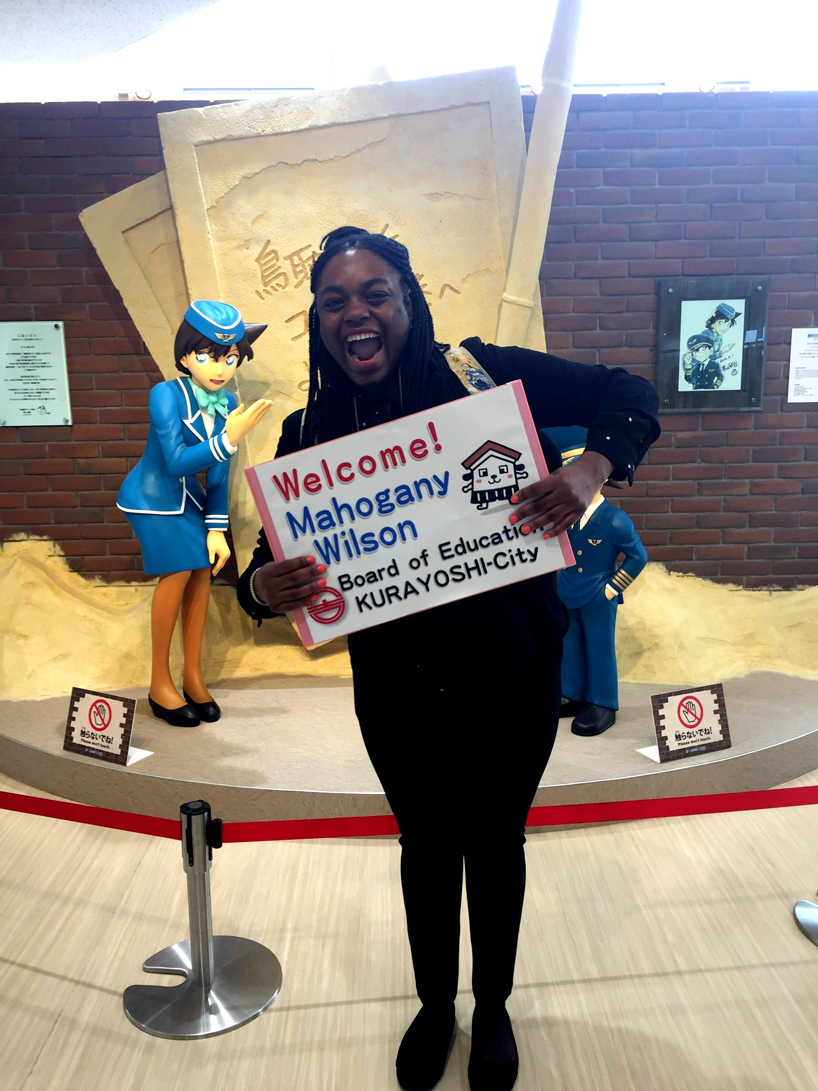 With her dark skin tone, some of Wilson’s students and other residents question if she’s lying about her heritage – not because she’s untrustworthy but because they don’t know any other black Americans.

“Someone recently phrased a question, ‘Why wasn’t I from Africa,’” she said. “I was taken aback because the person wasn’t aware of American history or slavery or the simple fact that black people live in America. He had sheer shock because he could not fathom black people living in America.

“I realized at that moment that diversity needed to be spread. As a representative of black people in America, I felt it was a duty that I have to spread awareness.”

Now that she’s serving as a cultural ambassador, Wilson’s not taking the responsibility lightly. She passed up acceptance into the Peace Corps and a Korean teaching program to participate in JET, so she hopes to make a wide-ranging impact.

While she’s freshly into her JET work, Wilson hopes her global adventures are just beginning.

“Living out my dreams has made me more hungry,” she said, “more curious to step out into the unknown.”