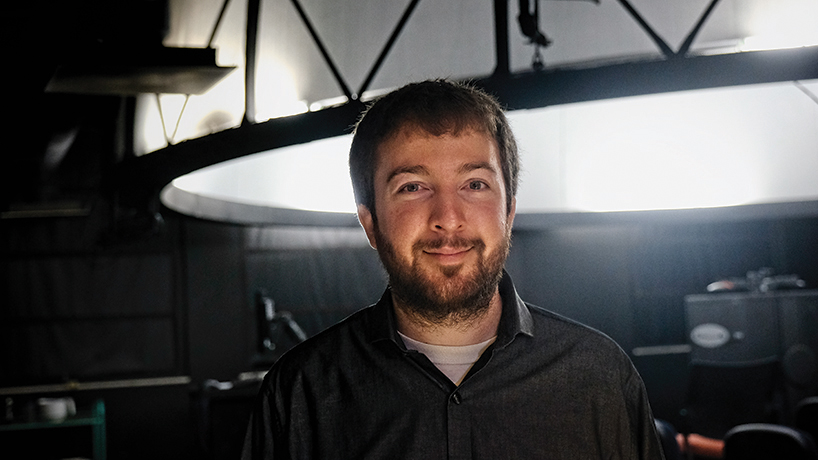 Nathan Roth didn’t plan on getting into comets when he came to the University of Missouri–St. Louis as an undergraduate student.

He knew he wanted to study physics, but it wasn’t until his junior year when he took an astrophysics course with Professor Erika Gibb that he discovered his interest in protoplanetary disks, dense clouds of dust and gas surrounding certain stars.

He landed a summer research position in Gibb’s lab and, from there, transitioned to studying comets with her.

“It was sort of an accident,” he says. “I fell into it. But once I started, I really loved it.”

It has all been part of a journey that has taken him from a BS and PhD at UMSL to NASA’s Goddard Space Flight Center, where Roth started a highly competitive postdoctoral fellowship in September.

As a graduate student, Roth picked up a NASA Earth and Science Fellowship. He worked at UMSL’s own Richard D. Schwartz Observatory before moving on to bigger telescopes – eventually flying to Mauna Kea, Hawaii, to use the iSHELL spectrograph at the NASA Infrared Telescope Facility. He observed firsthand the comet 46P/Wirtanen’s close approach in 2018.

“My program has given me opportunities I’d never dreamed of,” Roth says. “I’ve gone across the country and traveled the world. I’ve observed comets with state-of-the-art telescopes. I mean, I’m going to start a postdoc at NASA.”

But landing the fellowship certainly wasn’t easy. Gibb, his thesis advisor, was an invaluable mentor.

“She taught me everything I know,” he says, “Analyzing data, writing funding and observing proposals, everything.”

Roth also credits much of his success to his outstanding colleagues and the connections he made through the physics program.

For his work at UMSL, Roth analyzed comets’ compositions by looking at their comas, or tails of ice and dust, using single telescopes. At NASA, he’ll be utilizing the 66-dishes of the Atacama Large Millimeter Array – the most sensitive radio array in the world. He’ll be synergizing the near-infrared work he did at UMSL with radio and submillimeter observations, which will allow him to look for more complex molecules, including organics like sugars and simple alcohols.

Eventually, when the much-anticipated James Webb Space Telescope launches, he’ll be working with that, too.

“It’s designed to peer back to the furthest reaches of the universe, so its sensitivity to things in our solar system will just be incredible,” Roth says. “It’ll revolutionize our understanding of comets.”

He’s got many more questions he wants to answer at NASA.

But all this had to wait. After he and his wife relocated to Maryland in early September, Roth immediately flew to Spain for training on the IRAM 30m radio telescope in the Sierra Nevada mountains. After that, he whisked away to Geneva, Switzerland, for an American Astronomical Society conference.

But Roth doesn’t mind his own life’s far-flung orbit.

“It’s nuts – but also fun,” he says, “I love the fast-paced nature. I wouldn’t trade it for anything.”