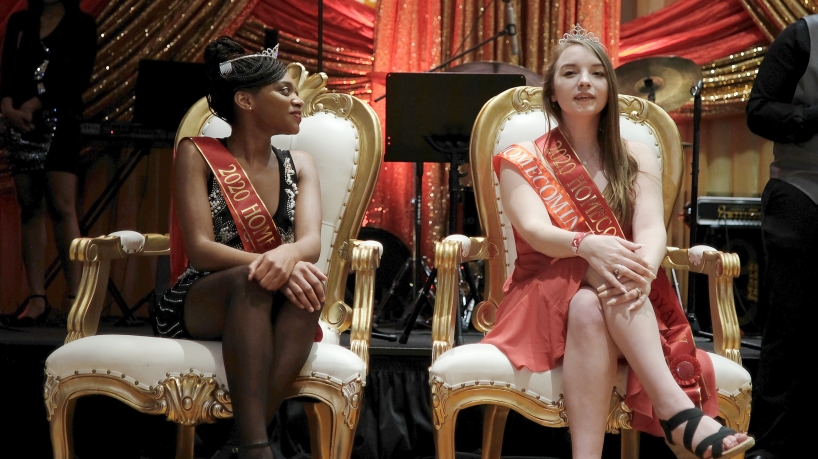 Homecoming week ended with a glitzy Dinner & Dance on Saturday night at Hilton at the Ballpark.

UMSL Daily was able to catch up with Jacobs to discuss homecoming and life as an UMSL student.

Tell me a little about the organization that sponsored you.

Zeta Tau Alpha’s philanthropy is breast cancer education and awareness, so if you see pink ribbons around campus that say “Think Pink,” that’s us. We’ve been at UMSL since the 1970s and have been a national fraternity since 1898. ZTA and Greek life as a whole have really transformed me into the person I am today and given me so many experiences and opportunities to grow, along with an endless support system.

What does being homecoming royalty mean to you?

So much! As a first-generation college student, the thought of going to college was a stressful one for both me and my parents. I had to move from my hometown of Jefferson City to the big city of St. Louis. Over the past three years, my family and friends have been supporting me up close and from afar to help me overcome the challenges of life and college. To be a homecoming royal means that all of my efforts and struggles have paid off, and it shows how much the UMSL community believes in me. It’s an amazing honor, something I never thought would be possible as a first-generation student.

What was your favorite part of homecoming week?

Pack the Stands was where I initially met my sorority sisters in my first year at UMSL, so the event has a lot of sentimental meaning to me. Pack the Stands this year was especially meaningful, as my aunts and mom came from Jefferson City to support me, along with my boyfriend and sorority sisters. It was amazing to see and hear all of these people supporting me and made me so happy and thankful for the opportunity to represent them.

What originally drew you to UMSL?

The idea of living in St. Louis. Before coming to UMSL, I had only been in St. Louis two or three times. Lauren Bledsoe was my UMSL Admissions representative in high school, and she really made sure that UMSL welcomed me with open arms. The financial support and scholarships I received made UMSL affordable.

My favorite UMSL memory is definitely being crowned homecoming royalty. Before that, it was a tie between helping students as a New Student Programs orientation leader and seeing the impact I made on the surrounding community during service projects. As an orientation leader, I had the opportunity to work with new and transfer students during their adjustment into college. So many students will come up to me and say, “Hey! You were my orientation leader my first year!” It’s amazing to know that I had such an impact on them and the connections they have made at UMSL.

In my years at UMSL, I have also participated in a variety of service projects such as serving meals at the American Cancer Society Hope Lodge, volunteering at the Saint Louis County Pet Adoption Center and at the St. Jude 5K. Seeing firsthand the impact that UMSL and I have made on the individuals involved makes it so meaningful and memorable to me. UMSL puts such an emphasis on service, and it’s amazing to know that the projects we do have such an impact.

What are your future goals?

I’m graduating this fall semester with a bachelor’s in business administration with an emphasis in marketing and a minor in graphic design along with a Pierre Laclede Honors College certificate. After graduation, I’m hoping to return to school for my master’s degree. Ultimately, my goal for the future is to be happy wherever life takes me.

What advice would you give future UMSL students?

Take whatever opportunities come your way. I would never be where I am without getting out of my comfort zone or trying new things.