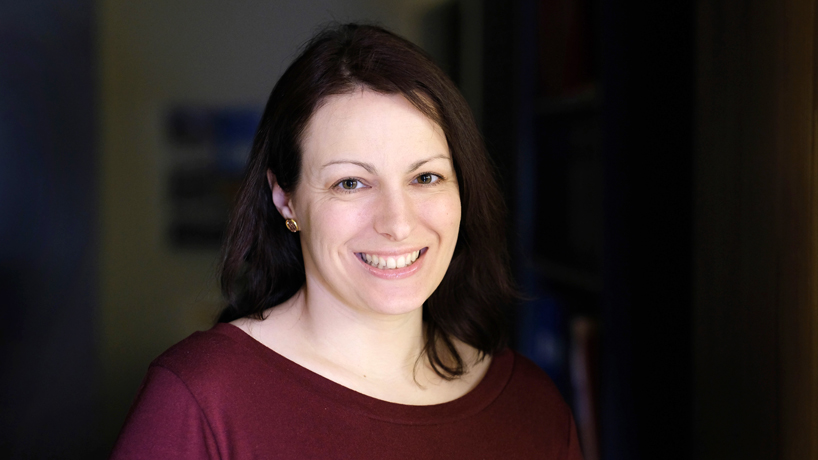 The Association for Education in Journalism and Mass Communication awarded Assistant Professor Stephanie Van Stee and her colleague Viorela Dan of Ludwig-Maximilian University of Munich, an Emerging Scholars grant to research mixed messaging in the disclosure section of pharmaceutical advertising. (Photo by August Jennewein)

Watch television enough, and the pharmaceutical commercials can start to feel inescapable.

They appear often during prime-time programming and across multiple cable networks. One might be for a medication said to help lower blood sugar in diabetes patients, another for a drug intended to lower the risk of heart disease, still another for a pill that combats a skin disorder such as psoriasis.

These ads often begin with a focus on a single individual offering a testimonial about the product, what it does and all the reasons it’s “right for me.”

Inevitably, the focus has to shift to a disclosure of the potential side effects of the medication, and when it does, the audience no longer hears from the central character. Instead, a disembodied voice reads through the list of issues – headaches, constipation, diarrhea and fatigue to name a few – as visuals flash on the screen of the protagonist dining out with friends, going on a picnic with family members on a pristine afternoon or playing softball or basketball.

Many ads have enough time to bounce between more than one of these scenes before getting through the full list.

Stephanie Van Stee, an assistant professor in the Department of Communication and Media at the University of Missouri–St. Louis, knows that’s no accident, and she is researching the effect the mismatched images can have in direct-to-consumer pharmaceutical advertising.

Last month, the Association for Education in Journalism and Mass Communication awarded Van Stee and her colleague, Viorela Dan of Ludwig-Maximilian University of Munich, an Emerging Scholars grant to assist with the research. Theirs was one of three projects selected from a competitive pool of applicants.

“Our hypothesis is that these positive visuals with the kind of negative or risky side effects in the audio are distracting from those side effects, so people aren’t able to recall them as well,” Van Stee said. “It could be leading to people who are less informed about potential risks, so they’re coming away with an idea of ‘Oh, here are the great things that can do for me,’ which the visuals help to emphasize.

“People think, ‘Oh, now they’re happy, and they’re hanging out with their friends and they’re biking, swimming and partying and whatever else.’ They’re not really remembering those potential side effects.”

That can cause real harm if people, influenced by advertising, end up pushing their doctors to prescribe them pharmaceuticals that turn out to be wrong for their wallet and their health.

Direct-to-consumer pharmaceutical advertising has been prevalent on American television screens since the late 1980s, and the U.S. Food and Drug Administration regulates them.

That law does not require that risks and benefits be given equal time nor does it stipulate the manner in which both are conveyed to would-be consumers.

Pharmaceutical advertisers have become more sophisticated in their messaging.

“One of the things that we’re interested in is the ethical implications of how they’re portraying the side effects because of the potentially distracting visuals that are mismatched and the level of visual complexity that’s shown on the screen during that section,” Van Stee said.

She and Dan have collected examples of these televised direct-to-consumer advertisements, and they’re completing a content analysis, noting what drugs are being advertised, what medical conditions they are intended to treat and what images accompany the disclosure section of each ad. They’re also looking at the visual complexity of each ad – specifically how many different image changes and camera angles are used and how many characters are filling the screen.

They plan to use that information to construct an experiment in which they vary the degree to which the visuals don’t match the side effects and also test the effects of different visual complexity.

“There’s research that suggests that the more visual complexity there is, the more difficult it is to recall the message,” Van Stee said.

Van Stee and Dan intend to use an outside firm to conduct a survey using a national sample of people.

The grant requires the research to be completed by next February, but they are scheduled to present some of their preliminary work at the AEJMC annual conference scheduled for Aug. 6-9 in San Francisco.