UMSL College of Optometry alumna Dr. Marcy O’Neil (left) is one of the preceptors in the Norton Sound Regional Hospital eye clinic who supervises fourth year clinicals for students such as George Dowdy (right) in Nome, Alaska. During his eight-week rotation, Dowdy helped care for the vision of Alaskans Natives in Nome and in some of the 15 indigenous villages the eye clinic serves. (Photo by Michael Burnett)

Within minutes of stepping off the bush plane, George Dowdy’s goggles fog. The condensation freezes into two large cataracts until all he can see is white instead of the lone airstrip in the village of Wales, Alaska. When he removes his eyewear, cold strikes the now- exposed skin, but it’s nothing compared to what’s seeping through the soles of his boots from the frozen ground. Wind whips snow from the ground around him, and the sky is the cloudless blue that Dowdy has come to associate with extreme cold.

At minus 54 degrees with wind chill, today is the lowest temperature that the University of Missouri–St. Louis optometry student has experienced since arriving in neighboring Nome four weeks earlier for a clinical rotation in the eye clinic at Norton Sound Regional Hospital. Standing there waiting for a snowmobile pickup with his preceptor, alumna Dr. Marcy O’Neil, and 10 suitcases of equipment, might have been painful if Dowdy hadn’t deliberately chosen to visit during the coldest, darkest part of the year. 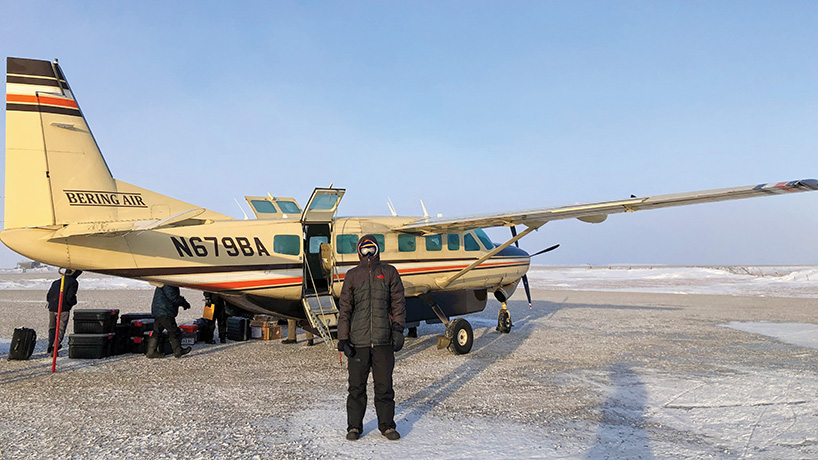 George Dowdy steps off the bush plane onto Wales’ one airstrip. (Photo by Marcy O’Neil)

“It’s the most different thing you’ll ever experience,” Dowdy says. “From the hospital we get quite a view of the town and the Bering Sea, but now it’s all frozen. One of my preceptors and I walked out there probably about a half mile. That was something else. I’ve never stood on an ocean before.”

For all the delight Dowdy feels about the weather, it has presented some logistical problems. O’Neil and Dowdy had intended to set off for Wales and Little Diomede – two of 15 indigenous villages that the eye clinic serves – the previous Sunday for a six-day trip, but snow and crosswinds kept them grounded.

“We’re expected to at least try to get out to each village once a year,” O’Neil says. “Little Diomede has been very difficult. I tried three times in the last six months, but weather has socked us in, and we have not been out there in a year and a half.” 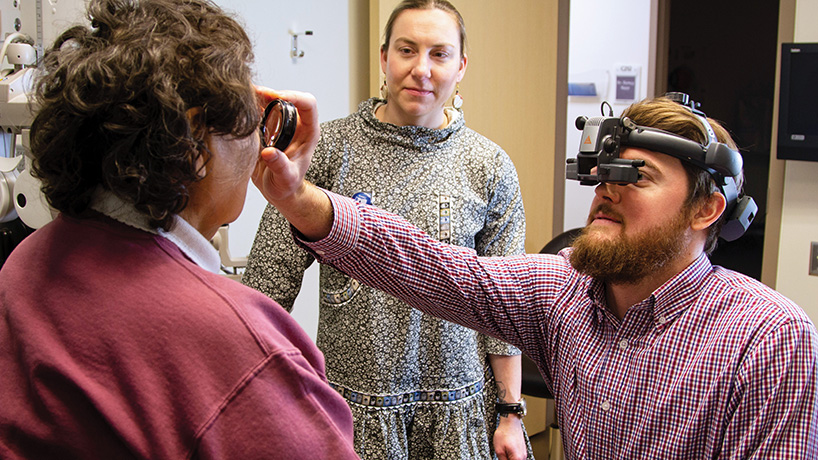 This trip would be no different. Travel to the village, an island in the Bering Strait that lies just 2 1/2 miles from the Russian Big Diomede, has become increasingly challenging with climate change.

The two had finally received clearance to fly four days later, arrive at 2:30 p.m. and start seeing patients within a half hour in Wales’ school. It is the only building with running water after a burst pipe. When they leave 24 hours later, they’ll have surpassed their goal of 20 by six patients.

Thanks to a Norton Sound Health Corporation community health aide practitioner who uses a robust telemedicine program to stay in communication with the Nome clinic, O’Neil and Dowdy start with known patients with serious, ongoing conditions such as glaucoma or diabetes. Then they move on to vision checks.

Throughout the day, Dowdy learns to move efficiently and effectively. Treating family groups adds a new challenge as does learning about common Native Alaskan nonverbal communication, where a raised brow means yes and a furrowed one no. 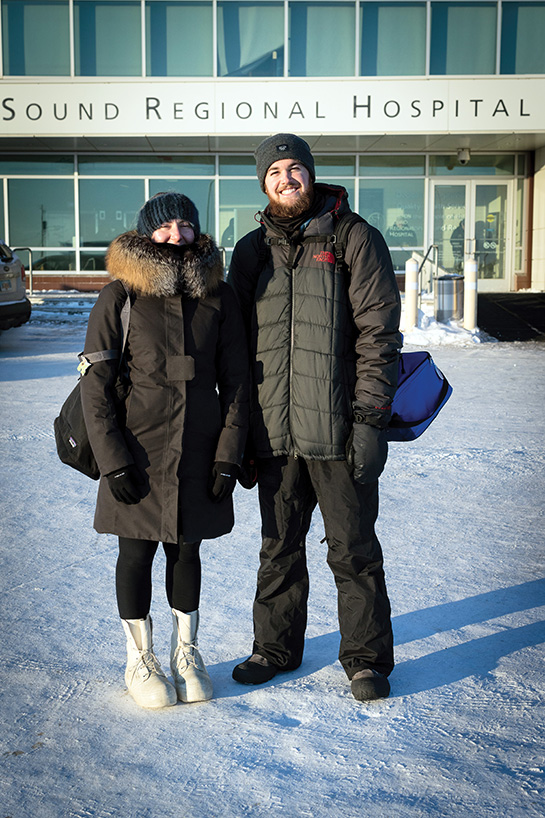 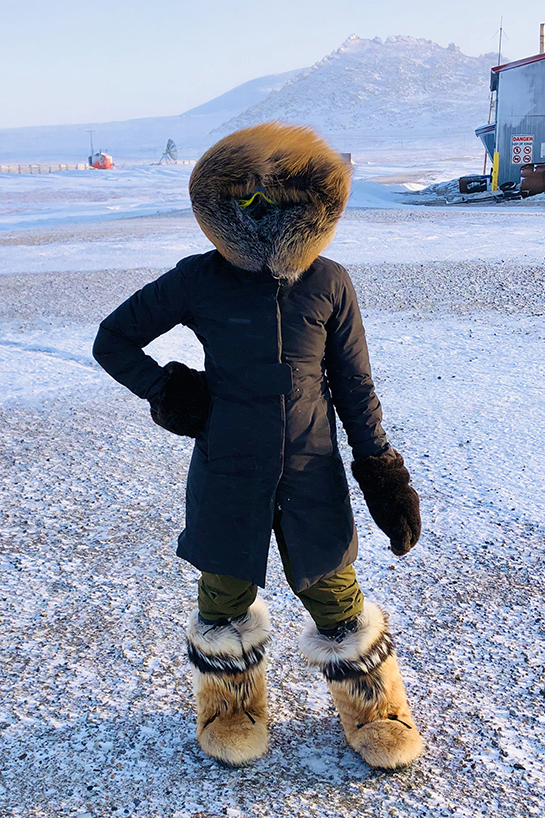 Marcy O’Neil pulls up her hood in deference to the cold in Wales. (Photo by George Dowdy)

Even more than new knowledge and skills, the biggest takeaway for both practitioners is cross-cultural exchange.

“They love to tell their stories and their adventures,” Dowdy says. “There’s the utmost respect to the Native Alaskan elders, the older population. I’ve learned each village is known for a craft, whether it’s carving or making mittens or boots out of different furs. With Nome being a small town, everyone is so connected and knows each other.”

O’Neil can speak to the draw of Nome more than most transplants.

For her last rotation before graduating in 2010, O’Neil reached out to Dr. Kamey Kapp, director of eye services, and asked if she’d take a student. That was the start of an ongoing relationship between UMSL and Norton Sound.

NSHC, a tribally owned and operated health consortium, consists of 15 village clinics and the Nome regional hospital, which houses an eye clinic with more technology than the main hospital in Anchorage. The hospital serves approximately 10,000 Inupiat, Siberian Yupik, Yup’ik peoples and others from Nome and the surrounding areas. That all makes it an excellent training ground for UMSL students.

Fourth year optometry students do six eight-week clinical rotations with the goal of working with a variety of doctors and patients in diverse settings, which range from on campus to hospitals to private practices. The hope is that students gain on-the-job knowledge while figuring out what their future practices should be like. That proved especially true for O’Neil. 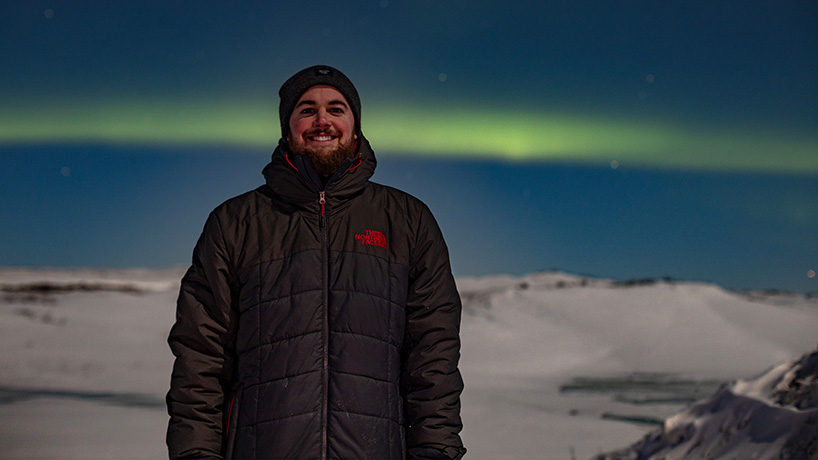 A benefit of visiting Nome in the winter was glimpsing the Northern Lights. (Photo by Michael Burnett)

After school, she joined the U.S. Air Force but worked as a contractor in the Nome eye clinic before starting officer training school the following spring. After leaving active duty, O’Neil would return to Nome as a fill-in optometrist. When a full-time position opened up two years ago, O’Neil happily took the spot.

“When students get to see, ‘Oh, there’s stuff going on within the United States that doesn’t impact me on a daily basis back at home,’ that’s more world knowledge,” she says. “It helps them understand different viewpoints and have a better understanding of where other people are coming from.

“You’re working with people who live on the edge of the earth. It’s a normal day when a patient will come in and say, ‘I was chopping up a whale, and I got some bone in my eye.’ We’re getting to see things that you would never get to in the Lower 48, and we become close to the patients. They become our family, and it’s very family oriented up here. Nome is a special place.”