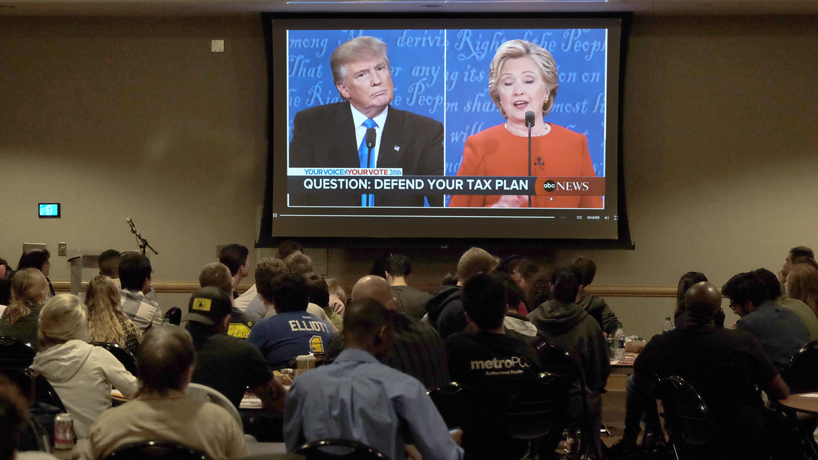 During the eight-week course, Associate Teaching Professor Peter Acsay and staff member Blaine Milligan asked UMSL students to examine why some people feel that their votes don’t count in presidential elections. The students discussed the history and mechanics of the Electoral College as well as proposing and voting on the five different reforms or replacements for the current system. (Photo by August Jennewein)

These wins are possible due to a unique American political system: the Electoral College. But the results of these elections, which seem to be at odds with the general public’s will, have left many Millennial and Gen Z voters wondering, “Does my vote even count?”

“When you talk to people and you talk about politics, you almost always hear, ‘Well, my vote doesn’t matter, so why should I get involved?’” Milligan said. “We wanted to try to tackle that issue from the perspective of a history class. We looked at how our elections are broken and how that plays into the concept of ‘my vote doesn’t matter.’”

The eight-week, online course was introduced during the spring semester and will be offered again during the upcoming fall semester, just in time for the next presidential election. Acsay and Milligan asked their students to consider ways to reform or replace the system or if it should remain in its current state.

The class culminated with students proposing and voting on the five different reforms and replacements they selected. Staying true to the spirit of the course, they cast ballots using two different voting formats.

Many students weren’t well versed in the Electoral College going into the class.

“They weren’t very knowledgeable,” Acsay said. “They knew in two elections the popular vote winner didn’t win. That they knew, but they weren’t really sure about the details of the College itself. So, we walked them through that.”

Milligan focused on more recent elections due to his on-the-ground political experience with campaigns.

“We talked about swing states and the Electoral College, how sometimes the Electoral College didn’t meet the same result as the popular vote and what we would do to fix that,” he said. “There was a lot of discussion about how this could help third parties and how this makes people feel more like they do have a voice if we make these changes instead of focusing on five states.”

“Those two fundamental aspects of it didn’t even last until the election of 1800 when Burr and Jefferson tied. The original intent, much of it was abandoned very quickly, so we talked about the rhetoric of the Founders and Framers.”

Students also grappled with other defenses of the Electoral College. The most common reason brought up in their discussions was the idea that it protects small states. Acsay noted that small states do not vote overwhelmingly for one party, and for roughly the last century, there haven’t been clear electoral issues between big states and small states. Given that, he doesn’t believe small states will be disenfranchised by the popular vote.

Many students were open to rethinking the system, but there were still a few who wanted to hold onto the current system.

“We had one student, and I would challenge him,” Milligan said. “It wasn’t meant to be an argument, but he would mention that if we switched to a popular vote model, states like Nebraska, South Dakota and Iowa would never get any attention. And I said, ‘Are these states getting attention now? When’s the last time a presidential campaign went to South Dakota or Nebraska?’”

Milligan explained further that the states that get the most attention during an election cycle are the most competitive, regardless of size. They are what have come to be known as swing states.

With those lessons in mind, the students devised five options for reform or replacement of the Electoral College. Students came up with two options that offered proportional solutions for reform.

The final winner, though, was a ranked-choice popular vote in place of the current system. Interestingly, when the students voted on the options in a straight popular vote, it won only 43 percent of the vote – a plurality but not a majority. Eventually, it was deemed the winner in a ranked-choice vote after three other choices had been eliminated.

Overall, Acsay and Milligan were impressed by their students’ willingness to get into the “nuts and bolts” of the system, and they expect another lively class this fall.

“I felt that I had more seriously engaged students in all aspects of the course than almost anything I’ve taught in a long time,” Acsay said.