The UMSL Japan-America Student Association organized a virtual origami lesson to celebrate Bunka no hi, or Japan’s Culture Day. Participants folded four origami shapes over an hour: a samurai helmet, a flower, a heart and a balloon.

Iba made a series of deft folds while holding the shape up to her computer’s web camera. Suddenly, what had been a miniature paper helmet took on a tail and became a goldfish.

Iba, who is the cultural exchange facilitator for the Grassroots Exchange Network-Japan Program, walked a dozen University of Missouri–St. Louis students and faculty through the creation of four origami shapes during a virtual class held on Nov. 12. The event was sponsored by the UMSL Japan-America Student Association and organized by its faculty advisor, Associate Teaching Professor of Japanese Keiko Ueda and Molly Motes, JASA president and BA student, who served as event host.

An effort of the Center for Global Partnership, the GEN-J Program sends facilitators and translators to the United States for two-year rotations to strengthen relationships between Japanese companies and U.S. communities while promoting better understanding of Japanese culture. 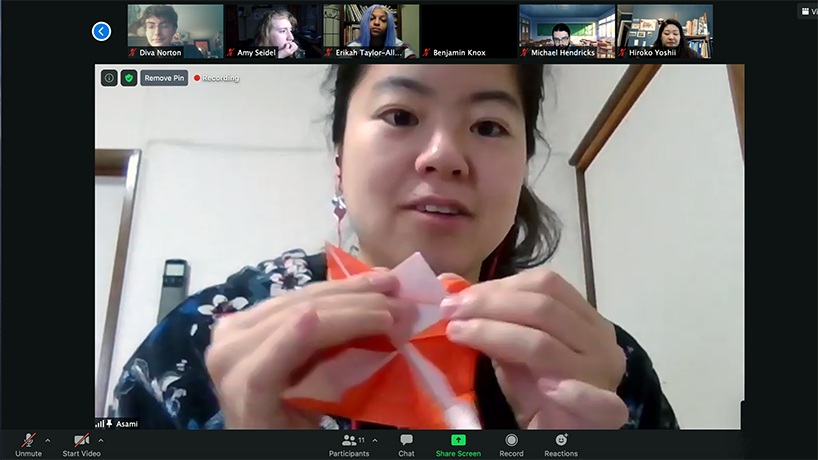 Asami Iba, a cultural exchange facilitator for the Grassroots Exchange Network-Japan Program, walked a dozen University of Missouri–St. Louis students and faculty through the creation of four origami shapes during a virtual class held on Nov. 12.

Ueda and Motes planned the event to celebrate Bunka no hi, or Culture Day. It’s a Japanese holiday held on Nov. 3 to promote culture, the arts and education. Previously, Nov. 3 had been celebrated as Emperor Meiji’s birthday until his death in 1912.

Iba began her presentation by discussing the history of origami. Though historically it has never been linked with Japanese religions, she noted it does have its roots in Buddhism or Shinto. Families might have used the folded paper forms as gifts or in ceremonies, which she noticed growing up in her own family, who practiced Shinto.

“This is the very short story of origami,” she said.

Afterward, Iba walked the participants through four origami forms: the samurai helmet, a flower, a heart and a balloon.

“I was thinking maybe we should make a crane,” Iba said. “But I think you’ve already made it, and also the crane story is kind of a sad story.”

Iba talked through each fold and crease slowly, and the participants held their papers up to their cameras for her to inspect after each step. Though it might seem like a difficult proposition to talk through the sometime-complicated folds, Iba did so with ease and the participants all managed deftly.

Some patterns in the technique emerged over the course of the hour. The origami shapes relied on center lines, square and triangle shapes and symmetrical folds.

The final shape, the balloon, was a little box that the participants inflated by blowing into the shape, just like its rubber equivalent.

“Thank you, everyone,” Iba said, closing as her students posed with their origami shapes held to their computer cameras. “I hope you can make every of these things by yourself next time.”