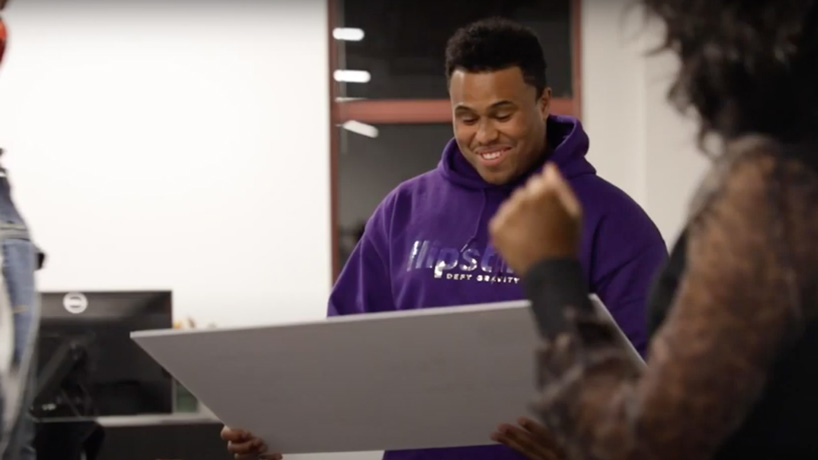 Akeem Shannon, the CEO and founder of Flipstik, was one of six early stage entrepreneurs showing off the growth of their business during the first UMSL Diversity, Equity and Inclusion Accelerator Demo Day held last Thursday. (Screenshot)

For Akeem Shannon, becoming successful has always been about making connections. That’s how his Flipstik phone accessory found its way in the hands of P. Diddy, on stage with Snoop Dogg and featured on the television show “Shark Tank.”

“I wrote a rap and I rapped my pitch to P. Diddy and ended up with thousands of dollars worth of sales, an invitation to L.A. to meet executives at AT&T,” said Shannon, who grew up in Normandy, Missouri. “From there we even met Snoop Dogg, with what he likes to call ‘the sticky phone.’ We took this, and we actually made connections with someone who ended up being a casting director for ‘Shark Tank.’”

On March 25, Shannon joined five other St. Louis business startup founders praising the impact of the connections he’s made from being chosen to participate in the University of Missouri–St. Louis’ Diversity, Equity and Inclusion Accelerator.

“Having something like this, really the first of its kind in St. Louis, is revolutionary,” Shannon said during the DEI Accelerator Demo Day event. “Being part of this inaugural class for UMSL has honestly been great. I don’t think I knew how valuable the relationships were going to be that I was going to be able to tap into.”

Sponsored by Ameren, Edward Jones and Express Scripts, the DEI Accelerator works to promote growth for startups with diverse ownership. Each startup founder is awarded $50,000 and an additional $200,000 of in-kind resources including workshops, hands-on sessions, roundtables and mentoring. Demo Day gave the founders a chance to showcase what they have gained in the eight weeks since the program began in January.

“We’re learning how to be an entrepreneur, we’re learning how to build our businesses, we’re making connections, we’re meeting mentors,” said Darren Young, co-founder of the Fattened Caf restaurant. “And then we have people that are committed to picking us up when we fall and when we don’t know where to go next.”

Dan Lauer, the founding executive director of UMSL Accelerate, said that the program has been working since its inception in 2011 to find ways to be supportive of business startups.

“We brought in lawyers, accountants, insurance folks to really shore up their documents and their foundation,” he said. “And then also, business development, a lot of introductions made for traction so we got founders in front of decision makers to move them farther.”

The UMSL Diversity, Equity and Inclusion Accelerator participants are:

Michelle Robinson, founder of DEMIBlue Natural Nails & Creative, which provides vegan-friendly nail polish. DEMIblue has eliminated ten commonly used toxins and all animal-derived ingredients through production. Robinson was motivated by her mother’s cancer diagnosis and the desire to provide toxic-free access to beauty products for people like her mother. DEMIblue can be found in six cities across the United States and on the Walmart marketplace. The company’s motto is: DEMIblue provides a healthier you at your fingertips.

Akeem Shannon, founder of Flipstik, a customizable kickstand that attaches to your phone cover and allows you to stick your phone to nearly any flat surface. Utilizing a trademarked “synthetic setae” adhesive, the washable device enables hands-free selfies, zoom conferences, hands-free Youtube or Netflix viewing on planes and trains, and hands-free GPS use while in any vehicle. Flipstik has garnered several partnerships in retail and has sold over 35,000 units.

Tyrean Lewis, founder of Heru Urban Farming, which provides communities with healthy food options and medicinal herbs to those who need it the most. In just two years, Heru Urban Farming has grown from a small plot to farms spanning over three football fields. Providing over 15 types of crops and 12-week subscription programs, Heru Urban Farming has emerged as a healthy solution to those in need. The company’s motto is: Transforming St. Louis’ food desert into a food oasis.

George Holmes and Keiry “Katie” Moreno Bonnett, co-founders of Hire Henry, a heavy duty robotic lawnmower. The mission of Hire Henry is to disrupt the lawn care industry by allowing entrepreneurs to start and scale their own lawn care business through Hire Henry’s patented technology. Through a fully functional prototype, the Hire Henry team is conducting beta tests with a target launch in spring 2021. The company’s motto is: At the intersection of lawn care service and technology.

Darren Young and Charlene Lopez-Young, co-founders of The Fattened Caf, a smoked meats and Filipino BBQ pop-up restaurant that was recognized by Feast Magazine as one of 2021’s Rising Stars. In partnership with Schnucks grocery stores, the restaurant has sold thousands of their famous Filipino Breakfast Sausages, called Longganisa. For just over a year now, The Fattened Caf has had residency at Earthbound Beer on Cherokee Street where they sell out of Filipino BBQ about 3 times a month, selling over 300 plates in just two hours.

To see highlights from last last week’s Demo Day, click on the video below: