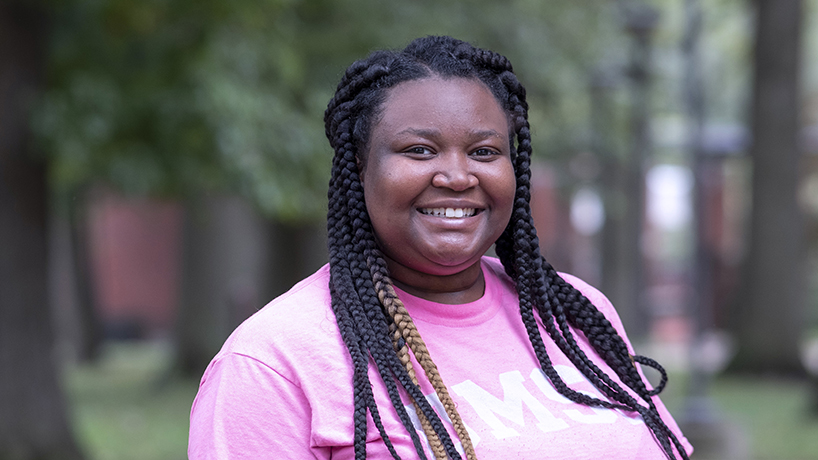 College of Nursing student Muriel Miller has wanted to be in medicine since an early experience helping her aunt through childbirth but experienced doubts if she could accomplish college as a first-generation student doing everything and paying for everything herself. She’s on track to graduate this December with three job offers and has inspired her whole family. (Photo by August Jennewein)

Despite still having a few more months of classes to wrap up before earning a bachelor of nursing degree, Muriel Miller has already started a family tradition. The eldest of seven children and a first-generation college student, she’s leading the charge for her family’s college education, inspiring her siblings to consider school and nursing careers.

“It’s felt very good to help my little sister fill out applications, figure out FAFSA,” the University of Missouri–St. Louis student said. “That was a really good feeling to know that I inspired her, and my other brothers and sisters all want to go to college, which was something they weren’t even talking about before.”

Things have gone so well that even Miller’s mother, who holds an associate degree in business administration, has begun considering more school.

Getting close to the finish line and inspiring her family throughout that process has been immensely affirming for Miller. Though she’s had her share of doubts and hurdles throughout her undergraduate experience, finding a love for nursing and for women’s health has carried her throughout.

An early experience with women’s health first got her interested in a medical career. At 14, Miller assisted her aunt through the early stages of labor, helping her in and out of the tub, talking to her through the day.

“Once she got to the hospital, I loved how everybody was surrounding her and how much of an empowerment it was for a woman,” Miller said. “Afterward, doing research I found out that also a lot of Black women die from giving birth, more than anybody else. It became a big thing of, ‘I want to be an OB/GYN’ because I want to empower women but also because, ‘I want Black women to have somebody to trust.’”

But when it came time to enroll, Miller found herself filled with doubts that she could really pursue medical school.

“It didn’t feel achievable for somebody like me, a poor Black girl,” Miller said. “I’d just never seen it done.”

She decided to try nursing school instead. Being close to her family in Normandy, the strength of the College of Nursing program and receiving scholarship money made UMSL the perfect choice for Miller.

“I came on tour, and it was a great experience,” she said. “It seemed like somewhere I could get along with people. I could make friends. I could stay on campus. But I could be at home if I needed to.”

Throughout school, she’s done both, living on campus her freshman year, moving home for sophomore year and then returning to the area to live in the Mansion Hill Apartments her third and fourth years. Though there’s benefits to both, Miller notes that living on campus and having a meal plan simplifies things such as getting to class.

That’s been key for her because Miller not only has taken on the rigors of the nursing program but also has been working to pay for her education. She feels fortunate to have benefitted from scholarships and financial aid such as grants from UMSL and Missouri, FAFSA and the North County Matching Scholarship, but that hasn’t covered everything.

She began working during her second semester, getting jobs the UMSL Office of Residential Life and Housing and becoming a nursing mentor as well as a tutor. Her sophomore year, Miller worked at Dave & Buster’s and then became a student nurse tech on the cardiothoracic stepdown unit at Barnes-Jewish Hospital.

Yet despite the difficulty and despite the fact that her original dream was to be a doctor, not a nurse, Miller has found a home in the College of Nursing.

“I fell in love with it,” Miller said. “You don’t have the same kind of interaction with patients if you’re a doctor. I’ve seen doctors come in and explain things to patients, and then the nurse is the one that has to explain it further or to answer questions. Aside from your family, the nurse is the one who is your support system. I’m like, ‘This is actually what I wanted. I wanted to be the right-hand person to somebody in that vulnerable moment.’”

Clinicals and her job at Barnes drove that feeling as did finding some unexpected areas of interest. Though Miller still loves women’s health, she surprised herself by discovering she enjoyed other areas of nursing as well.

“If they’re adults or if they’re kids, if it’s heart patients, if it’s trauma patients, it doesn’t matter to me,” she said. “I love being there for anybody.”

With three job offers on the table, Miller’s next steps are still up in the air. But having gone through college and nursing school, she’s open to the possibilities and confident that whatever she wants to do, she can do it – whether that’s work or more school to become a nurse practitioner or midwife.

Or even medical school.

“I’m just like, ‘I can do this if I want to,’” Miller said. “I don’t know what the future holds, but I’m definitely looking into. I know one day I definitely want to further my education. Right now, I feel like everything is achievable. I feel very proud of myself.”