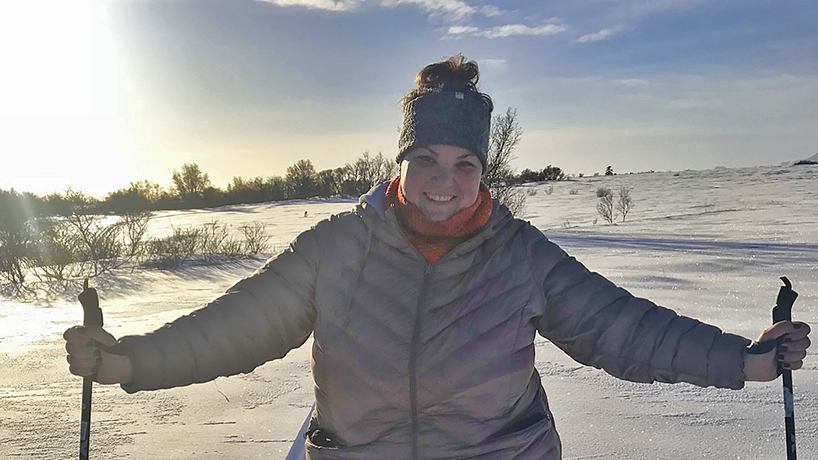 Since moving to Alaska in 2015, Leigh Bolin, a University of Missouri–St. Louis psychology graduate, has provided vital child advocacy and mental health services to remote areas of the state. Recently, she reconnected with UMSL, working with the university on a $500,000 Department of Justice grant to develop victim advocates in Alaska Native communities. (Photo courtesy of Leigh Bolin)

When Leigh Bolin’s husband said he wanted to move from St. Louis to Alaska, she wasn’t shy about her feelings.

“I did not want to move to Alaska,” she said with a laugh.

In the spirit of compromise, Bolin, a University of Missouri–St. Louis psychology graduate, struck a deal – albeit one she thought would fail.

The couple would move if her husband, J.T., could find an employer who would be willing to hire both of them as mental health clinicians, provide paid relocation and offer student loan repayment by the end of their lease in January 2015.

He did what seemed like the impossible and found positions with the Bristol Bay Area Health Corporation that satisfied each condition. That’s how Bolin found herself in Dillingham – a remote town on the coast of western Alaska that is cut off from the statewide road system.

At Bristol Bay, Bolin traveled by plane, providing vital child advocacy services and mental health services to remote communities in the sparsely populated region. After five years, Bolin relocated to Fairbanks to run a nonprofit and oversee its behavioral health program. There she reconnected with UMSL, working with the university on a $500,000 Department of Justice grant to develop victim advocates in Alaska Native communities.

It’s been an unexpected journey, but she’s enjoyed the twists and turns.

“Looking back, I wouldn’t change any of it,” Bolin said. “We had a shorter-term plan of three years, then head back to St. Louis, but we fell in love with it. We fell in love with the work and the community, the village travel, working with Alaska Native people.”

Before the cross-country move, another experience changed Bolin’s life – an internship while studying at UMSL. Bolin was majoring in psychology but was uncertain about her future career path. Then she took a psychology class that placed her in an internship with the Women’s Safe House, a local shelter and social services agency.

Bolin added a social work minor and began pursuing opportunities to gain experience in the field. After interning with the Women’s Safe House for two semesters, the agency hired her as an evening and weekend monitor and later promoted her to development assistant.

She also worked as an undergraduate research assistant for a project at the Center for Trauma Recovery. Margaret Sherraden, former professor of social work, provided guidance along the way and helped Bolin apply to social work master’s programs.

After graduating from UMSL, Bolin started working full-time for the Women’s Safe House as a case worker and enrolled in an MSW program at Saint Louis University. While working toward her graduate degree and clinical license before the big move, she also held positions as a community support worker at Places for People, Inc. and then as a program director at Peter & Paul Community Services.

The transition from working in a city to the remote Bristol Bay region of Alaska was drastic in some ways but less so in others. The biggest change was logistics. Bolin went from traveling the St. Louis region by car to flying over mountains in a bush plane to reach remote communities.

However, the core of the work remained the same.

“It was very different, but a lot of the same skills, getting to know people, learning what’s important to them and not coming in like I know everything but learning from them,” Bolin said. “People are super willing to teach you if you’re just willing to learn.”

As a clinician and manager of a child advocacy center, Bolin serviced an area the size of Ohio with about 10,000 people scattered throughout it in small towns and villages. Her work included community outreach and engagement to drive awareness about the resources available to children who experience traumatic events. She also counseled 30 therapy clients.

Remote communities can often be intimidating to outsiders, but Bolin found the people in Bristol Bay incredibly welcoming and kind. She fondly recalled a client taking her wild berry picking – a cherished pastime in Alaska, especially among Alaska Native people – for the first time.

For her, the key to making those connections is being humble and open minded.

“I have things that I can share, knowledge that I’m able to help somebody through,” she said. “They have it too, and it goes both ways. That’s really how you’re going to get to know people here. You can’t come in and know everything.”

In March 2020, Bolin embarked on another move, though it was bit shorter than the first.

She headed to Fairbanks, located in the center of the state, to serve as a clinical supervisor at the Resource Center for Parents & Children, and in less than year, she was running the nonprofit as executive director.

Bolin has worked to build a more comprehensive behavioral health program, adding a full-time clinical position with plans to add two more clinicians in the near future. The nonprofit also houses a child advocacy center, which serves the vast interior region of the state.

The center provides resources – forensic interviewers and victim advocates – for children who’ve been the victims of abuse, which might include incidences of neglect or physical, emotional or sexual abuse.

Through the child advocacy center and her role as president of the board for the Alaska Children’s Alliance, Bolin recently reconnected with UMSL.

In May, the DOJ awarded the Children’s Advocacy Services of Greater St. Louis, the UMSL Child Advocacy Studies program and the University of Alaska-Fairbanks Department of Social Work a $500,000 grant to develop victim advocates in Alaska Native communities.

A cohort of nine indigenous UAF students are receiving virtual instruction in three core courses of UMSL’s Child Advocacy Studies certificate. They also participate in an associated mentoring program and will complete an internship. When Bolin heard about it from a peer at UAF, she was surprised at first but eager to help in any way possible.

“I got this email from the director of the social work program at University of Alaska-Fairbanks that’s like, ‘Hey, we have this partnership with this school in Missouri,’” Bolin said. “I’m like, ‘Wait, I went to that school!’”

One of the students in the cohort is interning at the Resource Center for Parents & Children child advocacy center, and Bolin has invited others to tour the facility. In August, Dana Klar, assistant teaching professor of child advocacy studies; Jerry Dunn, executive director of CASGSL; and Dorothy Haskell, project director for the Child Advocacy Studies program, came to Fairbanks for a site visit.

The cohort students were able to meet the UMSL team in person and meet other professionals who work with the child advocacy center.

“It was really good for the students to see,” Bolin said. “They talk a lot about child advocacy centers, and some of them have never been to one before. It was cool for them to actually see one and meet with the multidisciplinary team partners and get to ask questions.”

Dunn was impressed with Bolin’s dedication to provide a meaningful experience for the students coming in from across the state.

“What was striking to me about Leigh was how welcoming she made the entire environment,” Dunn said. “She opened up the entire center, brought people in and made the students feel comfortable, made us as faculty feel comfortable. It really left me with the feeling that she’s creating an environment, an incubator for them to be able to grow even more.”

Five years ago, Bolin could hardly fathom living in Alaska, but now it’s hard to imagine leaving the community she’s found and continues to serve.

“I love the community,” she said. “It’s a big state, but it’s small. There’s a lot of community here and just really genuinely nice people. There’s this culture of dropping in with people you’ve met across the state. I’ve made lifelong friends here for sure.”