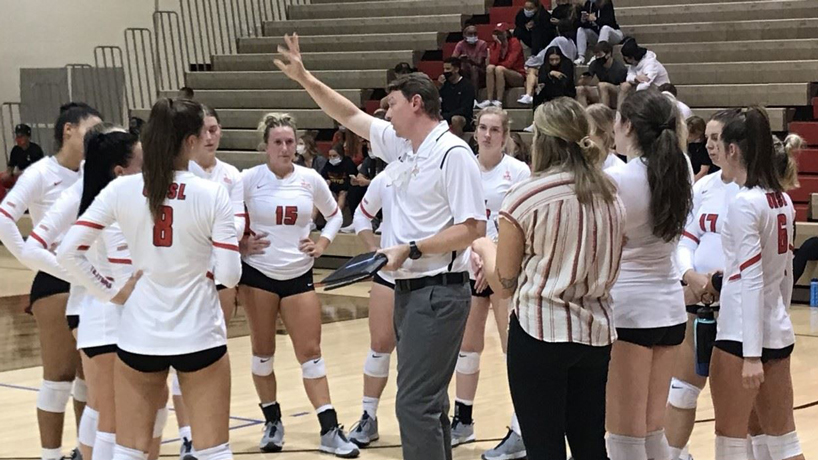 Ryan Young coached the UMSL volleyball team through a five-set victory over Lindenwood on Friday. The Tritons improved to 17-6, 10-2 in Great Lakes Valley Conference play.

Volleyball
UMSL dropped two of the first the first three sets Friday night against Lindenwood but rallied for a 26-24, 22-25, 21-25, 25-21, 15-10 victory at the Mark Twain Athletic Center. Outside hitter Charlotte Richards led the team with 15 kills on a night when she became the first recipient of the $2,500 Curt and Diane Coonrod Annual Athletic Scholarship. Setter Kaileen Herman had 42 assists, and libero Megan Woll had a team-best 36 digs for the Tritons, who improved to 17-6, including 10-2 against Great Lakes Valley Conference opponents to pace the Central Division. UMSL will play five of its final six matches of the regular season at home, starting with Tuesday’s match against Quincy and home matches against Indianapolis and Lewis on Friday and Saturday, respectively.

Men’s Soccer
The Tritons secured the No. 7 seed in this week’s GLVC Championship despite a 3-0 loss to McKendree Sunday on Senior Day at Don Dallas Field. UMSL was outshot 12-8, including 10-3 in shots on goal. The loss came two days after the Tritons blitzed Southern Indiana in a 4-0 victory Friday night to run their season-best winning streak to three matches. Arman Kovac, Nick Schreiber, Leo Sowa and Garrett Bass all scored for UMSL in the first 49 minutes of the match. Kovac now has a team-high eight goals this season. The Tritons (8-7-1, 7-6-1 GLVC) will take on No. 2 seed Illinois Springfield in a quarterfinal match at noon Sunday in Springfield, Illinois.

Women’s Soccer
UMSL dropped its regular-season finale 3-1 at home against McKendree but will get one more shot at the Bearcats when the two teams face off in the first round of the GLVC Championship. The Tritons booked a spot in the conference tournament for the first time under second-year Coach Maddi Moon with help from an Illinois Springfield loss to Drury that gave UMSL the No. 8 seed. The Tritons had kept themselves in the hunt for a postseason berth with a 2-1 victory over Southern Indiana on Friday. Jalyn Richardson delivered the game-winner in the 89th minute after earlier assisting on Ayana Weissenfluh‘s goal. The Tritons will meet top-seeded McKendree at noon Sunday in Lebanon, Illinois.

Men’s Golf
A strong performance on the second day of the Tulsa Cup allowed UMSL to climb five places to finish seventh in a 21-team field at the Club at Indian Springs in Broken Arrow, Oklahoma. Ian McCrary fired a final-round 69, matched by Nick Hedberg, as the Tritons posted a combined scored of 288 in the third round and finished the 54-hole tournament with a total of 7-over-par 871. McCrary finished tied for 19th individually to lead the team. Cyril Henault was tied for 28th with Hedberg and Carson Postal both tied for 43rd and Joel Sylven tied for 48th. UMSL concluded its fall schedule.