Ask an Expert: Samantha Simon explores the challenges to changing police culture in the United States 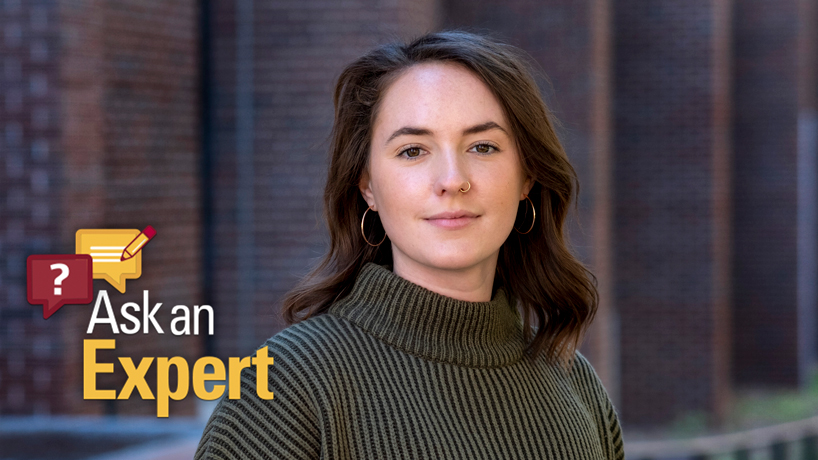 Assistant Professor Samantha Simon observed police training at four large municipal academies over the course of one year and published some of what she observed in an article in the September issue of the journal “Social Problems.” (Photo by August Jennewein)

The debate about the role of police has grown ever louder in the United States over the past seven years.

It pits those who see officers occupying a vital role protecting and serving their communities against those who view them as overly aggressive, militaristic and posing a threat, particularly to members of minority communities.

The high-profile killings of Black men and women such as Michael Brown, Freddie Gray, Breonna Taylor and George Floyd at the hands of officers have added weight to the latter position and prompted calls for reform, including hiring a more diverse group of officers and providing better training to de-escalate situations before they explode into violence.

But newly published research from Samantha Simon, an assistant professor in the Department of Criminology and Criminal Justice at the University of Missouri–St. Louis, shows some of the challenges to making the changes to the institution of policing.

“Training for War: Academy Socialization and Warrior Policing,” published in the September issue of the journal “Social Problems,” is based on a year of ethnographic field work Simon did at four large municipal police academies and 40 interviews she conducted with officers and cadets. In the paper, she argues that “police training is an organized effort to condition officers to conceptualize their relationship with the public as a war.”

In the latest installment of its Ask an Expert series, UMSL Daily spoke to Simon about her research and observations.

What made you interested in studying police and police training?

The research really started because I was involved in another project about civilian gun ownership with a professor in graduate school. We were doing a lot of field work at what were essentially training schools for civilians on how to shoot guns in Texas. I started thinking, if this is what civilian training looked like, what did police training look like? Did it look any different at all? This was also not very long after the Ferguson uprisings had happened after Michael Brown had been shot. I thought it was an interesting and also important area of study to see how police officers were being trained to use force. I was also pretty interested to see how some of reform efforts were playing out at departments – diversity initiatives in hiring and also de-escalation training – to see what they looked like and if I thought that they were changing anything or were going to be effective in potentially reducing police use of force and racist use of force.

How difficult was it to get access to the police academies to do the research?

There were a lot of stops and goes on that, which most ethnographers will say is true. Access is an ongoing, negotiated process. I was at four different police academies, and I don’t name the academies or the state. But they’re all in the same state, and all four of them are large municipal departments. I spent a year participating in academy training and watching it. It kind of depended on the department how much access I had at each academy. My original plan was to go through one academy from start to finish, every day with the cadets, and I got a meeting with the sergeant at what I call Rollingwood Police Department and asked him if I could do that. And he was like, ‘No, absolutely not. That’s a city liability nightmare. It’s just not going to happen.’ He was like, ‘You could apply for employment,’ but that would have taken another year and a half. Then I met with the sergeant at that department in the hiring unit, and he was fine with me tagging along to recruiting events with the recruiting officers and sitting in on interviews. From there, I found that if another officer would vouch for you, then other officers would usually let you in. So, then I got in at the academy at Rollingwood. Once one police department said ‘Yes,’ the other police departments in the state were like, ‘Oh, they’re letting you, then that’s fine.’ But again, sometimes there would be starts and then stops. The longer you’re in a place, the more access they’ll generally give you.

What were the biggest surprises from what you observed in police academies?

I guess I was a little bit surprised at just how effective the institution was at sustaining itself. I went into the field thinking that diversity mattered a lot in any kind of institutional context, including in a policing context. But it sort of seemed like this institution – like most are – was pretty good at reproducing itself regardless of what the bodies are filling the roles. I think Black women and feminists have been saying this much longer than I have been.

The hiring process is structured in a way that even if women are entering these roles, even if Black men are entering these roles, they pretty much ensure that a certain kind of person with a certain kind of worldview – understandings about crime and punishment and innocence and threat and morality – are allowed in in the first place. There’s a pretty robust system – even if it’s sometimes informal ­– that pretty much guarantees whoever is making it to graduation is going to fit in with the institution pretty well. So, this idea that if we just hire more Black officers or more women officers, that this will somehow change the institution – I’m now fairly pessimistic about that.

About 5% of the folks who apply are offered employment, so these are like Ivy League acceptance rates, basically. You do have to test. You have to pass the physical test, there’s a written test, there’s a psychological exam and there’s a background investigation. The whole process can take a year for some folks.

Were the academies taking steps to increase diversity?

Their initiatives kind of differ depending on if they were talking about race or gender. Typically, they would say that their goal was to mirror the demographics of their city in terms of race. They never stated that as a goal for gender, which I found interesting. I don’t know if the difference was too large between what would have to happen for them to have 51% women because there are certainly fewer women applying than men. Typically, these departments had between like, 9-11% of their police force were women or sometimes less. I think one of them was like 7%, and their goal was to get to 12%. Nobody could tell me where these numbers came from. I didn’t particularly get the sense that there was any kind of privileging of women or racial minority applicants in the hiring process. That was just my sense of what was going on.

Generally, for racial diversity, they would try to go to HBCUs to recruit. They would try to go to Hispanic-serving institutions for recruiting events or go to hiring fairs that were happening at Black churches or Latinx churches, things like that. Also, they tried to recruit really heavily from the military. I saw that across departments. In particular, that seemed to be one pathway for them to get Black officers because the military is disproportionately minority. That was one method they were using.

How much training did cadets receive in de-escalation?

There was not yet state mandated de-escalation training at the time. There is now in many states, but not at that time. These were, again, large municipal departments, so they did have de-escalation training. They had opted to have it, and it was an eight-hour block of training. It was generally quite vague and disjointed. I actually agree with officers when they say that de-escalation as a concept is quite vague. I’m still not particularly sure what it means in terms of actionable items or specific instruction. In general, the way that de-escalation was presented as a concept in the training that I saw at two different departments was that you should be polite to folks when you approach them and be communicative about what’s going on with them. But always be wary of people. Make sure that you’re prepared for violence if you need to and never ever prioritize de-escalation over officer safety. Even in the de-escalation classes, they were still showing videos of officers being killed, and they were really still emphasizing danger and risk and threat as the primary concerns for officers.

What did officers think of the training?

De-escalation was and still is this thing that everybody’s talking about and demanding. The officers that I met said, “We’ve always been de-escalating.” Their understanding was that use of force was absolutely not a problem, and they would reference FBI statistics about how many interactions actually end up in use of force, which admittedly is a small portion or percentage. There are a lot of police contacts that happen every single day. They thought of de-escalation as a buzzword or renaming of tactics that they had already always been using and that it should, again, never be something that’s prioritized above officer safety.

Generally, officers in order to engage in force or escalate force, they need to articulate that they felt their life was at risk. If somebody’s hands are in their pocket, then that can be that can be enough, actually. They’re taught that in the academy – that if someone’s hands in their pocket and if they ask somebody to take their hands out of their pocket, and they don’t, now they have a lot of discretion on how much force they can then use. Because they could decide that they felt that you had a gun in your pocket. These sort of lessons are everywhere at the academy. There are posters on the walls that say, “Watch the hands. The hand you can’t see is the one that could kill you.” There was a hyper fixation on body movements. They’re supposed to intuit what level of risk is coming from these body movements.

How receptive do you think the academies were to calls for reform?

The only reason police reform starts to come into play is because of self-preservation. If enough people are angry. But that’s also why it generally ends up being cosmetic or aesthetic reforms. Some academies will change the outfits they’re wearing to look less militaristic, but nothing actually has changed about the substance of the academy, or they’ll add an eight-hour block of de-escalation to just hammer home the points that they’ve talked about for the rest of the 600 hours of state-mandated training, plus an additional 500 hours of municipal training.

Where does that leave the broader debate?

Everybody wants to feel safe, and I think that’s probably the underlying thing. There is a similar motivation for all these people. The people whom the police make feel safe want the police. Because it makes them feel safe, right? The people who are targets of police violence systematically for centuries, it’s the opposite, right? They want to get rid of the police because they want to feel safe. But underlying all of this is that people want to feel safe and supported in their communities, and figuring out how to do that for everyone is the task.