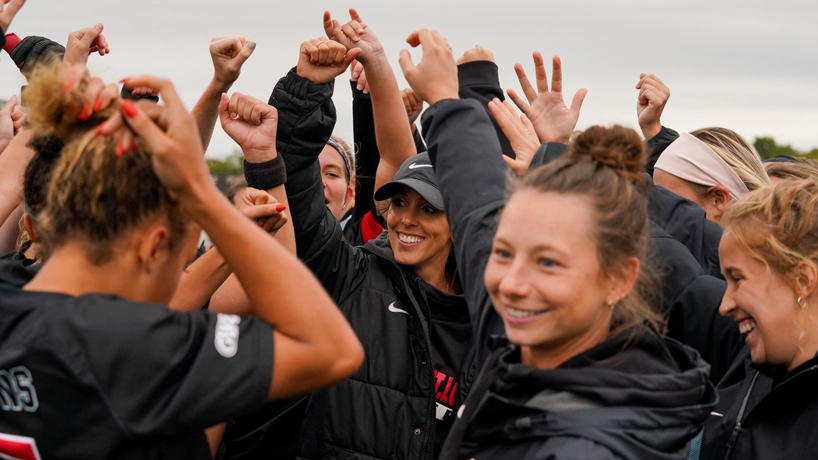 UMSL stunned four-time defending GLVC champion McKendree on penalty kicks to advance to the semifinals of the conference tournament. Candice Parziani delivered the clinching goal in the 5-4 shootout victory.

Women’s Soccer
UMSL stunned four-time defending Great Lakes Valley Conference champion and current No. 1 seed McKendree with a 5-4 win in penalty kicks Sunday in Lebanon, Illinois, to advance to the semifinals of the GLVC Women’s Soccer Conference Championship in Lebanon, Illinois. The two teams were tied 1-1 at the end of regulation and overtime. The Tritons jumped on the Bearcats quickly when Mia Milazzo scored off a pass from Ayana Weissenfluh 2:23 in the match, which was played seven days after McKendree beat UMSL 3-1 on Don Dallas Field. McKendree pulled even on a goal by Emma Knoebel three minutes into the second half, but goalkeeper Paige Schwartz and the Tritons defense kept the Bearcats from scoring again. Weissenfluh, Abby Reaves, Milazzo, Mia Ware and Candice Parziani all converted their penalty kicks, and McKendree’s second attempt sailed high. UMSL (8-7-3) will take on fifth-seeded Southern Indiana Friday in the GLVC Championship semifinals, being played at Drury University in Springfield, Missouri.

Men’s Soccer
The Tritons season came to an end with a 2-0 loss to Illinois Springfield Sunday in the quarterfinals of the GLVC Men’s Soccer Championship in Springfield, Illinois. Lars Brinkman scored twice in the second half for UIS. UMSL appeared to tie the match at 1 late in the second half as a free kick by Bradley Fritsche deflected into the goal, but it was waved off because of a foul. Illinois Springfield finished with a 13-8 shots advantage, including 7-2 in shots on goal. The Tritons finished the season 8-8-1.

Volleyball
UMSL knocked off Quincy and Indianapolis last week before losing in four sets to Lewis at Mark Twain Athletic Center. The Tritons swept Quincy 25-22, 25-18, 25-19 on Tuesday night with outside hitter Charlotte Richards recording a team-high 18 kills. Richards and Paige Yoder each had 20 kills on Friday night as UMSL beat Indianapolis 25-17, 25-14, 24-26, 28-26. The Tritons took the opening set Saturday against Lewis before dropping three straight. Megan Woll had 27 digs in the loss. UMSL (19-7, 12-3 GLVC) will wrap up its regular-season schedule this week with a road match Tuesday at Lindenwood and home matches against Maryville and Truman State on Friday and Saturday, respectively.

Men’s and Women’s Cross Country
Both UMSL cross country teams wrapped up their seasons in the Midwest Regional on Saturday. The men’s team placed 28th out of 30 teams. Sophomore Jacob Warner was UMSL’s top finisher, placing 47th in the 206-runner field with a time of 32 minutes, 1:06 seconds in the 10-kilometer race. Sam Savastino was the next best UMSL finisher in 130th place. The Tritons didn’t have enough runners to field a full team in the women’s 8-kilometer race, but Lily Wagemann finished 143rd out of 216 runners to lead UMSL. She posted a time of 23:55.5.

Men’s and Women’s Swimming
The men’s team won its dual meet with Truman State 152-58, while the women fell 127-84 on Saturday at the Mark Twain Athletic Center. Conley Savage shined for the men’s team, winning the 400-yard individual medley and the 100-yard butterfly. He also swam the third leg of the winning 400-yard medley relay. Kevin Stahl won both the 500-yard and 1,000-yard freestyle races. On the women’s side, Rebecca Bechtel won both the 500-yard and 1,000-yards freestyle races, and Zara Konstapel won the 100-yard breaststroke. Both teams will race against Truman State again on Nov. 19-20 in Kirksville, Missouri.

Women’s Basketball
The Tritons geared up for the Friday’s regular-season opener at Grand Valley State in Allendale, Michigan, by testing themselves against a pair of NCAA Division I opponents last week. UMSL lost 64-53 on Wednesday at Illinois State and fell to Southern Illinois University Edwardsville 74-66 on Saturday. Mallory Ronshausen led the Tritons with 15 points off the bench against Illinois State, and Alex LaPorta had 14 points and nine rebounds to pace the team against SIUE. UMSL was picked to finish second behind Truman State in the GLVC Central Division in a preseason poll of the league’s coaches.