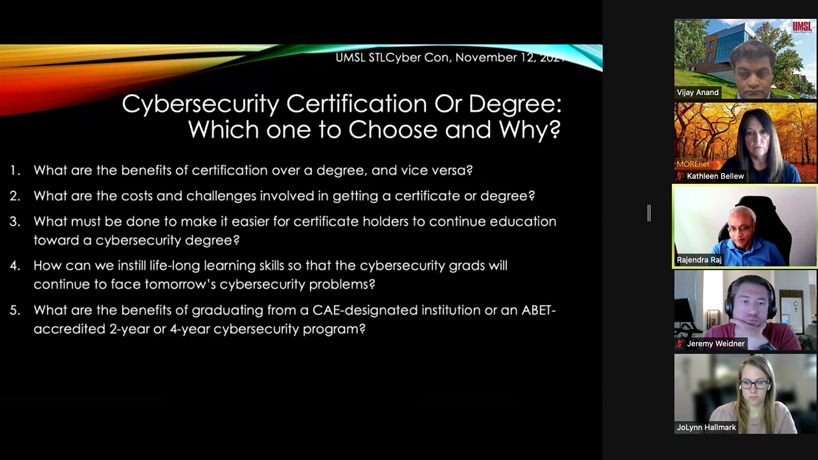 This year’s STL CyberCon culminated with a panel discussion titled “Cybersecurity Certification Or Degree: Which one to Choose and Why?” (Screenshot)

The seventh annual STL CyberCon provided a forum for people to hear and learn from leading researchers and practitioners working in the realm of cybersecurity in Missouri and far beyond.

The 4½-hour conference was organized and sponsored by the University of Missouri–St. Louis and attracted more than 160 registrants when it was held virtually last Friday.

Of particular note for the many students in attendance – including some high school classes logging in together – was a panel discussion on the relative benefits of pursuing a bachelor’s degree versus certificates in cybersecurity for those interested in breaking into the field.

Rajendra Raj, a professor in the Department of Computer Science at Rochester Institute of Technology, moderated the discussion between Vijay Anand, an associate professor of information systems and technology in UMSL’s College of Business Administration; Kathleen Bellew, a cybersecurity analyst at the Missouri Research and Education Network; JoLynn Hallmark, a senior incident responder at Verisign; and Jeremy Weidner, a senior cybersecurity analyst at Avertium.

Both degrees and certifications can be necessary for helping an applicant get consideration.

“One of the benefits of having one or the other is that they open up some doors, through HR, when you’re applying for a job to meet their requirements,” Weidner said.

As a hiring manager, Weidner said he tries to look deeper.

“All that I really care about is whether you have the needed skills and knowledge and the ability to apply it,” he said. “One of the best people I’ve ever hired didn’t have any formal training, but again, with a passion he had learned a lot on his own, tinkering and things like that.

“But it is beneficial because they are structured learning programs. Because the field of cybersecurity is so large, it helps give you a guided approach.”

Whether someone opts to pursue a degree or certifications, they can’t ever be content they’ve learned everything they need to know in a field that is changing as rapidly as cybersecurity.

“How can you instill that lifelong learning skill?” Bellew said. “If I find that I’m lacking in an area, then maybe is there is a certification out there I want to go for that’s going to be more in depth and teach me more about what I need to do to better serve the people that I serve.”

When considering a four-year degree program, Anand said it’s important to be sure that it’s not set in its ways.

“Look at your program and find out where whether your program has a mature process or not,” Anand said. “Is the program evolving or not with time because this is a field that is going to evolve very fast.”

As with any career, job seekers need to make connections to get ahead.

“After I got my internship out of school, every other job I’ve had since then is because of the people that I’ve met,” Hallmark said. “Obviously, you have to have the skills and the background, but make sure you’re doing things to meet people. These conferences are great. There’s the other side to it. There’s the technical side, and then there is the networking side.”

In addition to the panel discussion, STL CyberCon attendees had a chance to log into presentations from Jason Martin, the director of the Digital Capabilities and Security Center at the Defense Information Systems Agency; Alexander Braszko, Kansas City’s former chief information officer and IT program manager now working on issues of rural broadband; Connor McGarr, a Red Team Consultant at CrowdStrike; Prasad Calyam, a University of Missouri–Columbia professor researching blockchain-based cyber threat intelligence sharing and defense; and Marcus McCarty, a senior consultant for the University of Missouri System’s Broadband Initiative.

Abderrahmen Mtibaa, an assistant professor in UMSL’s Department of Computer Science in the College of Arts and Sciences, was one of the faculty members organizing the conference. He said he and his colleagues hope they can return to an in-person format, including a job fair and more networking opportunities, next year.

UMSL has more than 700 students enrolled in its computer science, computer technology, information systems and cybersecurity programs. The National Security Agency and Department of Homeland Security have designated UMSL a National Center of Academic Excellence in Cyber Defense Education.