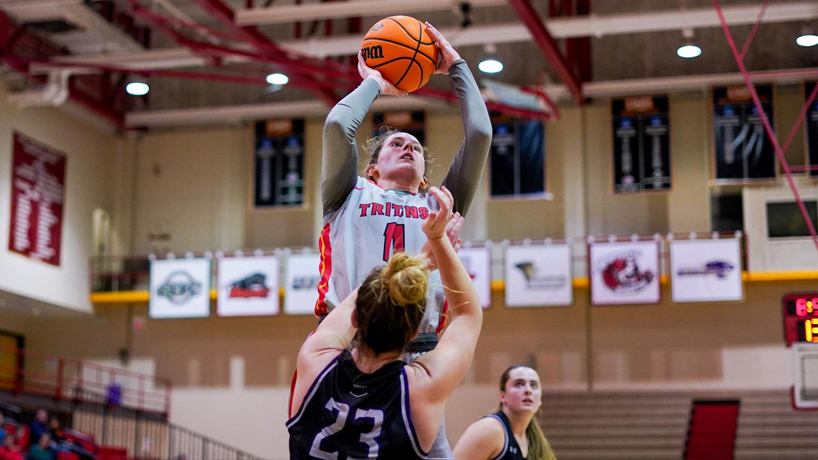 Women’s Basketball
Senior forward Alex LaPorta and senior guard Danielle Berry each scored 18 points while leading UMSL to a 65-55 victory over Trevecca Nazarene in their only game of the week on Wednesday at the Mark Twain Athletic Center. Faye Meissner and Kiara Stewart added 10 points a piece as the Tritons won their third in a row since a season-opening loss at Grand Valley State. UMSL limited Trivecca Nazarene to 41.9% shooting, including 3 for 11 in the final quarter to preserve the lead. The Tritons open Great Lakes Valley Conference play with three straight road games this week – Monday at Quincy, Thursday at Truman State and Saturday at Lindenwood.

Men’s Basketball
The Tritons went 2-0 in last week’s Maryville Thanksgiving Classic, holding off a second-half charge against Lincoln in an 80-72 victory on Tuesday before blitzing East-West 85-41 on Wednesday. Yaakema Rose Jr. scored a game-high 17 points and added seven rebounds and six steals against the Blue Tigers. Marty Jackson added 12 points and Shane Wissink 10 in a game that saw UMSL start quickly and build a 39-24 halftime advantage. The Tritons weren’t as crisp against East-West but still 28-16 at the break and poured it on in the second half. Jose Grubbs led five players in double figures with 17 points. The other four were all reserves as Coach Bob Sundvold took advantage of the opportunity to build the experience of his bench. UMSL will open GLVC play with road against Truman State on Thursday and Lindenwood on Saturday.

Volleyball
UMSL has spent the past week preparing for Thursday night’s NCAA Midwest Regional first-round match against Lewis, the same team that edged the Tritons in five sets in the GLVC Championship final on Nov. 21. UMSL (24-8) received the No. 5 seed and will take on the fourth-seeded Flyers at 7:30 p.m. Thursday in Big Rapids, Michigan. The winner advances to play either top-seed and host Ferris State or eighth-seeded Rockhurst at 7:30 p.m. on Friday.