From businesswoman to theologian to nurse: The many chapters of BSN student CJ Nash’s life 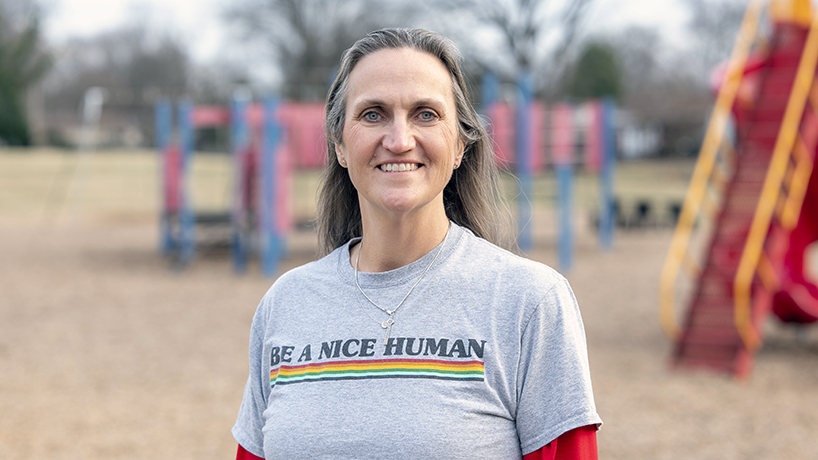 UMSL student CJ Nash has been a business woman, a mother, a theological student interested in Christian counseling, a military spouse, a nurse and now a College of Nursing RN to BSN student. In August, she and her husband, U.S. Navy Lt. Allen Nash, welcomed Zamzama “ZZ” Safi, a young translator that Lt. Nash met during a tour of Afghanistan, into their home. (Photo by August Jennewein)

University of Missouri–St. Louis student CJ Nash has worn a lot of hats throughout her life. She’s been a business woman, a mother, a theological student interested in Christian counseling, a military spouse, a nurse and College of Nursing RN to BSN student.

But no matter what Nash has been doing, certain aspects of her personality have come through.

“I’ve always been a nurturer,” she said.

Nash’s trademark trait has never been plainer than during a conversation that took place with her husband, U.S. Navy Lt. Allen Nash, last February. The two had been discussing the possibility of hosting a foreign exchange student, when they had another idea.

“One day, he said, ‘What if, instead of doing the foreign exchange student, we bring ZZ over?’” she recalled.

ZZ was Zamzama “ZZ” Safi, an Afghan teenager Lt. Nash had met during a tour in the Central Asian country. She’d been captured by the Taliban earlier in life and, after she escaped, went on to serve as a translator for American forces. By February, she was looking for a way out with U.S. preparing for a withdrawal last summer.

Nash’s answer to her husband’s question would not only go on to define her efforts for the following seven months and beyond but also reflect how her nurturing nature has carried her throughout the many chapters of her life.

Chapter 1: The path to the right career

Born in St. Louis, Nash moved away for school, returning to raise her children near family. At the time, she was working in sales and marketing for AT&T, but the business world wasn’t a good fit.

After a decade unhappy with her work situation, she left.

“It was a fairly aggressive environment,” she said. “I didn’t like it, so I left and I found something new to do.”

Nash enrolled at Saint Louis University, earning her degree in theological studies in 2006. She intended to continue her education with a master’s degree and go into Christian counseling and family counseling.

But then, as her husband was set to deploy, Nash changed course. She wanted a profession with more career options and flexibility than counseling.

“I wanted to be involved in some aspect of healing,” Nash said. “At first, I was going to school to help people heal, mentally and psychologically, through psychology and counseling. I’ve always been somebody who likes to help people figure things out and fix themselves and get well and get better. Nursing seemed like a natural fit.”

Chapter 2: Falling in love with nursing

Nash enrolled at St. Charles Community College and started working toward a new degree. At first, the going was rough.

“It was really hard, and I wasn’t sure that I was cut out for it,” she said. “There was so much memorizing, and it was overwhelming. I was not sure that I had made the right decision. But pride got in the way. I wasn’t about to tell my husband, ‘Um, no, maybe this isn’t for me,’ because we had already started to pay for it.”

Over time, Nash acclimated to the work and began enjoying it, especially as she started clinicals and developing bonds with her patients. She also soon realized that nursing wouldn’t be as different from the life she’d pictured when studying theology than she’d initially imagined.

Through her interactions with her patients, Nash had a chance to help and care for people, just as she would have as a faith-based counselor.

“I found that in my first early clinicals, when all I’m really allowed to do is change linens and give bed baths, that I could minister that way,” she said. “I could provide care for people. I could heal. I could have conversations with them. I felt like I was given a new opportunity to turn what I thought my ministry was going to look like into something even better.”

Nash became a labor and delivery nurse following her graduation from community college. Though she loved the joy of a successful delivery, the sadness she felt when things didn’t go smoothly wore on her.

Then, as her children got older and her husband deployed again, Nash knew she needed a position with hours that would allow her to be home in the evening.

She began taking temporary positions as a school nurse, which led to a full-time job in 2016 in the Special School District of St. Louis County.

“I love it,” Nash said. “It’s a different kind of nursing. I’m taking care of relatively healthy children. I work with kids with special needs, so there is a fair bit of uncertainty in that, but I wouldn’t trade it for the world. I absolutely love it.”

Working for the school district, Nash began to think about the collective health of the student body, rather than focusing solely on individuals. That upper-level thinking led her back to school to earn her BSN.

Drawn to the UMSL College of Nursing’s in-person classes, Nash got ready to start the program only to have the coronavirus pandemic necessitate the move to online learning. She might have never started, but then-Student Success and Retention Coordinator Tiffany Izard McGee offered to meet Nash weekly to work out any technological difficulties.

“The fact that the UMSL staff was willing to go the extra mile to make sure that I was successful totally sold me,” Nash said.

Nash’s experiences at UMSL have lived up to her expectations, and her favorite part of class and learning has been thinking large. That’s been especially poignant as she learns about global and population health and works during the pandemic.

“We’re learning about health policies, ethics and making changes,” she said. “Seeing our world go through these changes and watching policies and practices evolve, sometimes right before our eyes, is really cool because we’re living the things that we’re learning about.”

Nash has already started to implement that knowledge in taking care of the larger community as a school nurse. During the pandemic, that’s meant helping the entire school understand special awareness and hygiene to prevent outbreaks.

She’s also started to work on two long-term projects. One is an awareness program about mental health and social media and how they impact body image. The other concerns the potential aftereffects of the pandemic.

“After this pandemic, once things get back to whatever the new normal is, there’s going to be a new PTSD and a new series of germophobic kids who don’t know how to socially interact the way you and I knew how to socially interact five years ago,” Nash said. “I want to help bridge that and help the kids through the trauma that this pandemic has caused.”

Chapter 5: Back to ZZ

Amid the turmoil of the pandemic and the academic challenges of nursing school came that conversation about bringing ZZ to St. Louis.

Lt. Nash has met her in 2012 when she was working as a translator with the U.S. coalition forces, and her story touched him and so, too, CJ Nash.

“My heart was not longing for adopting anybody,” Nash said. “But when my husband mentioned it, it was all I ever wanted. It was in my heart. I just had to have her here.”

As the U.S. withdrew from Afghanistan, it became increasingly urgent that ZZ leave the country for her own safety.

The months from when the Nashes decided to try to bring the now-24-year-old ZZ to St. Louis in February to her arrival brought moments of joy and elation as she made progress such as passing her medical screening or receiving her visa. But then there would be a setback, such as when ZZ’s passport was delayed.

“Every time that there was a delay, my heart would get ripped,” Nash said.

“At that moment, when I knew that she was safe, it was the most amazing sense of relief,” Nash said. “Later that night, she landed in DC, and I was so happy. Now, she’s my third kid, and I love her as much as my others.”

Set to graduate with her BSN after this semester, Nash feels ready for a break from school so she can focus on her expanded family.

“I’ve really enjoyed learning, and I’ve enjoyed the projects that I’ve been able to work on,” she said. “But it’s a lot of work, and I’m ready to put down the books and work with my school district to get some things going that I’m excited about, and also to be able to enjoy my evenings with my family again, and not have to say, ‘OK, I love you, but I’ve got homework to do.’”

Earning her BSN will allow Nash to work on those efforts to benefit her community’s health at large and do more to take care of her students. She also says that it’s her husband’s turn to go after an advanced degree.

But despite being ready for that break, Nash has a certain gleam in her eye when she thinks about more education down the road and possibly teaching.