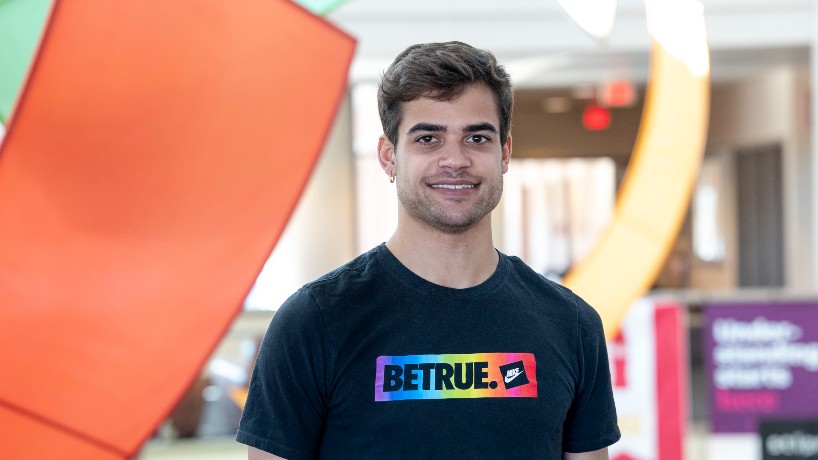 Sport management and psychology major Jake Bain, once a star athlete, came out in his senior year of high school and has become a widely known advocate for the LGBTQ+ community in sports. (Photo by August Jennewein)

Jake Bain had been a standout athlete most of his life, and in his senior year at John Burroughs School he was named captain of the football team. He had college recruiters chasing after him and seemed like he’d have his pick of universities at which to play. Bain was surrounded by opportunity and headed down the path he’d been destined and expected to take.

Then, on National Coming Out Day in his senior year, Bain announced in a speech to his entire high school that he was gay. The clear path that had been mapped out for him became hazy.

He had to learn to cope with sudden fame and confront a backlash from people who didn’t know him but objected to his sexual orientation. It took a psychological toll.

Now, nearly five years and two universities later, Bain is at University of Missouri–St. Louis utilizing his experience as an athlete and challenges with mental health as he pursues degrees in sport management and psychology. With a strengthened sense of self, he is pursuing his mission as an LGBTQ+ and social justice advocate, and he was recently awarded an UMSL Dr. Martin Luther King Jr. Scholarship.

Initially Bain’s announcement in high school was met with massive support from schoolmates, friends and people all over the country who sent him messages telling him how he helped them realize their authentic selves.

His family, though supportive, needed some time to adjust to this new reality. They had Bain pegged as an athlete, a straight athlete, and were fearful of potential hostile backlash. Unfortunately their fears had merit.

Some recruiters backed off. Bain began receiving hateful anonymous text messages and was bullied on social media. Even a group from Westboro Baptist church showed up at his school in an organized protest to publicly denounce his identity.

The students and alumni at John Burroughs banded together to support him. But that did not protect him from being subjected to slurs on the field from some opposing team members.

At 18 years old, Bain, once the archetypal star athlete, was now being involuntarily rebranded as the “gay athlete.” His future was shifting as he also tried to figure out how to navigate being targeted for defying others’ definitions of who he should be.

Some of this he’d predicted, but that did not prevent Bain from becoming depressed and anxious as he faced all the venom aimed at him, just for being himself.

Bain accepted a football scholarship to Indiana State University and became one of the first openly gay players at the NCAA Division I level. His coach welcomed him and offered assurance that he’d be accepted as a teammate and not singled out for his sexual orientation.

But Bain’s newfound fame – including being featured in national news articles and making an appearance on “The Ellen DeGeneres Show” – made it difficult for him to stay focused on school and football.

“There had been so much attention, both good and bad, surrounding my whole story at that time,” Bain said. “It had gotten to be so much more than football and what I had originally expected it to be. I couldn’t really enjoy just being a student-athlete.”

So, Bain decided to leave school and football and focus on himself, including his mental health. It wasn’t an easy decision to give up the sport that had been such a core part of his life for so long.

“It was definitely challenging in terms of feeling like I had more to give, and I still do,” he said. “I still feel like I could get suited up today and step out there and compete pretty dang well.”

Quitting not only meant leaving a passion behind but risking disappointing those who had so strongly defined him as an athlete.

But he started on a journey to redefine himself for himself. He took off a semester and then enrolled at North Carolina State University to be closer to his high school sweetheart.

Bain spent about a year in North Carolina, but school became expensive, and he didn’t feel he was getting his money’s worth for an online education during the pandemic. So, he packed up again and came back home – this time returning as his authentic self – while enrolling at UMSL to continue working toward his degree.

He came back not having to worry about engaging in the exhausting act of code switching, something he was used to as an African American, but that was an added burden in protecting his sexual orientation.

“I felt like I was having to put on a show almost,” Bain said. “Not being able to live my true self. It was really hard to try to do. Always constantly checking myself internally, like ‘Oh, I can’t say that,’ or ‘I can’t like that.’ The way I would talk was a very big thing for me at the time. I never wanted to ‘sound gay,’ if that’s even a thing.”

Part of Bain living his truth has involved becoming more engaged with issues of social justice. He parlayed that ambition into a role with UMSL’s Office of Student Involvement as the student programs manager for LGBTQ+ and Diversity Initiatives, helping to build awareness of the queer and oppressed communities. Among his goals is changing the perception of the LGBTQ+ community in sports, and he has created an organization called Sports are Universal.

“I’ve always felt like I wanted to leave spaces a little better than I found them,” Bain said. “Sports have always been such a huge part of my life. And now that I’m starting to take a different step in sports and not being an athlete anymore, I want to hopefully use my voice more in the sense of enacting change in sports. Hopefully, once it’s all said and done, I’m able to lay my head down and rest because things will have changed and there will be more of an accepting environment for the LGBTQ+ community in sports.”

Though at one time he wondered what his life would be like had he not come out, Bain is at peace with exchanging his sports career for his current platform for LGBTQ+ and civil rights activism. He also feels empowered by living authentically.

“I don’t have regrets,” he said. “At the end of the day, I am happy with the way everything turned out.”

And that includes his choice to attend UMSL.

“It’s been a great fit for me,” Bain said. “Obviously, I knew about it just growing up in St. Louis and from a sports perspective. But in terms of the actual campus itself, I didn’t know much about it. So, coming here, I’ve been really impressed and really, honestly love everything about the campus.”

As UMSL helps prepare him for his future, Bain, at 22 years old, is already looking back on what he will leave behind.

“I think I’d like to be remembered,” he said, “as someone who wasn’t afraid to put himself out there so that other people can see they weren’t alone.”