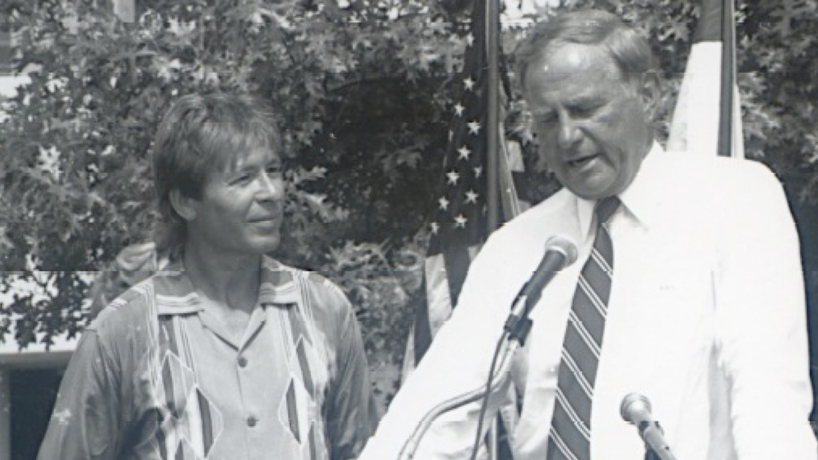 Robert R. Hermann had the honor of presenting recording artist and activist John Denver with the first World Ecology Award on Sept. 13, 1990, at the University of Missouri–St. Louis.

More than 30 years later, the award – established by Hermann to recognize eminent individuals who have made significant contributions to the protection of the global environment and a better understanding of the balance between human habitation and the Earth’s biodiversity – will bear his name.

UMSL’s Whitney R. Harris World Ecology Center is rebranding the award to be the Robert R. Hermann World Ecology Award in recognition of the St. Louis businessman and philanthropist’s idea for the creation of the center and his support of its mission to train global ecology and conservation leaders while promoting community education and fostering scientific research in the years since.

That support has continued even after Hermann’s death on April 5, 2020, with a donation to the Harris Center by his son, which will endow the annual World Ecology Award Gala.

“Robert Hermann led a group of prominent members of the St. Louis community in conversations with the UMSL leadership to establish what began as the International Center for Tropical Ecology,” said Patricia Parker, the Harris Center’s director and the E. Desmond Lee Endowed Professor of Zoological Studies in UMSL’s Department of Biology. “He also was instrumental in the conception and formalization of the World Ecology Award, designed to identify illustrious individuals who brought people’s attention to the beauty and value of nature, whether through their science, their work in environmental policy-making or even in their art.

“More than thirty years later, we recognize Robert Hermann’s leadership in our founding and hope he would be proud of what we have accomplished.”

More than 20 people have received the World Ecology Award since Hermann first presented it to Denver as part of a World Ecology Day at UMSL. Other recipients include noted scientists such as Jane Goodall, Sylvia Earle and Edward O. Wilson and activists and philanthropists such as Ted Turner, Harrison Ford, Teresa Heinz, Britain’s Prince Charles and Prince Albert II of Monaco.

In November 2019, the Harris Center honored its longtime partners, the Missouri Botanical Garden and the Saint Louis Zoo, for their ongoing conservation efforts in Madagascar.

Since its inception, the Harris Center has helped support more than 300 graduates who have earned either a master’s degree or PhD from UMSL by providing them with fellowships, research and travel grants and other scholarships. Those graduates have come from more than 40 countries, with many returning home to lead conservation efforts in those countries after completing their degrees.

The World Ecology Award Gala has been a significant fundraiser for the Harris Center, and the endowment created with the Hermann family’s donation will cover the costs of the event, leaving even more money available to support students.

“Dad would be proud to see the thriving status of the World Ecology Center and its students, which has swiftly navigated the challenges to learning presented by the pandemic,” Robert R. Hermann Jr. said. “He cared deeply about protecting both the St. Louis community and world we live in through active conservation efforts. I am excited to see his legacy continued through the naming of the Robert R. Hermann World Ecology Award.”