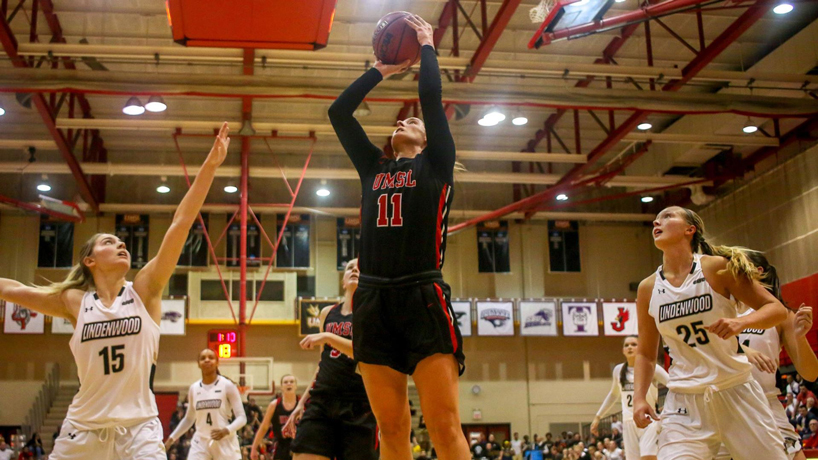 Senior forward Alex LaPorta pulled down her school-record 1,029th career rebound on Saturday in a rout of William Jewell.

Women’s Basketball
It was a historic week for the UMSL women’s basketball program as Coach Katie Vaughn, already the winningest coach in school history, notched her 150th career victory in Thursday’s 61-57 victory at Rockhurst, and senior forward Alex LaPorta pulled down her school-record 1,029th rebound in Saturday’s 70-44 rout of William Jewell. LaPorta finished with 10 points and seven rebounds against William Jewell. Frontcourt mate Kiara Stewart had 14 points and 11 rebounds to pace the Tritons in the victory. Mallory Ronshaunsen, Faye Meissner and Stewart combined for 37 points to lead UMSL past the Hawks on Thursday in Kansas City. UMSL (13-2, 9-1 Great Lakes Valley Conference) are back home this week with games against Maryville tonight, Drury on Thursday and Southwest Baptist on Saturday.

Men’s Basketball
UMSL squandered a 12-point second-half lead in a 68-67 loss at Rockhurst on Thursday but bounced back with a 71-61 victory at William Jewell on Saturday. Yaakema Rose Jr. scored a team-high 23 points and grabbed six rebounds against the Hawks, but he couldn’t get his final shot to fall in traffic in the final five seconds of Thursday’s loss. Rose had 13 points against Rockhurst, and Marty Jackson and Steve Webb combined for 27 off the bench against the Cardinals. Jackson also had six rebounds and three blocked shots in Saturday’s victory for the Tritons (13-5, 7-4 GLVC). Coach Bob Sundvold‘s team returns to the court on Thursday against Drury and Saturday against Southwest Baptist. Both games will be played at the Mark Twain Athletic Center.

Men’s and Women’s Track
The Tritons men’s and women’s track teams opened their winter indoor schedule by competing in the Principia Relays in Elsah, Illinois. Sophomore Benjamin VandenBrink, injured much of the fall cross country season, was back in form on Saturday and took first place in the men’s 1-mile race, setting a meet record with a time of 4 minutes, 25.55 seconds. Vandenbrink also joined teammates Kendrick Nall, Gavin Love and Jacob Warner on the second-place medley relay team. Lily Wagemann finished eighth in the women’s 1-mile race with a time of 5:57.52. Both teams will next compete in the Titan Open, hosted by Illinois Wesleyan, on Feb. 12 in Bloomington, Illinois.