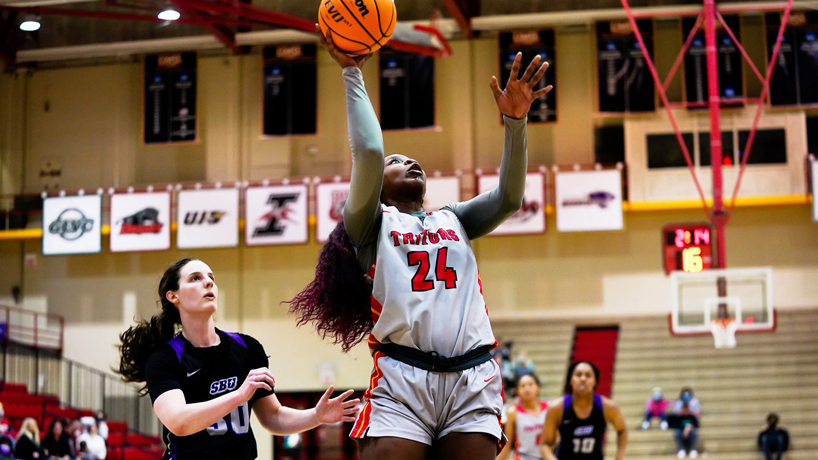 Women’s Basketball
UMSL continued its season-long surge by sweeping three home games last week, including a 75-65 victory over fourth-ranked Drury on Friday night. The Tritons (16-2) also beat Maryville 68-56 on Monday and Southwest Baptist 75-57 on Saturday. They have now won six straight and 16 of their last 17 and sit atop the Great Lakes Valley Conference Central Division standings with a 12-1 mark in league play. Senior center Kiara Stewart averaged 15.3 points and 7.7 rebounds in last week’s three victories, including 19 points on 8-for-8 shooting against Drury and 21 points on 10-for-12 shooting against Southwest Baptist. Senior guard Faye Meissner also averaged 15.3 points, including 19 in Friday’s victory over the Panthers. UMSL plays host to Rockhurst tonight before visiting Maryville on Thursday and Missouri S&T on Saturday.

Men’s Basketball
The Tritons split a pair of home games, routing Drury 80-62 on Friday before coming up short against Southwest Baptist in a 70-66 loss. Senior forward Marty Jackson average 19.5 points and six rebounds in the two games. Swingman Jose Grubbs joined him in double figures with 12 points against Drury, while guard Steve Webb had 15 points against Southwest Baptist in a game that featured 10 ties and nine lead changes. UMSL only shot 41.7% from the field in the second half against Southwest Baptist after shooting 52% in the first 20 minutes, and it went 2 for 11 from beyond the 3-point arc. The Tritons are back in action against Rockhurst tonight at the Mark Twain Athletic Center and will travel to Maryville on Thursday and Missouri S&T on Saturday.