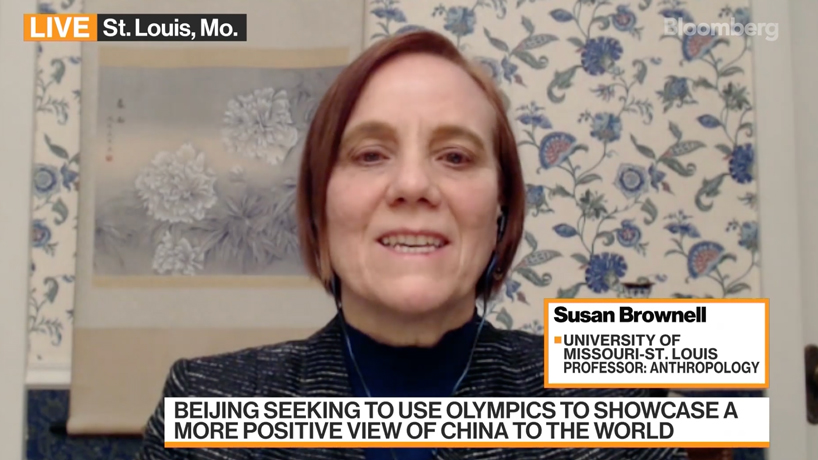 Professor Susan Brownell appears on Bloomberg TV to discuss the Olympics being held in Beijing. (Screenshot)

There has been no shortage of storylines during the opening week of the Olympic Games being held in Beijing.

The most visible face of Games so far belongs to Eileen Gu, the California-born freestyle skier, who won gold in the big air event representing not the United States but the host country, China.

The Chinese have won three gold medals so far, the first earned in short-track speedskating mixed-gender relay by a team featuring Fan Kexin. He trained in the small coal-mining city of Qitaihe, which had produced seven of China’s 16 Winter Olympic gold medalists since 2002.

In the background of the competition is the ongoing coronavirus pandemic and the geopolitics surrounding the Games, which the United States and several of its Western allies have opted to boycott diplomatically, citing “genocide and crimes against humanity” for China’s treatment of Uyghurs and other predominantly Muslim ethnic minorities in the northwestern region of Xinjiang. 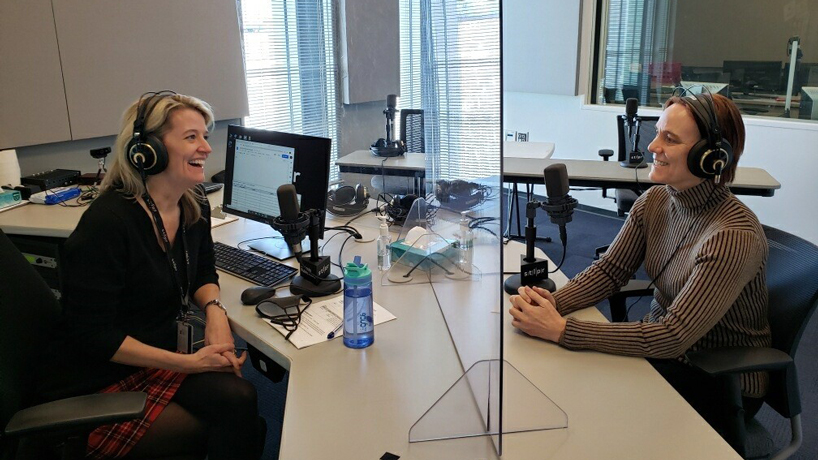 Susan Brownell, a professor of anthropology in the Department of History at the University of Missouri–St. Louis and an internationally recognized expert on the Olympics and Chinese sports, has been plenty busy lending her perspective to those stories and more.

In the past week alone, she’s been quoted in stories in The New York Times, The Washington Post, The Wall Street Journal and The Wall Street Journal and been a guest on Bloomberg TV, Bloomberg Radio and the show “1A,” produced by Washington, D.C., radio station WAMU and distributed by NPR. On Thursday, she also appeared as a guest on “St. Louis on the Air” on St. Louis Public Radio.

In nearly every interview, she was called upon to reflect on the wider significance of these Olympics for the Chinese government and its place in the global community.

“China doesn’t get changed by the Olympics the way that the China critics hope,” Brownell said in her appearance on Bloomberg TV this week. “But even so, we do have to consider that the organization of a megaevent involves a huge amount of interaction with international actors. That process does help China hook up with the international community, as they like to say, and the media scrutiny probably helps China’s leaders better gauge the opinion of China in the outside world.”

The significance of these Games seems different than when Beijing hosted the 2008 Summer Games.

“In 2008, everybody was clear that that was China’s coming out party on the world stage,” Brownell told “St. Louis on the Air” host Sarah Fenske on Thursday. “That was the meaning they attributed to it, and everybody else was on board that that was what it meant. But even when they were bidding, the meaning of this particular Games wasn’t quite as clear. Then I think the COVID epidemic complicated that. So, it’s not a coming out party. They’ve already arrived, and maybe, to some extent, it’s an affirmation that they are here and we’d better deal with it.”

Appearing on 1A, Brownell was asked about the Biden administration’s decision to engage in a diplomatic boycott.

“I personally think it’s a missed opportunity for the Biden administration, especially when I think back to 2008 when George Bush, not only attended the Games but took his wife and daughter and had a tremendous presence in the Chinese media, which I thought was very well done,” Brownell said. “They saw him wearing tennis shoes and riding a bike and doing a lot of things that that then-President Hu Jintao would never have done. I thought that he probably had a huge impact in presenting a positive image of the U.S. within China and possibly making them rethink the way their own leadership presented themselves. Biden is just totally missing the opportunity to reach out to the Chinese audience like that.”

Brownell also The Washington Post about the practice of athletes such as Gu, who’ve become naturalized Chinese citizens in order to compete. It’s been going on for years in other countries, but it’s relatively new in China.

“When I realized it was happening, I was pretty shocked,” Brownell said. “The reason it hadn’t happened before was, quite frankly, xenophobia.”

Not everyone has been as successful or received as warmly as Gu.

“The official attitude is to hold up returnees as heroes,” Brownell told the Post. “You have to hope that the nasty nationalists become outliers.”

Brownell was a nationally ranked track and field athlete in 1980 when the United States engaged in a full-scale boycott of the Summer Games in Moscow.

She began building her knowledge and expertise of China as a graduate student, when she spent a year studying there and joined the track team at Beijing University in 1985-86. She represented the university in the 1986 Chinese National College Games and set a national record in the heptathlon.

Brownell returned to Beijing Sport University while conducting research for her dissertation in 1987-88.

Since then, Brownell has been the author of such books as “Training the Body for China: Sports in the Moral Order of the People’s Republic,” “Beijing’s Games: What the Olympics Mean to China” and “The Anthropology of Sport: Bodies, Borders, Biopolitics” and co-edited the book “The Olympics in East Asia: Nationalism, Regionalism, and Globalism on the Center Stage of World Sports.”