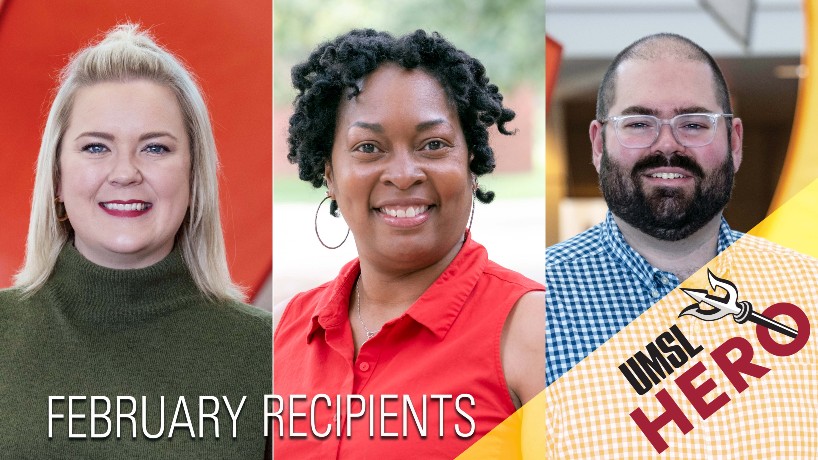 From left, Mindy Dilley, Devin Dixon and Jeremy Knake were named the February recipients of the the UMSL Hero Award. Each will receive an UMSL Hero lapel pin in recognition of their contributions. (Photos by August Jennewein)

This month’s honorees are Mindy Dilley, associate director in the Office of Student Involvement; Devin Dixon, the Master of Social Work program and Field Education coordinator for the School of Social Work; and Jeremy Knake, business manager for UMSL Facilities Management.

Dilley didn’t always have her sights set on working with students in higher education. She initially set out to be a dentist.

But while in college, staff members in student affairs and student involvement noticed she was very active in events and planning and observed her aptitude for that kind of work. They suggested she’d be a great fit for a career in the field of student affairs. Dilley considered it and realized it was a great match with her skillset and personality.

Dilley is the associate director in the Office of Student Involvement, where she and her staff endeavor to engage students in campus life and provide guidance to resources. Her role can involve anything from planning student events to lending an ear to students in need of solace and direction. Her consistent efforts to go beyond the call have resonated with her collaborators.

“Over the past year, Mindy was tasked with filling in the gaps for multiple programs because of staff losses,” Teaching Professor Lynn Staley said in nominating Dilley for the Hero Award. “She heroically took over the huge task of creating programs and working with committees for all the history and heritage month events. I sat on many of these committees, and Mindy brought all her creative energy to the projects.”

When Dilley learned she’d received the USML Hero Award, she was surprised and even more elated to learn she’d been nominated by Staley, who teaches English and Gender Studies. Dilley didn’t expect her natural avidity to serve students to be recognized in a public manner, but the honor is a nice reminder of why her work is important.

“Everyone likes to be appreciated, and it makes me feel good,” Dilley said. “It reminds you that we’re doing this work for a reason. Sometimes it’s hard to remember.”

Dilley graduated with a bachelor’s degree in chemistry and communications and a master’s degree in student affairs. She’s currently pursuing a doctorate in education at UMSL.

After working at several other Midwest universities, Dilley landed at UMSL nearly five years ago. Some of the best experiences of her time at the university have been seeing her staff flourish, particularly over the past two years.

“Ariana Smith has come on as the LGBTQ+ and diversity coordinator and they’re rocking our history and heritage month,” Dilley said. “They’re doing a safe zone training next week that’s already hit capacity and has a 20-person waitlist. Jessica Mode is the student activities coordinator and was critical in ensuring that the good work of our office continued when we were severely understaffed. She stepped up big time and truly is such an asset to the team as a seasoned professional.”

Dilley is also happy her team has been helping students stay connected while navigating the pandemic.

“Michaela Wells is our new coordinator for student organizations and fraternity and sorority life,” Dilley said. “They’re rocking with bringing in a new engagement platform for the summer, which gets students more involved and helps student organizations stay afloat through all of this. I honestly think that’s my favorite part of my role – just watching them.”

Dixon’s association with UMSL began long before she became an employee nearly five years ago.

Her father, Rev. James Dixon II, was the first African American student to receive a doctorate in education in 1988 from UMSL. Though his legacy didn’t impact her decision to join the university, it makes her proud to be here doing her best work.

Devin Dixon was surprised to learn she’d been selected for the Hero Award because her natural inclination is to be student-focused.

“I can’t really explain it because it’s just what I do,” Dixon says when attempting to describe her commitment to her work. “This is the standard I set for myself.”

Though capturing her pledge to serve students in words may be challenging, Dixon’s dedication was evident when in 2021 she worked for five months in the office alone as it was more efficient than working from home.

“Working alone was peaceful – singing loud to my favorite tunes. Fun stuff for sure!” Dixon joked.

Professor Shirley L. Porterfield nominated Dixon because of her ability to juggle multiple responsibilities and stay organized under pressure and to do so with grace.

In addition to coordinating student field work, Dixon also processes 70-100 applications to the School of Social Work twice each year. This entails uploading them into different systems for review and communicating with students, their references, professors and other faculty. This process can be tedious, working with different software to handle separate parts of the applications, but Dixon’s developed ways to ensure accuracy and security.

Dixon has proven to be a problem solver but also a voice of assurance when anxious students call to follow up on their applications.

“Without Devin, it would be easy to lose applicants given our cumbersome system,” Porterfield says. “We have had other people in this position but never someone as calmly competent as Devin.”

Though Dixon enjoys her job overall and how it enhances the experience of incoming students, she feels the best part is the camaraderie in her department.

Jeremy Knake thought he might one day end up a history professor after earning a bachelor’s degree in history and political science with an emphasis in public law from Northern Illinois University.

But he came to UMSL nearly five years ago to serve as an office support assistant and was promoted to business support specialist. He has been working to secure services, negotiate contracts and handle risk management for the university, and he’s loved the variety of responsibilities that come with the position and the people he’s worked with.

His dedication to doing his best work and helping his teammates has earned him an UMSL Hero Award.

“Jeremy has continued to go above and beyond,” business support specialist Karen Bartoni said in nominating Knake for the award. “Whether it be a question regarding the new contract portal or helping me write a new contract template, he is always willing to go the extra step to make the process simple and never complains about the many issues that arise with existing contract templates.”

Knake landed at UMSL after moving to St. Louis with his then-girlfriend and now wife after she got a job in the area. He had previous experience working in higher education as a graduate assistant.

His degree in political science with an emphasis in public law helped prepare Knake for a role in Business Services, as reviewing contracts for campus projects was part of his coursework. Contracts are just one of tasks that have made the role so appealing to Knake. Other responsibilities include managing the needs of special events.

“If anybody has an event they think might have a component risk, they’ll ask us,” Knake said. “Then we go up the next chain to the risk insurance management system. It’s like, ‘Oh, you’re going to have kids potentially climbing 60 foot trees? We probably need something that says that they’re aware of the risks.’ So, yeah it’s things like that we have to manage.”

Knake views his work and doing it well as nothing more than his responsibility and didn’t expect to be formally recognized for his contributions.

“I was surprised,” Knake said. “You see people you know get nominated for the award – folks that are up there, being profiled, and you’re like, ‘I work with that person and they do a lot for the university.’ And sometimes you just think, ‘Oh, yeah, I’m just sitting here processing contracts.’ It’s like I’m not really making that much of a difference, so it was definitely a surprise.”

Knake’s hard work has not only earned him an UMSL Hero Award but also a new position at UMSL. Jeremy recently became the new business manager for Facilities Management. His humility behind his hard work is another reason he’s considered an UMSL Hero. The regard his colleagues have for him is mutual.

“Everybody is fantastic at the university,” Knake said. “It’s a really good group of people to work with.”