Black Faculty and Staff Association panel explores past, present and future of struggle for racial equality and justice 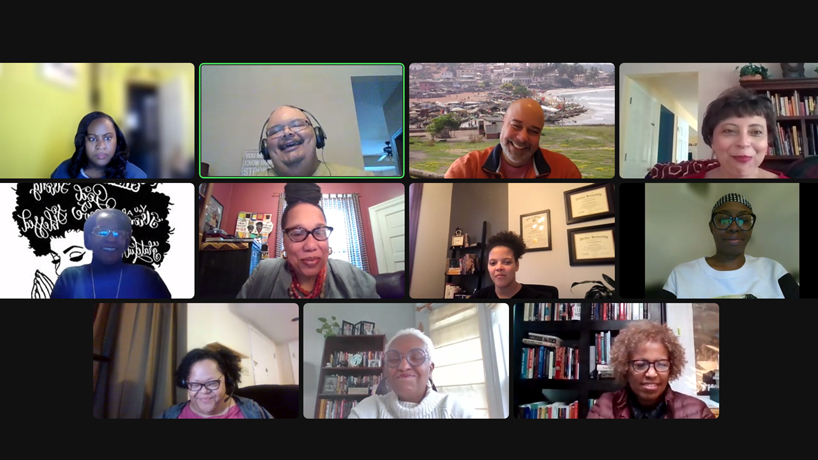 Black History Month often serves as a time when people take stock of racial progress in the United States, and that seems particularly true today as many states enact restrictive voting laws that appear designed to have the largest impact on communities of color and outrage over “critical race theory” swirls in political debate.

Last week, the Black Faculty and Staff Association at the University of Missouri–St. Louis brought together three faculty members from different academic areas to share their perspective in a Black History Month discussion titled “Know the Past, Understand the Present, Shape the Future.”

Priscilla Dowden-White, an associate professor in the Department of History; Thomasina Hassler, an assistant teaching professor and the director of the Matthew D. Davis Racial and Social Justice Institute in the College of Education; and Matthew Taylor, an associate professor of clinical psychology and the associate dean for faculty affairs in the College of Arts and Sciences shared their expertise with an audience of more than 30 people tuning in via Zoom on Thursday afternoon.

“We are no longer living in a period of legalized institutional segregation,” Dowden-White said during her opening remarks. “But the legacy of it is still having significant impacts on our lives.”

That is evident in the disparities that remain between Black and white people in wealth, employment, educational attainment, public health and interactions with the criminal justice system and so much more.

Taylor, who has studied the health of historically minoritized individuals as well as multicultural psychology, said that for many Black people, those societal inequities can also impact their own sense of self.

“Du Bois talks about this a lot – how does it feel to be a problem and identified as a problem by mainstream society?” Taylor said. “I think a lot of folks have internalized that and firmly act that out. That is through no fault of their own on some level, but ultimately, are we defining ourselves within or without by other people’s definitions?”

Hassler studies the intersection of social justice and education. She said the impact of that daily psychological toll remains poorly understood.

But that does not lessen the need for actions to change it.

“In terms of thinking about how to solve issues, I don’t really think that this whole issue of racism is going to be solved in our lifetime,” Hassler said. “But I do think that we are accountable, to continue to use whatever gifts we have to dig out the mortar between those bricks – even if we’re using a knife. We’ve got to be able to do that, to make that contribution. There are changes. There have been changes, but it’s not near enough. We’re still dealing with the same issues in the 21st century. They’re dressed up with technology, but it’s the same old suit worn over.”

Dowden-White, whose book “Groping toward Democracy: African American Social Welfare Reform in St. Louis” spotlights actions and events that occurred between 1910 and 1949 with consequences stretching into the present day, certainly understands the sense of pessimism that has been growing in recent years, but she encouraged attendees to not lose sight of the progress that has been made.