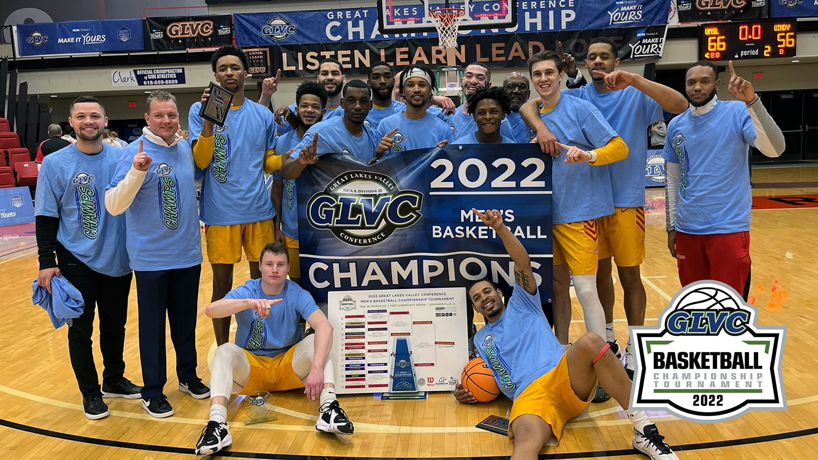 It was almost two years ago that University of Missouri–St. Louis men’s basketball players had their dreams of playing in the NCAA Division II Tournament dashed while sitting on a bus outside the Mark Twain Athletic Center.

The onset of the coronavirus pandemic forced the abrupt cancellation of that tournament as the team was waiting to depart for its first game in Indianapolis.

That made the euphoria they felt that much greater on Sunday afternoon as Webb dribbled out the final seconds on their 66-56 victory over Indianapolis in the Great Lakes Valley Conference Tournament championship. That secured UMSL’s second NCAA Tournament berth since 1988.

“We had our COVID issue where we didn’t get to play in the tournament, and then then last year, we had shortened season and the NCAA reduced it to six teams in the region instead of eight, that probably cost us a chance to make the tournament,” Coach Bob Sundvold said. “Afterward, we sat down after it, and I said all you guys are capable of graduating and going on, and they all made a decision, ‘We’re coming back, and we’re gonna try to do this.’ So, for me, the weekend was really all about those guys being able to kind of fulfill a goal they had together.”

This time, they’re going to get to play as the No. 5 seed in the Midwest Region. The Tritons – who won their first GLVC Tournament title – are scheduled to face No. 4 seed and conference rival Truman State in the opening round at 6:30 p.m. CT on the campus of top-seed Walsh University in North Canton, Ohio.

UMSL dropped both its regular-season meetings against Truman State, losing 72-71 on Dec. 2 in Kirksville, Missouri, and 79-72 on Jan. 20 when the teams played at the Mark Twain Athletic Center.

But the Tritons have only lost twice since then and will take the court Friday night riding a 10-game winning streak that included wins against Drury, Southern Indiana, William Jewell and Indianapolis en route to the conference tournament title, which was settled at Southern Illinois University Edwardsville’s First Community Arena at the Vadalabene Center.

It did not seem at the start of the GLVC final that UMSL would have much to celebrate Sunday as Sundvold’s team missed its first 10 shots and fell behind 18-0 through the first 6½ minutes.

“I don’t know that I’ve ever started out 18-0 and being on the zero, and I’m not sure I’ve ever started out being on the 18,” Sundvold said. “The thing you’ve got to do is have a little trust that, ‘OK, we’ve got a lot of time.’  That was the only thing I talked about in our first timeout was, ‘Hey, there’s 40 minutes and this is just part of it. You’ve just got to hang in there and keep trying to do what we do, and we’ll see what happens.’ I was thankful that the guys would not panic and and hang in and get back to the little thing they’re trained to do.”

Redshirt sophomore Isaiah Fuller, another member of the 2019-20 team, finally got the Tritons on the scoreboard with two free throws with 13:27 left in the opening half, and they sparked a 26-3 run, capped by Wissink’s 3-pointer with 3:24 left. On a day when he set the school record with his 186th career 3-pointer, Wissink knocked down two more shots from beyond the arc to push the UMSL advantage to 32-23 with 2:11 left.

“Defense was the key for us,” Sundvold said. “But and then offensively, we got some really big moments. Shane Wissink was huge with his 3s, and Isaiah Fuller off the bench was big in getting to the free-throw line and getting some layups down early for us. I just thought we got things right, and we got it turned around and then played the way we’ve been playing.”

UMSL led 36-28 at the break and never trailed in the second half.

Wissink, who’d scored a season-high 28 points in Friday’s quarterfinal victory over Southern Indiana, finished with a game-high 19 points and went 5 for 7 from beyond the 3-point arc. He was named the tournament’s most valuable player.

Junior forward Marty Jackson had 12 points and eight rebounds on Sunday and joined Wissink on the all-tournament team. He averaged 15.7 points over UMSL’s four games.

Webb, who earlier in the week was named the GLVC Defensive Player of the Year for the third straight season, also was named to the all-tournament team. He averaged 10.7 points and tallied 10 steals over UMSL’s final three tournament games.

The women’s team set a school record for victories with 23 and finished in first place in the GLVC Central Division. Coach Katie Vaughn was chosen the GLVC Chuck Mallender Coach of the Year, and seniors Alex LaPorta and Kiara Stewart were both unanimous first-team All-GLVC selections. Faye Meissner was voted to the ALL-GLVC second team, and freshman guard Mallory Ronshausen was named the league’s Freshman of the Year, joining teammate Jalysa Stokes on the all-freshman team.

“I think it’s really great for the school – for UMSL to get a little more credibility every year and to get better in the minds of people that are following basketball,” Sundvold said. “Especially this year with Katie’s team doing so well. Now, we’ve got both teams in the NCAA Tournament. I think it’s just great for the school.”