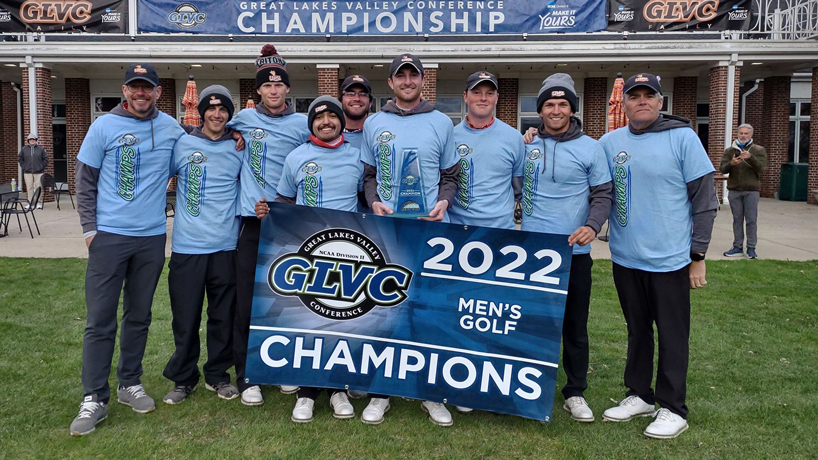 Men’s Golf
The 25th-ranked UMSL men’s golf team captured the 2022 Great Lakes Valley Conference Championship, defeating Indianapolis 3-0-2 on Sunday in the medal match at Broadmoor Country Club in Indianapolis. It was the Tritons third GLVC title – all under the leadership of Coach Troy Halterman. UMSL previously won titles in 2015 and 2016. The Tritons had secured the top seed in Sunday’s match play competition after posting a combined score of 858 through 54 holes of stroke play. Senior Joel Sylven led the way during stroke play, claiming individual medalist honors with a score of 210. All five UMSL golfers finished in the top 12 individually with Reilly Ahearn (215) tying for fourth, Juan Antonio Padilla (217) tying for sixth, Nick Hedberg (218) placing 11th and Ian McCrary (221) tying for 12th. As the championship shifted to match play on Sunday, the Tritons pulled out a 3-2 victory over fourth-seeded McKendree in the morning semifinal before advancing to the championship and topping Indianapolis. The win came with the GLVC’s automatic bid to the NCAA Division II men’s golf tournament. The NCAA Midwest/Central Regional Tournament will run May 5-7 in Noblesville, Indiana.

Women’s Golf
The Tritons blew away the field at the UMSL Spring Invitational last week, winning by 44 strokes over runner-up Lindenwood in the 17-team field at Norwood Hills Country Club. Freshman Tove Brunell won medalist honors for the second time this season to lead the Tritons as she posted a combined score of 226 in the 54-hole tournament. All five UMSL golfers finished in the top 12 with Juliette Lecomte (231) tying for third to join Brunell on the all-tournament team, Manon Labeur (234) tying for eighth, Victoria Klausner (235) placing 10th and Momo Kikuchi (237) finishing 12ths. The Tritons will next compete in the GLVC Tournament beginning Friday at Annbriar Golf Course in Waterloo, Illinois.

Baseball
UMSL’s week got off to a rough start with a 10-1 home loss against Illinois Springfield on Tuesday, but the Tritons finished strong, taking the final three games of a four-game series against visiting Lindenwood. UMSL swept Friday’s doubleheader against the Lions, winning 5-4 and 4-3. Logan Matz and Clayton Stephens each homered in the first game. Stephens homered again and drove in all four runs in the 4-3 victory. His two-run double down the left field line in the seventh gave the Tritons a walk-off win. Jack Rhodes held Lindenwood to three hits in eight shutout innings, and Trent Anderson closed out a 2-0 victory in Saturday’s series finale. UMSL (9-21, 9-7) will play host to Rockhurst in a four-game series beginning Friday.

Softball
The Tritons snapped a seven-game winning streak and were swept in a doubleheader Saturday at No. 5 Indianapolis. UMSL (26-15, 15-7 GLVC) had a one-run lead through four innings in the opening game after RBI singles by Megan Brown and Riley Schultz. But the Tritons couldn’t hold the advantage, giving up two runs on a Dominique Proctor home run in the fifth inning and losing 3-2. Greyhounds pitcher Haylie Foster no-hit UMSL in the second game as UIndy won 4-0. The Tritons travel to Warrensburg, Missouri, to face Central Missouri in a doubleheader on Tuesday and play host to Lindenwood in a doubleheader on Sunday.

Men’s and Women’s Track
Sophomore Jacob Warner had the best showing of an UMSL runner at the Greenville Select meet, placing seventh in the men’s 1,500-meter run with a time of 4 minutes, 3.65 seconds. Benjamin VandenBrink finished 11th in the same race with a time of 4:09.42 while Sam Savastino took 10th in the men’s 5,000 in 16:04.13. Peyton Brueck (20:29.71) and Kayley Heeter (20:37.22) finished eighth and ninth, respectively, in the women’s 5,000. UMSL also got an 11th-place showing by Haeley Johnson in the long jump with a top jump of 4.2 meters. Kennedy Moore (27.93) finished 11th in the women’s 200. The Tritons will compete in the Gibson Invitational, hosted by NCAA Division I Indiana State, on Friday in Terre Haute, Indiana.

Women’s Tennis
UMSL dropped back-to-back dual meets against Drury and Southwest Baptist. The Tritons fell to Drury 4-1 Friday in a meet that was moved indoors at Woodsmill Tennis Club because of rain in the forecast and then lost 6-1 Saturday against Southwest Baptist at the Dwight Davis Tennis Center in Forest Park. Anna Domingo picked up the loan singles victory against Drury, and she also helped UMSL earn the doubles point against Southwest Baptist. The Tritons (7-7, 2-2 GLVC) were shut out in singles. UMSL wraps up its regular season against Rockhurst on Friday and William Jewell on Saturday with both matches scheduled to be held at the Dwight Davis Tennis Center.

Men’s Tennis
The Tritons lost to Drury 4-1 Friday at Woodsmill Tennis Club and fell to Southwest Baptist 4-3 on Saturday at the Dwight Davis Tennis Center in Forest Park. Juan Vigil claimed UMSL’s loan point against Drury when he won the No. 2 singles match 6-3, 6-3. Raphael Kerndl and Karl Heinrichs both won singles matches against Southwest Baptist, and UMSL also secured the doubles point, but the Tritons dropped three three-set matches, including Marcos Navas‘ 2-6, 6-3, 7-6 (3) defeat at No.1 singles. UMSL will take on Rockhurst and William Jewell on Friday and Saturday, respectively, as the Dwight Davis Tennis Center as it closes out the regular season.