Dozens of elected officials and community members gathered Thursday afternoon at the Patient Care Center on the University of Missouri–St. Louis campus to celebrate an unprecedented investment from the State of Missouri in north St. Louis County.

The state’s 2023 budget will direct $40 million in federal funds from the American Rescue Plan Act (ARPA) to UMSL to support a major campus redevelopment. Williams said the funding will create a “campus of the future” that will provide opportunities in a region that has not seen significant investment for decades. Matching ARPA funding from the county could bring the vision to life.

“What began in 2021 as a Campus Master Plan that reimagines the University of Missouri–St. Louis as a metropolitan, public university for the future is today a shared vision and a living commitment to improve the quality of life and economic impact in north St. Louis County,” Sobolik said. 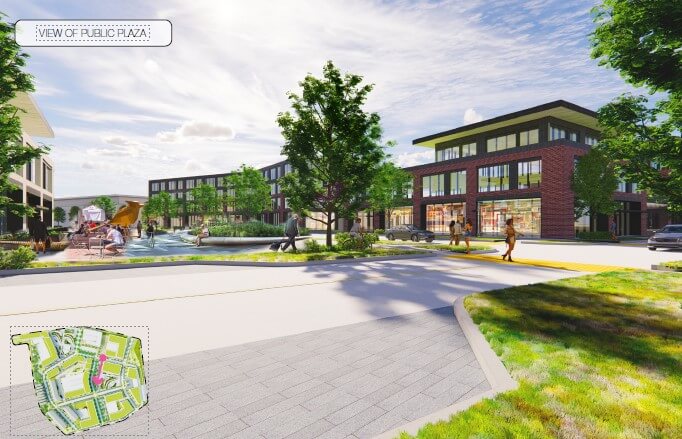 The planned redevelopment calls for a renewed academic core on the North Campus and the establishment of a North St. Louis County Business and Workforce District on the South Campus. (project rendering of community plaza)

The investment will bring UMSL’s Campus Master Plan one step closer to reality. The project calls for the establishment of an academic core on the North Campus, consolidating key academic programs and facilities. This effort will include renovations of classroom and laboratory spaces while strategically paving the way for the redevelopment of 35 acres of land on the South Campus.

That space will be home to the new North St. Louis County Business and Workforce District. The district will include locations for businesses that will bring new employment opportunities to north St. Louis County. The planned redevelopment will also provide surrounding neighborhoods with a community plaza along Natural Bridge Road and community amenities such as health services, a childcare center, a grocery store, restaurants and other mixed-use commercial and residential spaces.

“As UMSL builds on its success, we remain focused on increasing our capacity to help address the complex needs of our students, the region, the state and the nation,” Sobolik said. “We are excited to present this opportunity for growth in north St. Louis County.”

It’s the result of much hard work on Webb’s part, as well as bipartisan cooperation between local officials and the governor’s office.

Days, who also represents District 1, added that the St. Louis County Council intends to match some of the federal ARPA funding for projects throughout the county. The first meeting to discuss potential funding was held Saturday where a working group was established to determine which projects would receive additional support from county-directed ARPA funds.

“This is an opportunity of a lifetime,” Williams said. “I’m very grateful to be able to do these things for our community, for our region. Just know, that always happens when we come together with great ideas.”