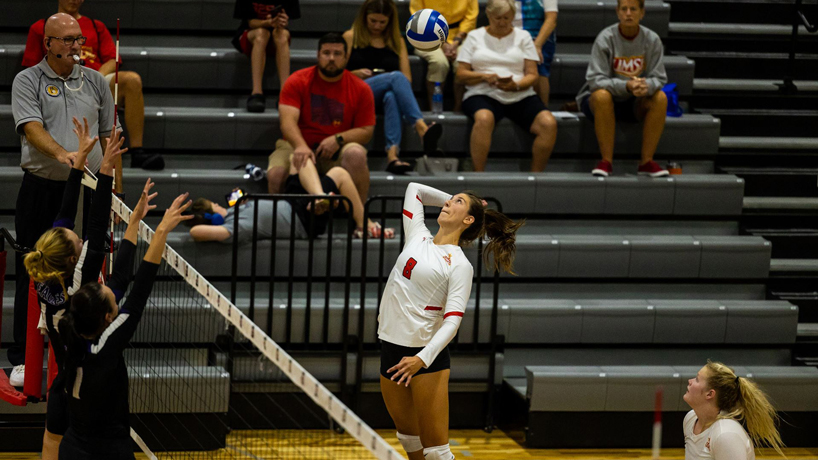 Senior outside hitter Charlotte Richards registered a team-best 55 kills over the weekend as the UMSL volleyball team won three of its four matches at the University of Indianapolis Invitational.

Volleyball
The University of Missouri–St. Louis went 3-1 over the weekend at the University of Indianapolis Invitational, dropping a five-set match against No. 21 Minnesota Duluth but bouncing back with straight-set victories over Minnesota State, Ashland and Ohio Dominican. Charlotte Richards led the Tritons with 55 kills in the four matches, and Lexie Rang had 50 more. Setter Caitlin Bishop tallied a team-high 147 assists while directing the attack, and Kylie Adams had 57 digs. UMSL (6-2) will take on McKendree and Maryville on Friday in Lebanon, Illinois.

Women’s Soccer
The Tritons lost 3-1 Thursday afternoon at Northwest Missouri State to fall to 1-2 on the season. UMSL also had a scheduled match at Kentucky Wesleyan canceled because of weather and poor field conditions on Sunday. Northwest Missouri State outshot the Tritons 10-1 in the opening half and opened up a 2-0 lead at halftime, eventually stretching the advantage to 3-0 before Kendal White got UMSL on the board in the 77th minute. Paige Schwartz made five saves in goal in the loss. The Tritons will try to snap their two-match losing streak when they play at Maryville on Thursday, and they’ll also visit Great Lakes Valley Conference foe Lewis on Sunday.

Men’s Soccer
UMSL dropped a pair of matches last week, losing to Wisconsin-Parkside 1-0 Friday on the road and falling to Kentucky Wesleyan 3-2 Sunday at the Lou Fusz Soccer Complex. Austin Reis made six saves in the shutout loss. The Tritons put together a better offensive showing against Kentucky Wesleyan, outshooting the visitors 18-12 and getting goals from Brady Glon and Leo Sowa – Sowa’s fourth this season. But they still fell short after giving up two goals in the first 16 minutes of the second half to fall behind 3-1. UMSL will visit Lewis on Sunday in its GLVC opener.