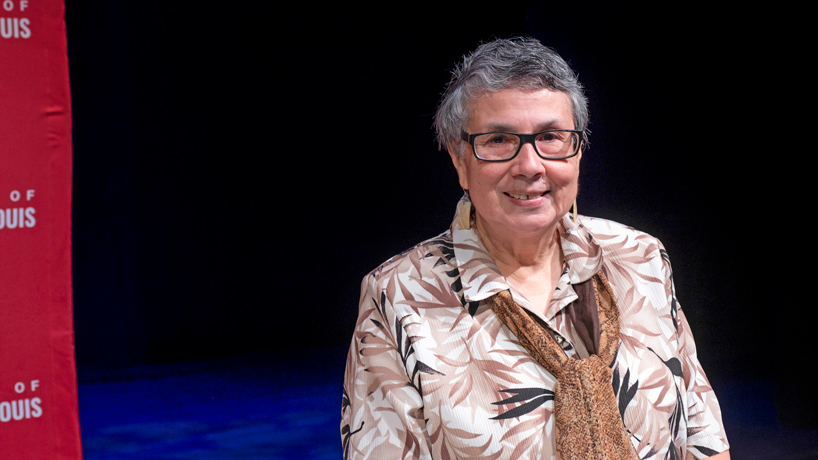 Zuleyma Tang-Martinez, professor emerita in the Department of Biology, received the Animal Behavior Society’s Exemplar Award in recognition of her long-term contributions to the field of animal behavior. Tang-Martinez was also UMSL’s Faculty Retiree of the Year. (Photo by August Jennewein)

Zuleyma Tang-Martinez has been an enthusiastic attendee of the Animal Behavior Society’s annual meeting throughout her 46 years as a member.

But this summer’s meeting in San Jose, Costa Rica, was extra special.

Tang-Martinez, a professor emerita of biology at the University of Missouri–St. Louis, accepted the society’s Exemplar Award, presented each year to recognize major long-term contributions to the study of animal behavior. In Tang-Martinez’s case, it recognized her pioneering research on the importance of odor communication in mammals as well as later work challenging previously accepted ideas from English geneticist Angus Bateman on sexual selection that helped change the field.

But the award wasn’t the only honor that the ABS bestowed on Tang-Martinez in Costa Rica. Just as significant, she was chosen to deliver the inaugural plenary Justice Equity Diversity and Inclusion – or JEDI – lecture in recognition of her longtime leadership in efforts to foster greater diversity and inclusion in the society throughout her career.

“My life goal has always been to be recognized as a respected scientist and at the same time do all that I could to effect change in terms of diversity, equity and inclusion in science,” Tang-Martinez said. “So getting both honors, in the same year especially, symbolized that I achieved that goal.”

One reason Tang-Martinez, a native of Venezuela, first found a home in the ABS was because of how welcoming and accepting it was of female scientists when she first attended the annual meeting in 1976 – the same year she completed her post-doctoral fellowship at the University of British Columbia and joined the UMSL faculty as an assistant professor. That hadn’t been the case with some other scientific organizations Tang-Martinez had encountered.

But the society, which today serves as the primary professional organization promoting education and research in the field of animal behavior in the Americas, at the time had very few other Latin American members and only three other people of color among its ranks.

Even as Tang-Martinez established herself in the field – publishing numerous articles in leading journals such as Animal Behaviour, Behavioral Ecology, the Journal of Mammalogy and the Canadian Journal of Zoology, as well as book chapters on topics such as the origins and functions of individual odors, kin recognition cues of vertebrates, and the relationship between feminism and sociobiology – she worked to make the ABS a more diverse organization.

While serving as president of the society in 1993, Tang-Martinez used her address at the annual meeting in Davis, California, to call for more efforts toward broader diversity. The next year, while serving as past president, she set up a Latin American Affairs Committee, which she would go on to co-chair.

“This society really turned around, and it became much more active,” Tang-Martinez said. “I also helped set up a fund to increase diversity, and the executive committee of the society decided to use that fund to subsidize registrations for minorities. It’s still there, and it’s grown and it’s now part of our budget.”

She was also a voice pushing for the society to hold its annual meeting in Latin America, something it did for the first time when the conference was in Mexico in 2004. It’s since been held in Brazil and Costa Rica.

Tang-Martinez credits her own unique upbringing for teaching her the value of diversity and inclusion, something she outlined in her JEDI lecture, which she titled “My Improbable Journey: Life Experiences As A Foundation For Opening Doors to the ‘Others’ and Challenging Scientific Paradigms.”

Nothing about that upbringing predicted her eventual career as a scientist.

Neither of her parents graduated from high school. Her Venezuelan father ­– who’d been adopted as a baby by a Chinese Venezuelan immigrant – had spent two years in Trinidad as a child and learned English, which proved valuable when American oil companies operating in Venezuela were looking for translators. He landed a job with one in the mid 1930s and was among the few Venezuelans living in a camp set up by the company specifically for American employees. That’s where Tang-Martinez was born.

Her father showed an aptitude for mathematics, so the oil company sent him to Tulsa, Oklahoma, for two years to get training in accounting. Tang-Martinez was 7 at the time and began to learn English.

When the family returned to Venezuela, she began attending school with the children of Americans, learning U.S. history and following a typical American curriculum, in addition to further education in English. So while she, her parents and two younger sisters kept a traditional Venezuelan home, speaking Spanish with each other, she made American friends from a variety of backgrounds. It helped expose her to different cultures and gave her an appreciation for their similarities and separate strengths.

The American school only went till eighth grade, and because it had a different curriculum than the Venezuelan school system, she would have had to go back two grades had she transferred.

Instead, her parents decided she should got to the United States to continue her studies, and she ended up enrolling at Academy of the Holy Names, an all-girls high school in Tampa, Florida.

“I remember distinctly my father telling me that it was going to be really hard, I was going to be in a boarding school and there were going to be long periods where I wouldn’t see them, but this was really important,” Tang-Martinez said. “If I did that, I could come back to Venezuela after finishing high school and, because I was fluent in English, I would be able to get a job with the American oil company, probably as a receptionist, and I would have it made for the rest of my life.”

Tang-Martinez’s life wound up taking a different turn. She got called to the high school office during her final year, and met several of the nuns running the school. They asked her what she wanted to be. She’d developed an affinity for biology, so she told them she wasn’t certain but thought she’d like to be a doctor.

A couple of months later, she got called to the office again, and the nuns told her they’d found a Catholic university in St. Louis, Missouri, with a medical school she could attend after completing her undergraduate coursework. They had even gone to the trouble of submitting an application on her behalf, and she’d been accepted.

Tang-Martinez enrolled at Saint Louis University in 1963 and majored in biology, but rather than going to medical school after graduation in 1967, she headed to the University of California, Berkeley to pursue a PhD.

Her time in California also gave her lessons in politics and activism, as it coincided with a period of strong opposition to the Vietnam War and the ongoing fight for civil rights. That no doubt contributed to her passion for social justice and perhaps also her willingness to challenge conventional thinking in science throughout her career.

“I realize that I’ve made important contributions to the field, but a very long time ago, I decided that I didn’t want science to be the only thing in my life,” Tang-Martinez said. “I wasn’t going to be among those people who killed themselves to get more and more papers published – that family also was important, my political work was important. So I tried to balance that.”

Tang-Martinez has remained active in the Department of Biology and continued working as a researcher even after retiring as a Founders professor in 2014. She remains active in the Animal Behavior Society, serving as Historian and as a member of its Executive Committee until earlier this year. She’s also volunteered her time with the Alzheimer’s Association and, until recently, served as a commissioner with the St. Louis County Older Adult Commission. She was recognized as the UMSL Faculty Retiree of the Year at this year’s State of the University Address and Faculty and Staff Recognition Ceremony.