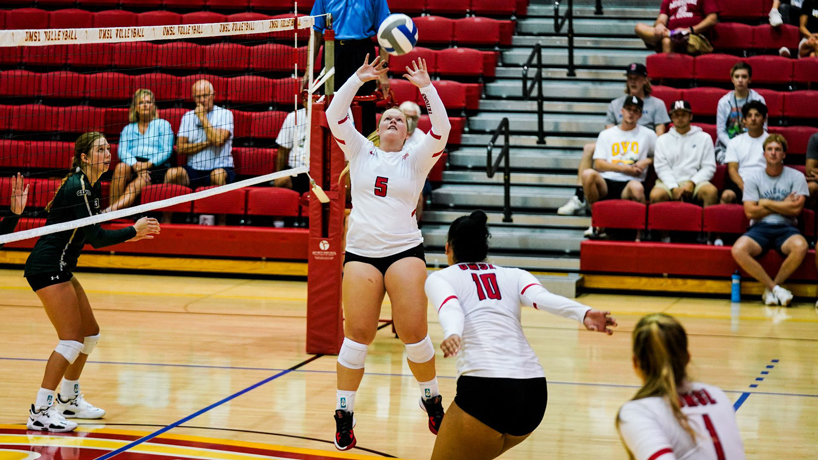 Volleyball
The University of Missouri–St. Louis volleyball team stretched its winning streak to a season-best six matches by beating Drury and Missouri S&T in straight sets over the weekend at the Mark Twain Athletic Center. The Tritons beat the Panthers 25-17, 25-17, 25-8 on Friday before dispatching of the Miners 25-13, 25-22, 25-19 on Saturday. All-American outside hitter Charlotte Richards led the way in both matches with a combined 32 kills. Freshman setter Caitlin Bishop totaled 69 assists. Freshman middle blocker Hannah Copeland had 11 blocks, and junior libero Kylie Adams added 30 digs, 19 of them against Missouri S&T. UMSL improved to 14-4, including 7-1 against Great Lakes Valley Conference competition, and will next play in the Midwest Region Volleyball Crossover on Friday and Saturday in Hammond, Indiana.

Women’s golf
Sophomore Tove Brunell set a school and course record with a final-round 8-under-par 64 last Tuesday to lead the 18th-ranked Tritons to a fourth-place finish in the Beall Fall Classic at the Findlay Country Club in Findlay, Ohio. Brunell finished second in the tournament with a combined score of 211 and earned her second GLVC Player of the Week honor. She helped UMSL post a team score of 910 to finish 12 shots back of tournament winner Grand Valley State. Wilma Zanderau finished in a tie for fourth individually with a total of 221, and Victoria Klausner tied for 20th with a total of 234. The Tritons are hosting the hosting the National Preview on Monday and Tuesday at Fox Run Golf Club in Eureka, Missouri.

Men’s golf
No. 13 UMSL finished in second place, four shots behind winner McKendree, in the Midwest Regional tournament held last Monday and Tuesday at Panther Creek Country Club in Springfield, Illinois. The Tritons finished with a team scored of 862. Senior Joel Sylven led the Tritons team with a two-day total of 215 to tie for sixth, though he was topped by freshman teammate Leo Baudry, who tied for fourth with a score of 212 while competing as an individual. Nick Hedberg finished the tournament in a tie for 13th with a total of 218. Zach Unnerstall, Ian McCrary, Juan Antonio Padilla, Brandon Dimemmo and Cyril Henault also place in the top 20 with Unnerstall and Dimemmo competing as individuals. UMSL will conclude the fall portion of its schedule on Oct. 24 and 25 at the Matt Dyas Invitational, hosted by the University of West Georgia at the Oak Mountain Golf Club in Carrollton, Georgia.

Women’s Soccer
The Tritons managed a 1-1 tie against Drury on Saturday in Springfield, Missouri, after falling 3-2 against Missouri S&T on Friday in Rolla, Missouri. Seniors Cammie Robinson and Jalyn Richardson both had goals against the Miners, but the UMSL couldn’t contain Missouri S&T graduate student Ally Hasken, who scored all three of her team’s goals, including the game-winner in the 61st minute. Junior Casey Clark scored her first goal of the season in the sixth minute of Sunday’s tie, but Drury answered about eight minutes later. The Tritons (5-6-2, 3-4-2 GLVC) outshot the Panthers 21-9. UMSL’s lone game this week will be at Maryville on Friday.

Men’s Soccer
UMSL dropped back-to-back games against Missouri S&T and Drury, losing 4-1 against the Miners on Friday in Rolla, Missouri, and falling 2-1 against the Panthers on Sunday in Springfield, Missouri. The Tritons found themselves in a 2-0 hole in the 15 minutes on Friday. Senior Arman Kovac notched his fifth goal of the season in the 56th minute to make the score 2-1, but UMSL got no closer. Senior Leo Sowa scored UMSL’s only goal – his sixth of the season – against Drury, but UMSL was outshot 17-8. The Tritons (4-7-2, 3-5-1 GLVC) will take on Maryville on the road Friday afternoon in their only match of the week.

Women’s Tennis
The Tritons beat Missouri Baptist 6-1 in its home opener last Friday at the UMSL Tennis Courts. UMSL (2-0) won all seven matches in the dual that were contested but defaulted at No. 3 doubles and No. 6 singles. Anna Domingo, Anna Favaron, Maja Lietzau and Hannah Tse all went 2-0 in the match. The Tritons are idle until February, when they open the spring schedule at home against Eastern Illinois on Feb. 3.

Men’s Tennis
UMSL picked up its first victory of the season on Friday, edging Missouri Baptist 4-3 at the UMSL Tennis Courts. Juan Vigil, Jose Mayorga and Joshua Mackey all went 2-0 in the dual with Vigil rallying after dropping the first set at No. 1 singles. The victory wrapped up the fall schedule for the Tritons (1-1). They’ll next meet Purdue Northwest on February 5 in Hammond, Indiana.

Men’s and women’s cross country
The men’s and women’s cross country teams ran in the Lucian Rosa Invitational last Saturday in Parkside, Wisconsin. Junior Benjamin VandenBrink helped the men to a 10th-place finish by placing 10th individually with a time of 25 minutes, 32.94 seconds in the 8-kilometer course. The women’s team finished 12th and were led by junior Kayley Heeter, who posted a time of 24:29.85 in the 6-kilometer race. Both teams will next race in the D2 Showcase on Oct. 22 in Huntsville, Alabama.