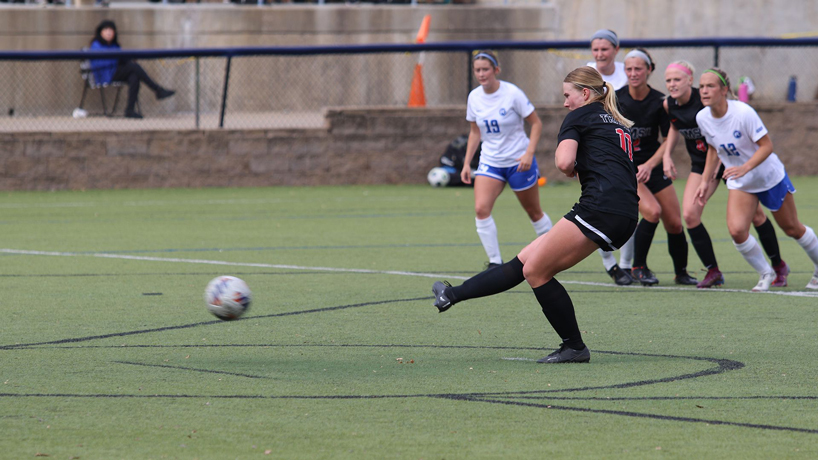 Candice Parziani fires a penalty kick toward the goal in the first half of Sunday’s Great Lakes Valley Conference Tournament quarterfinal against Rockhurst. Parziani’s goal proved decisive in the Tritons’ 2-1 upset of the top-seeded Hawks. (Photo by Luke Rinne)

Women’s Soccer
For the second season in a row, the University of Missouri–St. Louis women’s soccer team knocked off the top seed in the Great Lakes Valley Conference Tournament. The eighth-seeded Tritons stunned No. 1 seed Rockhurst 2-1 Sunday afternoon at Bourke Field in Kansas City after they beat McKendree in penalty kicks a year ago. Maya Ware got UMSL on the board in the 11th minute, and Candice Parziani added what proved to be the game-winner when she converted a penalty kick in the 22nd minute. The Tritons held the Hawks at bay until the 83rd minute when Anna Latz scored to cut the UMSL lead in half, and Rockhurst continued to attack on a day when it outshot the visitors 21-13. Tritons goalkeeper Paige Schwartz made seven saves, and the team withstood three corner kicks without surrendering a shot on goal in the final minute. UMSL (6-6-5) will take on fifth-seeded Illinois Springfield in the semifinal round on Friday at McKendree. The Prairie Stars advanced to the semifinals after beating fourth-seeded Lewis 1-0 on Sunday and also won this season’s lone meeting against UMSL 1-0 on Sept. 18.

Men’s Golf
The 14th-ranked Tritons wrapped up their fall schedule with a second-place showing at the Matt Dyas Invitational at Oak Mountain Golf Club in Carrollton, Georgia. The Tritons finished with a combined 54-hole score of 895, seven back of tournament winner Union University in Tennessee. Leo Baudry led UMSL with a three-round total of 222, good for seventh place. Three other Tritons cracked the top 20 with Joel Sylven tying for eighth with a score of 223, Ian McCrary tying for 12th at 226 and Juan Antonio Padilla tying for 20th at 229.

Volleyball
UMSL ran its winning streak to five matches and locked up a top-two seed in the GLVC Tournament after beating McKendree 25-11, 25-21, 25-18 on Friday and Indianapolis 25-21, 25-19, 18-25, 25-18 on Saturday on the road. Charlotte Richards, Lexie Rang and Hailey Flowers combined for 32 kills against McKendree, and Rang had 14 kills to pace the Tritons against the Greyhounds. Mya Elliott added 14 kills and five blocks in Saturday’s victory. UMSL wraps up its regular season at home Saturday afternoon against Lewis, and the GLVC Tournament is scheduled to begin on Nov. 10 in East Peoria, Illinois.

Men’s and Women’s Swimming
The Tritons swimming teams combined to win 16 events as they swept their dual meets against William Jewell on Saturday afternoon in Liberty, Missouri. The women’s team won by a score of 138-66, and the men’s team won 12-82. The quartet of Kate Nelson, Zara Konstapel, Kristen Stalder and Ava Boehning set a Kresge Pool record with a time of 4 minutes, 31.24 in the 400-yard medley relay to open the meet. Sarah Nelson was apart of three event wins as she won the 100 free (1:01.04), the 200 free (2:13.46) and swam the third leg of the winning 400 free relay squad. The men’s team of Guillem Masjuan Roca, Austin Stevenson, Conley Savage and Aiden Clark also set a pool record in the 400 medley relay with a time of 3:51.41. Stevenson, Masjuan Roca and Savage were all dual winners with victories in the 50 free, 200 individual medley and 200 butterfly, respectively. UMSL will return to the pool in the University of Chicago Phoenix Fall Invitational, a three-day event that begins Nov. 18.

Men’s Basketball
An UMSL roster full of newcomers got their first taste of competition together in an exhibition game against Saint Louis University last Monday at Chaifetz Arena. The Division I Billikens, picked to finish second in the Atlantic 10 Conference, won 81-58 as the Tritons struggled offensively. They shot only 8 for 31 (25.8%) in the opening half as they fell behind 47-24. The two teams played even after intermission, and UMSL redshirt junior guard Isaiah Fuller finished with a team-high 12 points. Newcomers Bowen Sandquist and Donovan Vickers finished with 11 and 10 points, respectively. Yuri Collins had 13 points and seven assists for SLU. The Tritons will open their season Nov. 11 against Walsh at the GLVC/Great Midwest Athletic Conference Crossover in North Canton, Ohio.