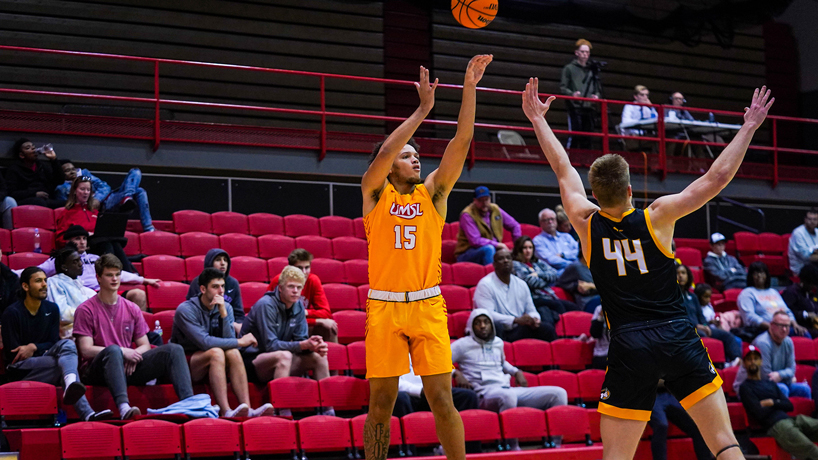 Junior forward Mayson Quartlebaum helped shoot UMSL to a victory over Missouri S&T with 16 points, including a pair of 3-pointers, on Saturday. The 18th-ranked Tritons improved to 8-0 on the season. (Photo by Patrick Clark/Athlete’s Eye Photography)

Men’s Basketball
The University of Missouri–St. Louis men’s basketball team continued its blistering start by opening up Great Lakes Valley Conference play with a 70-65 victory over previously unbeaten and 22nd-ranked Southwest Baptist last Monday. It followed that up with home wins against Drury (86-63) on Thursday and Missouri S&T (76-67) on Saturday. The Tritons (8-0, 3-0 GLVC) have moved up to No. 18 in the national rankings. Redshirt junior guard Isaiah Fuller averaged 20 points in three victories, including a career-high 31 points against Drury. He had a team-high 16 points against Southwest Baptist in a game that UMSL never trailed. The Tritons overcame an eight-point second-half deficit to beat Missouri S&T on a day when five players finished in double figures. Forward Mayson Quartlebaum had a team-best 16 points, and forward Janeir Harris added 16 points off the bench. UMSL will play host to Lewis on Saturday in its only game of the week.

Women’s Basketball
The Tritons won their GLVC opener at Southwest Baptist 51-46 last Monday but stumbled at home in back-to-back losses to Drury (72-55) and Missouri S&T (58-48) on Thursday and Saturday, respectively. Sophomore guard Jalysa Stokes led UMSL to the victory in Bolivar, Missouri, with 21 points, and freshman guard Morgan Ramthun added 10 on a day when the Tritons held Southwest Baptist to 34.7% shooting. UMSL was undone by 21 turnovers against Drury and shot just 35.8% from the field against Missouri S&T. Ramthun led the Tritons in scoring in both losses, averaging 15 points. UMSL (2-5, 1-2 GLVC) will play Division I Illinois State in an exhibition game on Tuesday in Bloomington, Illinois, and it will face Lewis on Saturday at the Mark Twain Athletic Center.