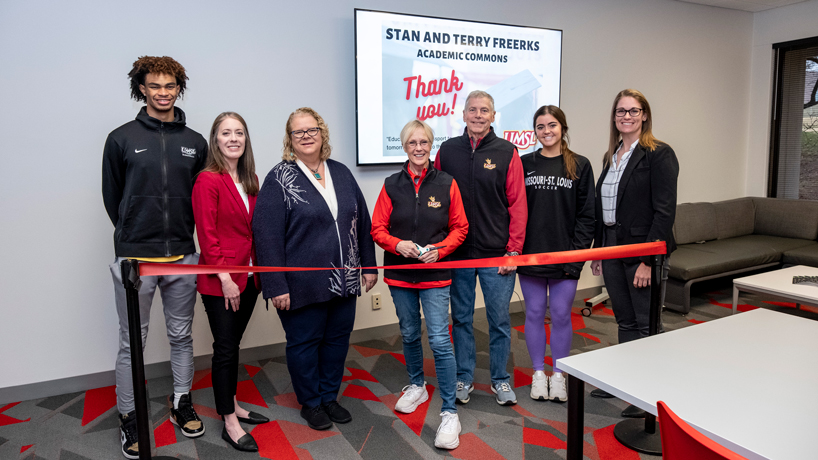 Chancellor Kristin Sobolik (third from left) and Terry and Stan Freerks (fourth and fifth from left) cut the ribbon last week during a ceremony at the new Student-Athlete Academic Commons in the Mark Twain Athletic Center. Thanks to a generous financial donation from the Freerks, the space was overhauled during the 2021-22 school year. New upgrades include a variety of seating options as well as new carpet, lighting, window treatments and custom wall decals. (Photo by August Jennewein)

About a year and a half ago, Lori Flanagan began contemplating the Student-Athlete Academic Commons in the Mark Twain Athletic Center.

Flanagan, director of athletics at the University of Missouri–St. Louis, wondered how the study and advising space could continue to accommodate an ever-growing athletic department.

In recent years, men’s and women’s swimming as well as cross country and track and field programs returned to campus, and the number of student-athletes in the department has swelled to about 270. Yet the Student-Athlete Academic Commons only provided enough space for 29 people to study comfortably at a time.

It became clear to Flanagan that an upgrade was greatly needed.

Conversations between Flanagan, members of the UMSL Advancement team and Stan and Terry Freerks – UMSL Distinguished Alumni Award winners and avid university boosters – brought that goal to fruition. Flanagan explained the need to expand and enhance the space for the benefit of UMSL student-athletes, and after hearing about the proposed upgrade, the Freerks were immediately willing to help in any way possible. 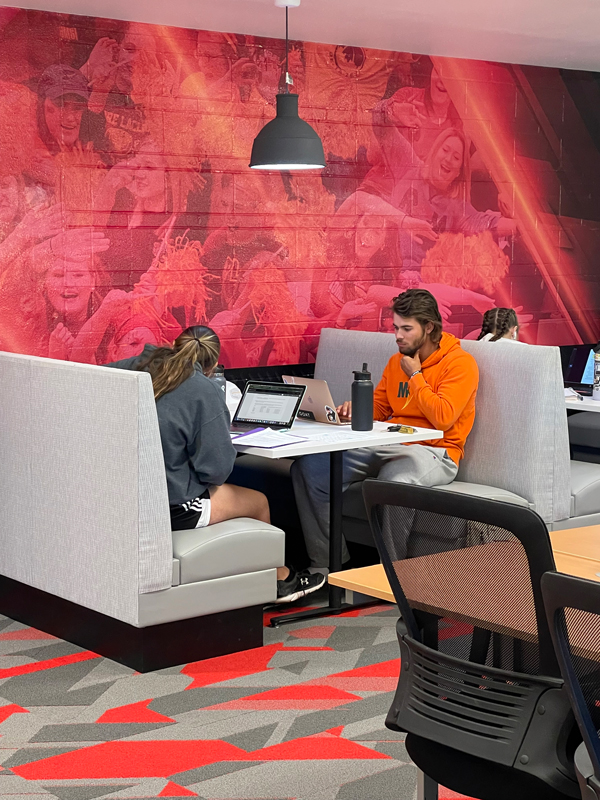 Thanks to a generous financial donation from the couple, the space was overhauled during the 2021-22 school year and ready for use at the beginning of the fall semester.

As former collegiate swimmers – Terry at Arizona State University and Stan at Cornell University – the Freerks are well aware of the commitment it takes to succeed in the gym and in the classroom. It’s a fine line to walk, but they understand that doing so develops character and life skills.

“We know what it means to be a student and an athlete at the same time,” Terry Freerks said. “There are a tremendous amount of demands on your time. You have to be disciplined; you have to be committed; you have to have a lot of follow-through. So, this project was one that we felt strongly about because it helped the athletes address the academic side of their responsibilities.”

Flanagan and Lindsay Pickering, assistant director of athletics for academics, noted that preparation for a career beyond sports is a pillar of UMSL Athletics.

“Obviously, the academic component has to be the first and foremost thing that we take care of,” Flanagan said. “That’s the end result in what we do – to get these kids a degree.”

This past school year, a record 158 student-athletes achieved Academic All-GLVC accolades with a cumulative grade point of 3.3 or higher. Additionally, the overall grade point average of UMSL’s 19 teams was 3.4, marking the 19th consecutive semester above 3.0. The university also has an 85% success rate graduating student-athletes.

Pickering believes the renovated Student-Athlete Academic Commons will help continue that trajectory. The space has gone from what amounted to a spare classroom in Mark Twain to a thoroughly modern and spacious studying environment. A wall was taken down to enlarge its footprint, and it can now accommodate more than 50 student-athletes at one time.

In redesigning the space, Flanagan and Pickering thought about where students like to study and what those places look like. The two biggest influences in that regard were the University Libraries and coffee shops such as Starbucks and Kaldi’s.

With that in mind, the area provides a variety of seating options for student-athletes to spread out, including booths, couches, chairs, individual desks and tables. Pickering said the mixed seating has made the space feel more comfortable and inviting. She added that the booths and tables are particularly popular and have fostered a collaborative atmosphere where people can work individually but are also empowered to seek help from friends and teammates.

“Knowing that they have a safe, comfortable, relaxing, disciplined environment to go to and be very structured with academics, that is a plus for a lot of students,” Flanagan said.

“The other really big thing that seems minimal was additional outlets in the room,” Pickering said. “If you think about an old classroom, it maybe had an outlet on each wall. Well, when you have up to 30 or 35 students studying, they need somewhere to plug in a laptop.”

Pickering’s office is located in the Student-Athlete Academic Commons, and she’s been able to observe the positive response among student-athletes. 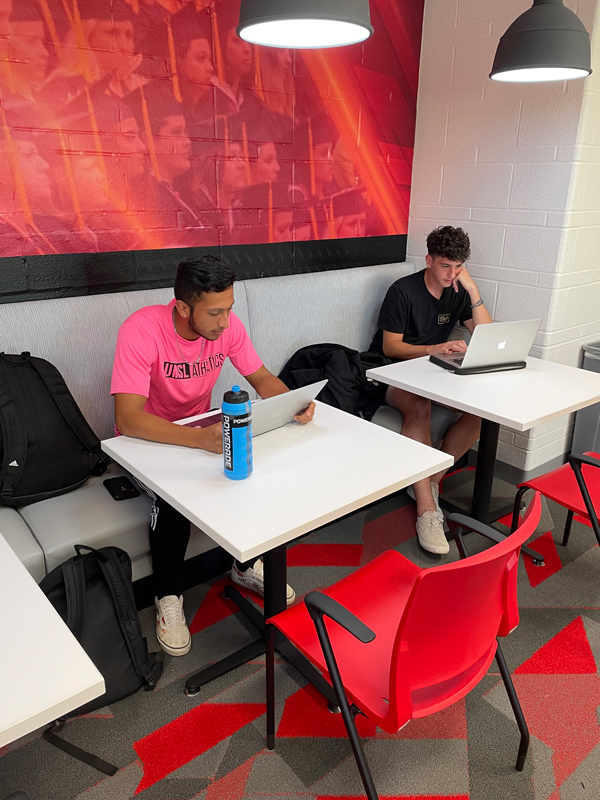 Upgrades to the new space include a variety of seating options and custom wall decals. (Photo courtesy of Lindsay Pickering)

The convenience of those amenities is especially important for those transitioning to UMSL from high school and junior college – a difficult task for any student.

“It’s the decision-making, and that time management piece that they kind of struggle to pick up along the way,” Pickering said. “That’s a key use for this room and the structure that we provide for them as they transition and the additional support that we have for them.”

Overall, Flanagan, Pickering and the Freerks are all pleased with the final product.

“We think it’s absolutely beautiful,” Terry Freerks said. “We were able to peek in, and there were student-athletes in there studying. It’s doing exactly what we hoped it would – exactly Lori’s vision for it. They figured it out. They knew what they needed, and we were just happy to be able to support it.”

Pickering expects it to be an important asset for the athletic department’s continued success and growth.

“I definitely think it helps with recruitment to show how serious our department is about academics,” Pickering said. “They’re student-athletes, and the student part is going to be key for their success. At some point, their athletic career ends, and it’s our job to make sure that that degree is coming so that they can go on and do what they want to do for the rest of life.”