Joel Sylven had gone looking for a cup of water to clear his throat one August morning inside the Mark Twain Athletic Center at the University of Missouri–St. Louis. A familiar face spotted the lanky, blonde 6-foot-2 golfer near the lobby a couple days before the start of the fall semester.

“Is that the na-tion-al cham-pion?” the young woman said in an exaggerated voice.

Sylven smiled sheepishly and continued, cup in hand, on his way.

He’d had about three months to get used to that kind of recognition around campus or when practicing at nearby Glen Echo Country Club or Norwood Hills Country Club, but he still wasn’t quite comfortable with it.

Sylven had been laser-focused that day last May at TPC Michigan when, playing through steady rain and unseasonably cool temperatures, he rallied from two shots down and leaped over five other competitors in the final round of the NCAA Division II Men’s Golf Championship to force a playoff. 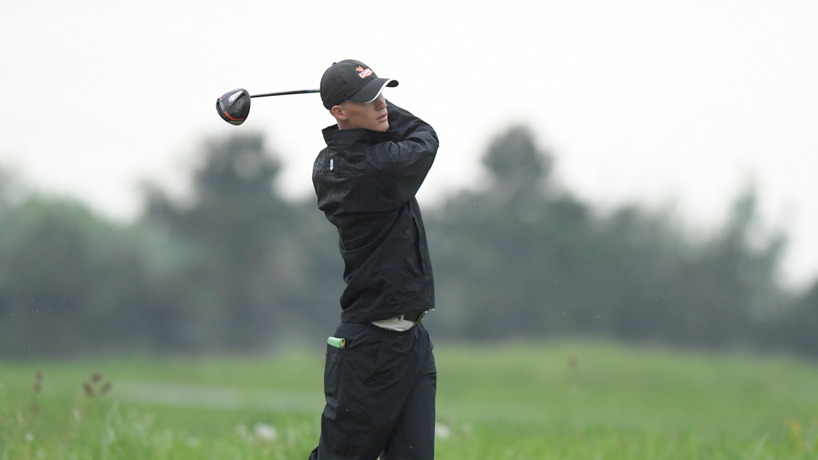 He’d waited nearly three hours after he finished to see if he’d get that showdown against Keegan Bronnenberg, the University of Indianapolis senior and defending NCAA Division II champion who, at the time, was just beginning his back nine with a two-shot lead. During his wait, it never occurred to Sylven to think about what the long-term implications of winning would be.

Instead, his attention was trained on making sure he was ready to capitalize on the opportunity. With his adrenaline pumping on the tee box at the 408-yard par-4 first hole, Sylven blasted a drive farther than he’d hit the ball there all week, leaving himself a wedge into the green. He dropped that approach about 15 feet from the hole and, with a clear advantage over Bronnenberg, rolled in the birdie putt to lock up the championship.

“It was just kind of surreal, as those kinds of moments are when you’re there,” says Coach Troy Halterman, recalling the scene.

Sylven just remembers feeling relief as the ball fell in the cup, cementing his legacy as the second national champion in school history, alongside the title-winning 1973 men’s soccer team.

“You’ve built up so much tension the whole day, really since you woke up,” Sylven says. “You don’t get put in those situations too often. I’m very happy that I reacted so well.”

His win capped off a banner year for the UMSL Department of Athletics. It also fulfilled the potential Sylven displayed early in his career, when he won two tournaments and finished second in three others to earn recognition as the 2019 Division II Phil Mickelson Outstanding Freshman of the Year.

But his career had hardly progressed in a straight line since he arrived at UMSL from Falkenberg, Sweden, following a path first blazed by compatriots Markus Lindberg and Emma Thorngren, who enjoyed their own standout golf careers as Tritons.

Sylven still managed three top-five finishes during an abbreviated sophomore season, cut short by the onset of the COVID-19 pandemic, and he picked up another victory the following fall. But his game seemed to come apart in the spring of his junior year.

“He was really struggling at the end of his junior year,” Halterman says. “I’ve never seen a kid more lost on a golf course. He had no idea where it was going and was playing afraid.” 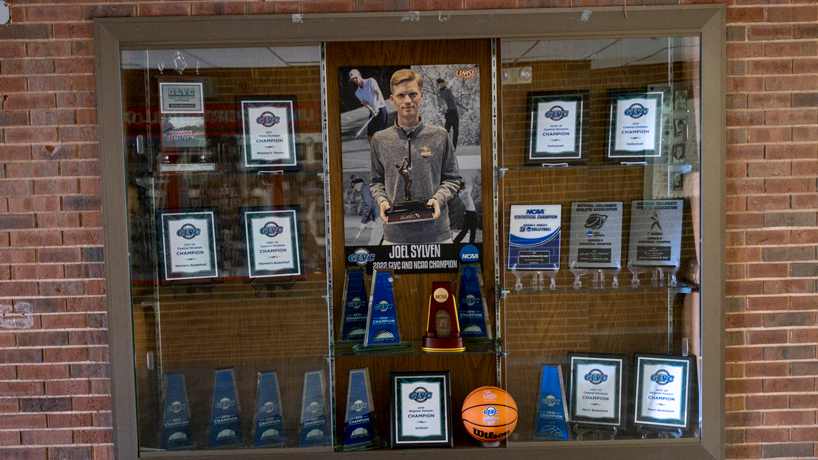 A picture of Joel Sylven rests above his national championship trophy in a case in the lobby of the Mark Twain Athletic Center. (Photo by August Jennewein)

Sylven finished tied for 43rd, failing to shoot better than 79 in any round of the Great Lakes Valley Conference Tournament, and he followed it up by placing dead last out of 86 golfers in the NCAA Division II Midwest/Central Regional.

“I didn’t know how to keep the ball in play when I got up on the block,” he says. “I was struggling really hard, just trying to do something with my swing. Then, after a while, I realized that I just needed to go back to what I did my freshman year.

After a summer grinding away to get things right, he opened the 2021-22 season with a victory at the Arch Cup, carding two rounds in the 60s and winning by five shots over his closest competitors. But Sylven says he still didn’t feel comfortable on the course.

That finally started to change as he practiced during the winter break in the schedule.

“I started seeing shots that I used to hit come back to me,” Sylven says.

The Tritons got a boost of confidence when they won against a strong field at the Las Vegas Desert Classic, and Sylven had an individual breakthrough a few weeks later playing in the Findlay Spring Invitational at the University Club of Kentucky. He shot three rounds under par on the Big Blue Course and won the tournament by two strokes.

Two and half weeks later at the GLVC Championship in Indianapolis, Sylven shot 6 under par, including a 67 in the second round, to claim medalist honors by one stroke, and he went on to help the Tritons win the team championship – UMSL’s third overall and first since 2016.

That set the stage for his historic postseason, including a tie for 11th in the regional tournament before his championship win in Dearborn, Michigan. He also helped the Tritons advance to match play with a fifth-place team finish.

Being part of a team was a big reason Sylven – a former soccer player in his youth – opted to come to the United States to play college golf. He also wasn’t sure he was quite ready to turn professional after a standout junior career in Sweden that saw him rank eighth in his age group.

After winning seven individual titles, including the NCAA Division II Championship, over the past four years, Sylven’s game has developed enough – and he’s worked through enough adversity – to give himself a chance to stick in the professional ranks.

But with the NCAA granting an extra year of eligibility to athletes whose careers were interrupted by COVID-19, he’s first spending one more season trying to add to his legacy at UMSL while also finishing his degree in sport management.

“I want to be a little bit more consistent this year,” Sylven says. “I feel like if I can stay consistent throughout the year, I don’t see why I wouldn’t be able to do even better.”