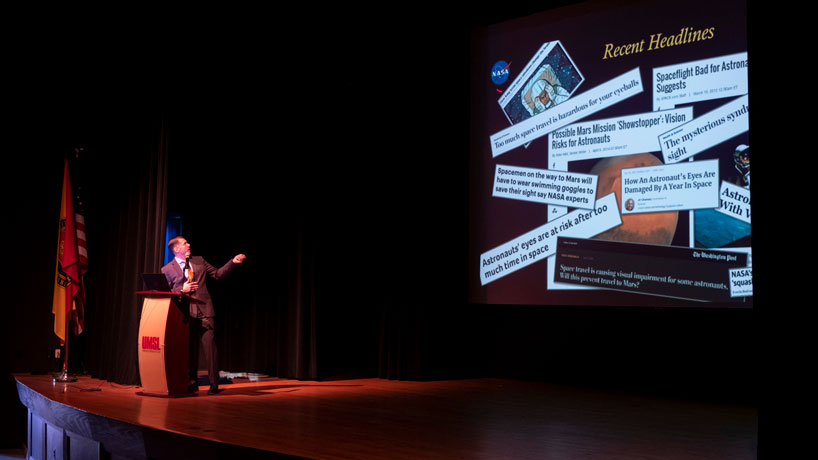 Dr. Tyson Brunsetter of NASA opened his recent lecture at UMSL by sharing a few headlines from coverage of SANS. (Photos by August Jennewein)

Will astronauts on the way to Mars really have to wear swimming goggles to save their sight or use special sleeping bags to prevent eyeball ‘squashing’ onboard the International Space Station?

Those were just a few of the questions audience members were left to ponder during a lecture from NASA’s Tyson Brunstetter inside the J.C. Penney Auditorium on the University of Missouri—St. Louis campus earlier this month.

Brunstetter, an Aerospace Optometrist and SANS specialist at the NASA Johnson Space Center in Houston, was in town to deliver a special lecture presented by the Tareq Nabhan in partnership with the Department of Computer Science and College of Arts & Sciences. Brunstetter’s lecture focused on Spaceflight Associated Neuro-ocular Syndrome (SANS) and the challenges of performing ocular telemedicine onboard the international space station.

To introduce the topic, Brunstetter shared a few headlines from coverage of SANS, including “The mysterious syndrome impairing astronauts’ sight” and “Too much space travel is hazardous for your eyeballs.” Although, as Brunstetter admitted, some of those headlines were a bit comical, they underscored the risk of SANS, which affects nearly 70% of astronauts on long-duration missions.

Most astronauts experience some changes to their eye and brain structure – collectively known as SANS – in space, with signs including optic disc edema, chorioretinal folds, globe flattening and shifts in refractive error. SANS is believed to be caused by the headward fluid shifts that occur in weightlessness, as blood and other fluid shifts toward the head. 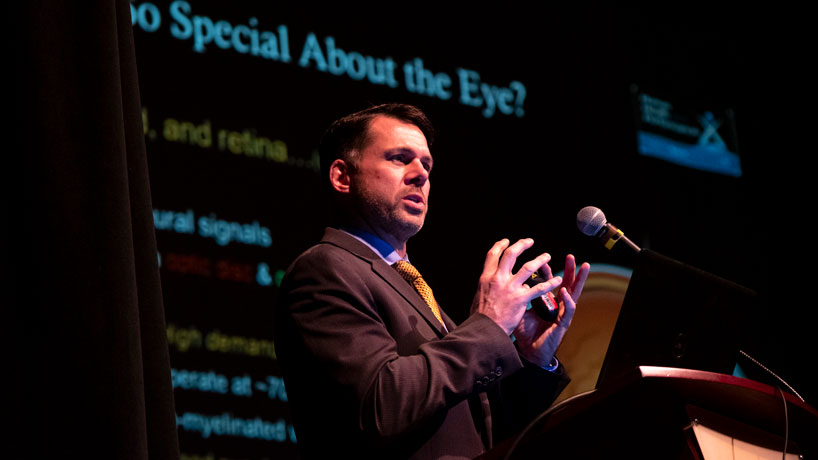 Brunstetter is an Aerospace Optometrist and SANS specialist at the NASA Johnson Space Center in Houston.

As Brunstetter explained to the audience, there is no evidence of SANS causing permanent loss of vision or cognitive function in any astronauts, but severity is thought to be related to mission duration. Experts believe that increased duration could lead to increased severity and increased risk for in-flight and long-term health consequences, such as permanent visual field defects, visual distortions or unexpectedly large refractive error shifts. With that in mind, SANS poses a significant risk to expeditionary spaceflight, such as a mission to Mars, for instance, which would take between 2½ and 3 years.

To better understand SANS, NASA is employing telemedicine – and that’s exactly why Assistant Clinical Professor Dr. Tareq Nabhan invited Brunstetter to deliver this lecture. Nabhan, who launched a cutting-edge telehealth course for third year-optometry students last year, said that there are significant ties leveraging technology to health care both for astronauts aboard the international space station and for underserved communities back on earth.

Brunstetter’s was just one of several guest lectures that Nabhan builds into his “Introduction to Telehealth” course, which explores the possibilities of tele-retinal and tele-optometry services. Nabhan, who introduced Brunstetter to the crowd on Dec. 9, believes telehealth could play a pivotal role in democratizing health care.

Before inviting Brunstetter to share the latest from NASA, he directed the audience’s attention closer to home, sharing statistics from Affinia Healthcare, which provides affordable primary and preventive health care across several locations in the St. Louis metro area and has a longstanding relationship with UMSL. Of Affinia’s patients, 92% have incomes below the 100% federal poverty line, 40% are uninsured and 10% are experiencing homelessness.

“Nobody is fighting for these patients,” Nabhan said. “These patients don’t have access to care, and we can be part of the solution.”

Part of that solution could involve leveraging the technology that NASA uses in optometry. For instance, diabetic retinopathy is the leading cause of blindness among working-age adults. Nabhan, who shared an image of a normal retina compared to a diabetic retina with the audience, explored how tele-retinal screenings could be used to detect diabetic retinopathy and, in turn, prevent blindness.

Telehealth, Nabhan said, is a “proven process,” pointing to organizations such as the Indian Health Service, Veteran Affairs and NASA that have been utilizing telehealth to reach patients for decades. During the Dec. 9 lecture, audience members were encouraged to think about how NASA’s use of telehealth could influence optometry at large, making eye care more accessible and equitable.

“Anytime NASA does something, it should come back to earth as a solution as well,” Nabhan said when the lecture was announced earlier this fall. “When you talk about astronauts, they may be thousands of miles away – you can only use technology to connect with them, right? It isn’t that different with patients in underserved areas in Rwanda. We’re trying to change the culture and mindset of the students because telehealth is so new. I can pull in the lead for eyes and vision from NASA and say, ‘How do you expect them to take care of our astronauts?’ Everybody deserves that level of care, no matter where you are.”