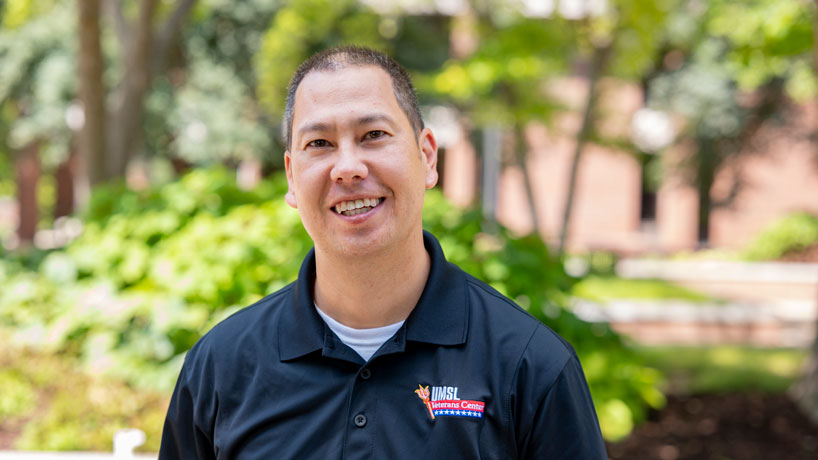 James Loehr, an Army veteran, found his calling after counseling other veterans and is now pursuing master’s degree in social work at UMSL. (Photo by August Jennewein)

Getting out of bed every morning was a challenge for James Loehr. Depression, panic attacks and feelings of anger blanketed his existence and made it difficult for him to hold down a job and engage with people.

He’d returned home after serving in the Army for eight years, with the last one spent in Iraq. He’d been working in special operations for civilian affairs, where he helped rebuild the area’s infrastructure. The Netflix film, “Sand Castle,” written by one of Loehr’s fellow unit members, Chris Roessner, depicts the team’s experience in Iraq. Loehr’s time in the military made it nearly impossible for him to return to normal life.

“It’s hard to be in the world and not sense danger from everywhere even though I knew I was in America,” Loehr said. “I didn’t live on base. I lived in the population. It was 12 of us and 40,000 Iraqis. I think if I lived on base, it would have been an easier transition. I felt that everyone around me could attack me at any time.”

After years of struggling with PTSD, depression, anxiety and even homelessness stemming from the difficulties of his time in the Army and experiencing combat in the Iraq war, Loehr has a new purpose and renewed vision for his life.

In addition to becoming a first-time dad, he’s gone back to school to pursue a Master of Social Work degree at the University of Missouri–St. Louis to help veterans and others through their trauma.

Loehr had initially joined the Army in 1997 as a reservist, figuring it could help pay for college. He was attending the University of Missouri–Columbia, but a year later, he transitioned into special operations full-time.

In 1999, he was reclassified a civilian affairs specialist and spent several tense years in Kosovo, particularly after 9/11 knowing he might be deployed to Afghanistan at any moment.

In 2003, Loehr was instead sent to Iraq, and that proved the catalyst for his downward spiral.

He and his team were tasked with helping stabilize the area, establish the livelihood of the residents and work with local public safety and medical organizations to provide resources. It was a tricky balance providing service while also attempting to avoid being viewed as aggressors in the war. During this time, the unit was also fighting “disrupters” who were contracted to fight and cause chaos.

Loehr was initially able to focus and function, even earning a Bronze Star for heroism for organizing and executing a plan to secure over $100,000 worth of medical supplies that had been stolen from the local hospital. But what he’d been exposed to in the war took a heavy toll.

“Probably four months into Iraq is when I started feeling different about humanity and the world,” Loehr said. “I was a 25-year-old that was dealing with just uncertainty. I was introduced to the depths of evil in the world.”

Iraq was Loehr’s last deployment. He decided he was ready to become a civilian again and left the Army. He returned to school in Columbia to continue his undergraduate studies, which would prove to be difficult.

Protestors of the Iraq war on campus made Loehr anxious, feeling at times that their messages were directed at him. Though he was no longer in the military, it felt as if reminders of his experience in Iraq were ever-present.

Loehr talked with an advisor who helped him review his credits and realize he could graduate sooner with a general studies degree. This was aided by the fact he’d entered college as a sophomore due to college courses he took in high school.

After graduating, he went back home to St. Louis to find a job and begin the rest of his life, but he again faced obstacles trying to find a job.

Some employers rejected him because they mistakenly thought he’d be deployed again. Others felt he was overqualified, questioned his mental stability or couldn’t understand how his leadership responsibilities in the military translated to a traditional job. He also thought he might be facing discrimination as someone who is part Korean.

Loehr’s frustration was escalating. He had re-entered civilian life, as many veterans, with unaddressed mental and emotional challenges – and without support. In addition to his already existing PTSD, depression and anxiety, a seething anger was building about his limited options.

He said he “ghosted’ his family and headed for California, where he couch surfed at different friends’ homes and even camped out in national parks where veterans were able to stay for free. He was going downhill fast, losing hope and drinking, sometimes to the point of blacking out.

Eventually Loehr was able to get an executive management role at Target in security. Over time, as some of the pressures of the job sank in, it became apparent that he was still grappling with mental health challenges and anger.

It was a Vietnam veteran named Bob, who helped Loehr get help, introducing him to a Veterans Affairs support group. It made him feel less isolated as he worked through his challenges.

“It wasn’t until I went to group therapy with Vietnam veterans that I felt like ‘Okay, I’m not alone in my struggle,’” Loehr said.

The assistance he received at the VA helped him not only begin his recovery but also renewed his faith, which was a big feat.

Eventually, Loehr came back to Missouri and worked a number of jobs until he finally returned to St. Louis and reconnected with his family. He then got a role as an executive director of a church, where he began counseling other veterans and also connected with the St. Charles Legion Post 312. Members there convinced him to work for the local VA.

Loehr took them up on the suggestion and got a volunteer role at the VA at Jefferson Barracks as a peer support specialist offering counsel to Vietnam veterans. That opportunity gave Loehr’s life meaning again. He was later hired and continued supporting over 200 veterans.

One example of why the work with veterans became so important was when Loehr helped a Vietnam veteran who’d been unhoused for 37 years and incorrectly listed as deceased. He helped the man re-establish his identity, get back pay for all the disability payments and secure housing.

Loehr kept up the work while moving to Phoenix for several years. He was slated to be transferred from Arizona back to St. Louis in 2020, but the opportunity fell through and left him without immediate options. So in the spring of 2021, he decided to return to school.

“My life has been challenging, but I’m doing great, despite all these circumstances,” Loehr said. “But the silver lining is that’s when I decided to come to UMSL. I was like, ‘If I can’t go back to federal employment, I might as well get my degree.’ As a peer counselor, I hit the ceiling so I couldn’t be promoted anymore. So the next step was to get my master’s in social work so I can go back to the work I was doing and have no ceiling.”

The experience at UMSL has been positive and reinforces Loehr’s vision for his life.

“UMSL social work professors have given me another level of understanding about what I’m capable of and what I’m going to be able to achieve.”

For his next steps, Loehr is looking forward to his first practicum, which will be at St. Louis Counseling at the St. Charles site, helping him further prepare for his career.

“It is the encouragement of all the social workers in my life that helped me understand I am on the pathway that I need to be,” Loehr said. “This will be the vehicle that I can make the biggest impact in people’s lives.”