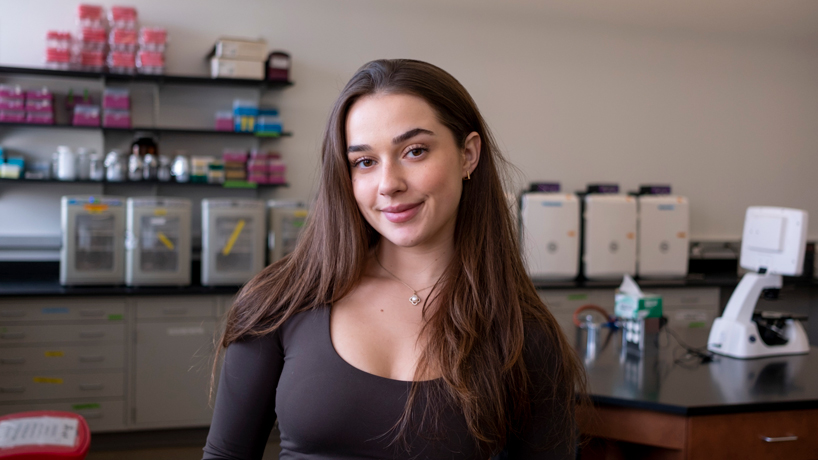 Christina Karam traces her interest in medicine to the 10 years of her life she spent in Beirut.

“There are high rates of poverty over there, and I’ve always wanted to help,” said Karam, who spent a lot of her free time volunteering as a teenager. “I know a lot of people need medical attention, but I knew that I couldn’t do that without a degree. That definitely inspired me to go into the medical field.” 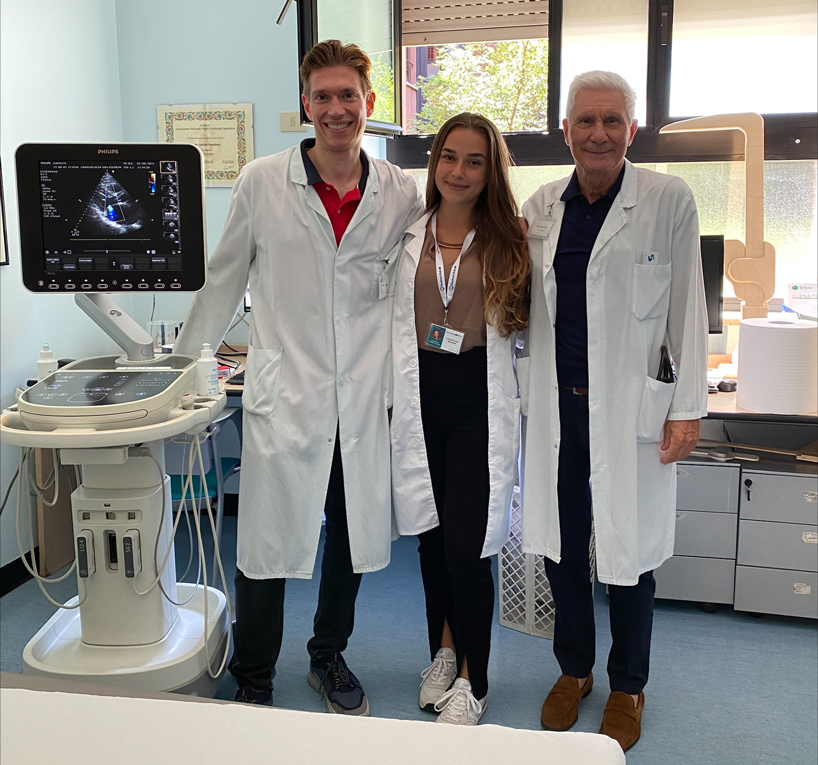 Christina Karam spent four weeks in Milan participating in the Doctors in Italy Fellowship Program, and she had the opportunity to shadow different specialists, including Drs. Sonaglioni and Lombardo. (Photo courtesy of Christina Karam)

Karam started working toward that end as an undergraduate student at the American University of Beirut, but anti-government protests spurred on by high inflation in Lebanon disrupted her academic pursuits, suspending classes for weeks at a time and making it challenging just to travel to campus. That’s what led Karam back to St. Louis – the place she was born – to continue her academic journey at the University of Missouri–St. Louis.

Karam is grateful to the university, especially its faculty and fellow students, for helping her overcome the trauma she experienced in Lebanon and the isolation she encountered early on in her time back in St. Louis.

To Lebanon and back

Karam’s parents met in Ohio. That’s where her mother is from, but her father is Lebanese.

They moved together to Missouri because of work as they were beginning to grow their family, and Karam spent the first 10 years of her life in St. Louis.

She has good memories from her early childhood in the Midwest and continued visiting every summer after the family relocated to Beirut. But she also came to enjoy living abroad and the unique culture of Lebanon.

Karam was a standout student at Sagesse High School, one of the top international schools in Beirut. She was class president for three years, played volleyball and soccer, was a member of the Spanish and Arabic Clubs and graduated as her class’s valedictorian.

Then it was on to the American University of Beirut. Karam started there in August of 2018 and began taking courses to major in environmental health science.

Lebanon has a long history of turmoil, with a civil war that raged from 1975 to 1990 and many subsequent conflicts, including border clashes with its southern neighbor, Israel, and spillover from the Syrian Civil War to its east.

But it has been an economic crisis that has caused the most hardship for its citizens in recent years with Lebanon’s GDP plummeting from close to $55 billion in 2018 to an estimated $33 billion in 2020.

Those circumstances sparked a period of protests that eventually led to violence, right as Karam was trying to carry on her studies.

“Demonstrators took to the streets, blocking roads with burning tires,” Karam wrote while reflecting on her experience in the Center for Teaching and Learning newsletter last fall. “On top of that, there was – and still is – a gas shortage. My biggest challenge no longer had anything to do with my university – but how to get to campus.”

The situation became so untenable and unsafe that Karam made the decision to leave Lebanon and continue college in St. Louis.

Karam didn’t expect to end up at UMSL. Before leaving Lebanon, she’d applied and been accepted to another area university, but when she arrived on campus for new student orientation, she learned that none of the credits she earned in Beirut would transfer. 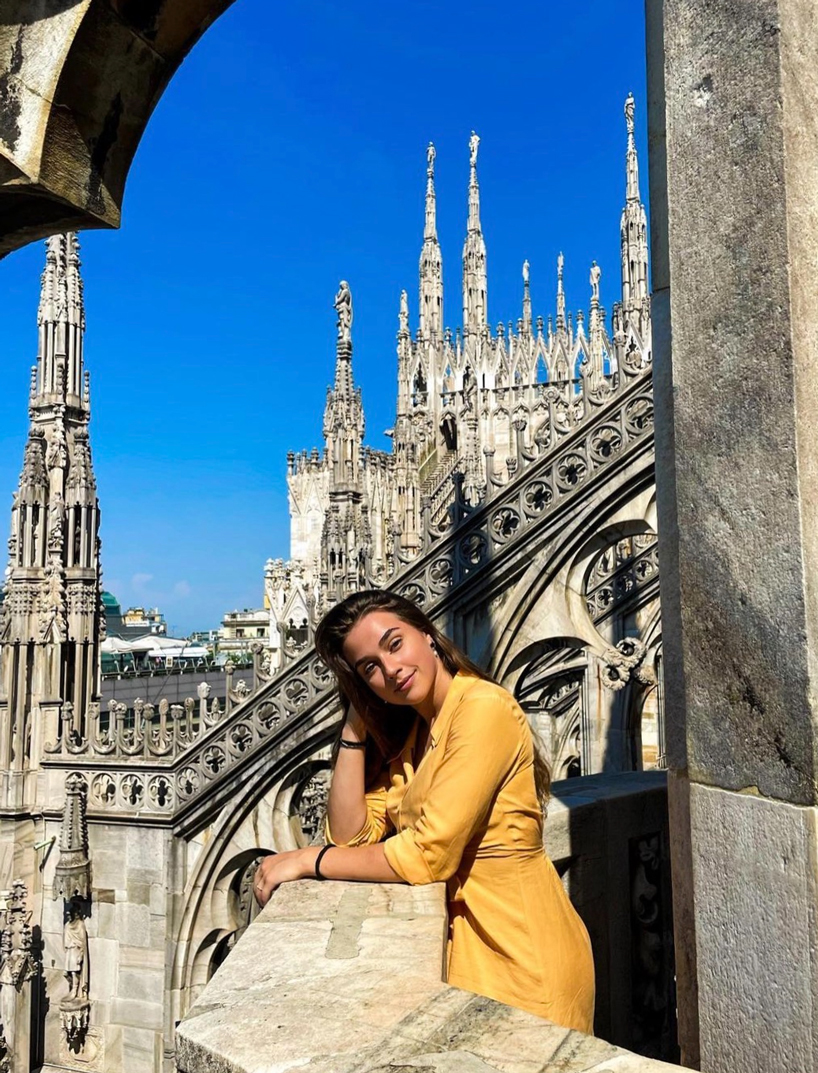 Still, it was unnerving to have her plans thrown into disarray. As she was trying to sort out what to do next, her dad suggested she look into UMSL.

Karam went to take a campus tour with her mother and was struck by how friendly everyone she encountered was. She filled out her application the same day and soon after received her acceptance.

All but one of her credits ended up transferring, but they were still being processed when she met with an advisor to register for classes after declaring biology as her major. He simply asked her what courses she’d already taken in Beirut and figured out the appropriate next steps.

“I’m thankful they were making it easy on me,” Karam said. “It felt like the right decision because it was just so smooth.”

Karam had the misfortune of starting at UMSL in the spring semester of 2020. Less than two months after starting classes – as she was still learning to navigate her way around and make friends – the onset of the COVID-19 pandemic abruptly shut down campus and pushed classes online.

It was a harrowing time for many people, including Karam. In her reflection for the Center for Teaching and Learning newsletter, she wrote about the anxiety, the lack of sleep and the building stress upon her educational career.

After a few months, Karam finally sought out a therapist to help her address her mental health and well-being.

She also benefitted from care and acknowledgement from one of her professors, Jennifer Nolan, an associate teaching professor in the Department of History.

“Christina was a standout student in my anthropology and gender studies courses,” Nolan said. “Her professionalism and enthusiasm for the subject matter was exceptional. I asked if she would consider applying for the Active Learning Assistant position.”

The program is designed to help faculty develop engaging, collaborative and student-centered learning environments. ALAs are undergraduate students, and they meet weekly with their faculty members to prepare classroom activities that promote active learning.

Just being asked to be part of the program was a big deal for Karam. She’d grown accustomed to being little more than a number in 300-person or more lecture hall classes in Beirut, but she felt seen and appreciated in a way she hadn’t been before. It was an easy decision to follow through with the application process.

“When I first interviewed Christina for an Active Learning Assistant position, I was immediately impressed by her enthusiasm and passion for learning,” said Jennafer Alexander, who coordinates the program as the assistant director for Student Support Programming in the Center for Teaching and Learning. “I offered her the position, and Christina served as an ALA in Professor Jennifer Nolan’s anthropology courses for three semesters.”

“She was always readily available to meet with students, expressing a warm and open-minded attitude that fostered trust and community within our classes,” Nolan said.

Karam got just as much out of those interactions as the students she was helping.

“I wouldn’t have had the same experience at UMSL if I hadn’t had the ALA program,” she said. “It provided me with friends and a community to feel comfortable. It also gave me a different sense of how education and academia work. It really made me see how much work and time professors put into their courses, and the professors here really do want you to succeed.”

A cultural and medical immersion

The ALA program wasn’t the only thing that has made Karam’s experience the past two years so memorable. She also spent an unforgettable month in Milan last summer through the Doctors in Italy Fellowship Program. 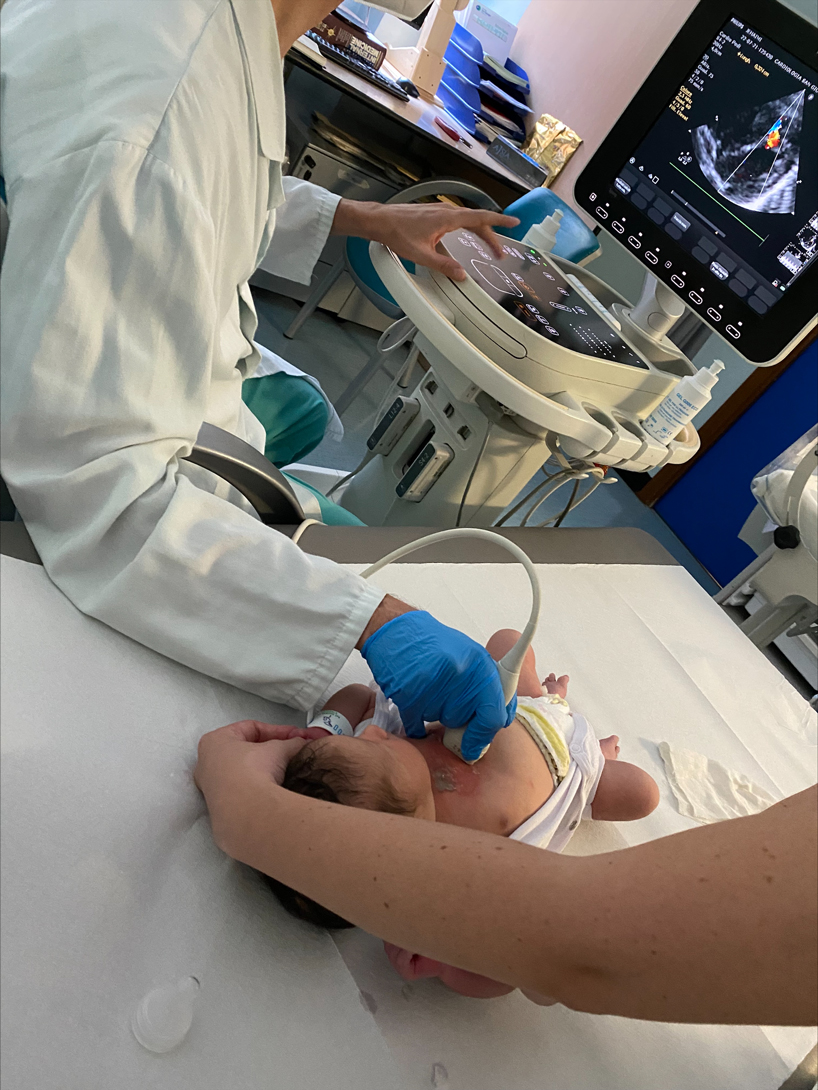 Christina Karam holds the hand of a newborn undergoing an electrocardiogram as part of her experience in the Doctors in Italy Fellowship Program. (Photo courtesy of Christina Karam)

The program attracts college students from across the country and helps them spend at least two weeks and as many as five shadowing doctors in clinical settings. The program offers opportunities in Milan, Rome, Genoa, Florence or Bologna, and participants get to shadow specialists in at least four different areas of medicine.

Karam remembers being in the car with her mom when she received an email message, forwarded by one of her professors, with information about the program. It seemed like an interesting enough opportunity that she filled out the quick application without really investigating any further.

“Then I heard back from them, and I was like, ‘You know what, I kind of want to do more research on this,’” Karam said.

The more she watched and read about the program, the more intrigued she was.

“It was a unique opportunity because it’s really hard to get shadowing experience here in the States because of COVID,” Karam said. “I was like, ‘I kind of want to experience what a hospital is.’”

Karam interviewed and was accepted into the program, heading to Milan in the middle of July. She lived in a hotel for four weeks with a roommate and worked Monday through Thursday from 6 a.m. to 1 p.m., shadowing doctors in obstetrics and gynecology, neonatology and cardiology, among other disciplines.

She had her afternoons and evenings free to explore and have group dinners with other fellows or friends she knew in Milan. The fellowship program also organized group activities and excursions on Fridays.

“It was honestly amazing,” said Karam, who’s been asked to be an ambassador for the fellowship program. “I wasn’t held back by a lot of rules and restrictions. I was there as an observer, but I did feel like I could get more of a personal experience there, and the doctors really wanted you to. They wanted you in there. They wanted you in the rooms.”

Ready for the next step

Karam’s time in Italy only served to reinforce her desire to become a doctor.

She continued her strong academic performance last semester to complete her degree and plans to enroll in medical school after a gap year spent preparing for the Medical College Admission Test and filling out applications.

“I kind of want to stay in St. Louis just because my family is here, and I feel connected to St. Louis,” Karam said.

As for medical specialties, she’s had a long interest in dermatology, especially because of high instances of skin cancer in the Middle East. Her time in Italy has also made her consider Ob/Gyn and neonatology, so she’ll have some decisions to make.

But she’s pleased with where she’s at and thankful for the experiences she’s had the past two years.

“I wouldn’t be the person I am today if it weren’t for the welcoming environment at UMSL, where professors know me by name, want to build relationships with me, and encourage me to express my individuality in the classroom,” Karam wrote in the Center for Teaching and Learning newsletter. “It’s those little things that matter the most and can alter a student’s path in life.”