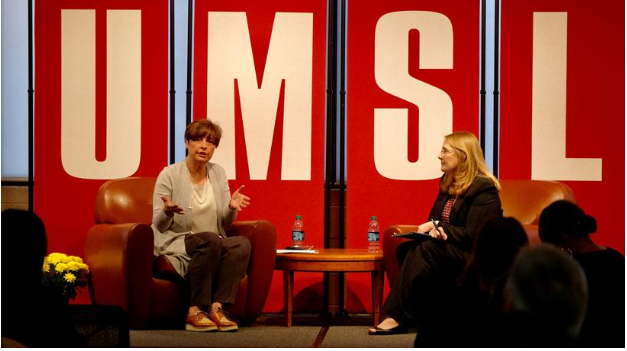 May 9, 2018 By Chase Kohler
DiversityFeaturedManagement

Create Your Own Opportunities The Executive Leadership Consortium (ELC) is a highly successful program that draws thought leaders to UMSL’s campus, which it hopes will acculturate students through exposure and interaction with said leaders. Since its founding in 2003, Managing Director Dr. Horne has produced six-speaker series to achieve the ELC’s mission. The Distinguished Speaker Series (DSS) is by far the largest and most successful production out of the six series, and it has continued to inspire students since its founding back in 2007.

Most recently, DSS introduced UMSL to Tessa Trelz, a highly recognized attorney at Armstrong Teasdale in Saint Louis. Tessa’s experience and successes were outlined during her speech, and her achievements seemed carefully formulated and planned as she was talking about them. However, Trelz made it clear that the contrary was the truth when she said: “I did not have a strategy, I simply capitalized on opportunities.”

Tessa made decisions based on guidance from valued friends and family members during developmental points in her life. She hammered her philosophy home when she said: “When door closes another will open.” Tessa provided a laundry list of specific instances throughout her life where this philosophy served her well. One of the examples describes her decision to attend Saint Louis University’s (SLU) Law School because she was wait-listed by her first choice. Although the door for an opportunity to attend Washington University (WashU) closed, she would have never met her husband had she chosen not to go to SLU. Prior to that, she would have never gone to law school unless her father had asked her at graduation: “Okay, now what’s next?” He didn’t push Tessa to attend a law school, but he “planted that seed” in her head.

Trelz seems to credit her achievements to a dynamic and tight-knit support group that she has been able to count on during difficult times. She continues to cultivate and grew this support group, especially through her work as a woman’s advocate at her own law firm and in the city of Saint Louis at large. In fact, Tessa sparked a trend by founding the “Armstrong Teasdale Program for the Professional Advancement of Women.” Her original idea was duplicated by several local and national law firms.

By inviting various speaker to campus, DSS fosters a sense of encouragement to its audience, and to the College of Business at large. Tessa Trelz’s story is especially inspirational to current students in the business school because it fosters optimism and vigor for the future. Trelz encourages students to apply her philosophy to their business ambitions, which she ultimately believes will lead to a brighter tomorrow.

The ELC and its initiatives through programs like DSS serves as a reminder of the importance of attitude and its impact on productivity or overall satisfaction. In Tessa’s experience, it is clear that she has benefited from a serendipitous approach to life. This philosophy is in line with ELC’s mission as her message is thought-provoking. UMSL Business and the ELC are proud of their affiliation with Trelz, and they have endorsed her further with an honorary degree for what she has generously given back to the community.