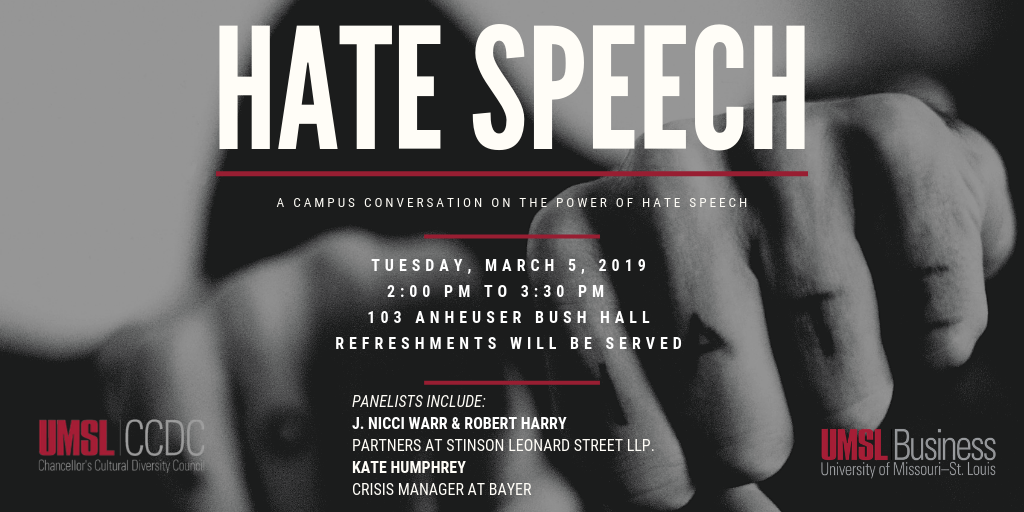 When Does Language Become Hate Speech?

Hate speech can be an awful way to express your opinions against other people. It can be used to discriminate other people no other what their races, sexual orientations, and religions are without knowing that it can hurt other people’s feelings. I went to the Hate Speech Panel in room 103 at Anheuser-Busch Hall this past Tuesday afternoon to learn about what the panelists have to say about hate speech in today society.

The panelists were J. Nicci Warr and Robert Harry, who works as partners at Stinson Leonard Street LLP., and Kate Humphrey, who works as a crisis manager at Bayer. They handed out a sheet of paper about campus conversation guidelines to creating a safe space, as well as showing it on the presentation screen. The paper mentioned that we should listen actively as a way to respect others when they are talking. We have learned that all responses will be accepted without criticism, but non-factual information will be addressed. We can be free to participate at your comfort level, but they encourage us to take risks and use the Campus Conversation as an opportunity to learn and practice new skills. The handout also said that we should speak from our own experiences instead of generalizations ( “I” instead of “they”, “We”, and “you”) and be conscious with body language and nonverbal responses as they can be as disrespectful as words.

The first discussion that Nicci and Robert talked about was RAV v. The City of St. Paul, Minnesota case in 1992 when a group of young teenage boys was allegedly burned in a crudely fashioned cross on a black family’s lawn. The police officer charged one of the young boys under a local bias-motivated criminal ordinance which prohibits the display of a symbol for hatred or discrimination in other people on the basis of race, color, creed, religion, or gender. They told us an unfortunate truth that we can’t punish someone from using hate speech against other people, but I personally believe that we should have the right to punish someone for being crude to other people in this society.

There is an Asian-American band called the Slants, who wanted to use a trademark for their name. They weren’t allowed to help change the trademark for Washington Redskins football team since the trademark can be defensive to people of Native American descent. They told us that we don’t have rules against people marching with “Black Lives Matter” signs in the street, as we learned that a lot of people should treat others with respect.

A guy named Anthony Elonis posted threatening Facebook posts on his estranged wife’s Facebook page. He posted a photo that has“I’m not going to rest until your body is a mess, soaked in blood and dying from all the little cuts” as a caption with this message, “If I only knew then what I know… I would have smothered your a-word with a pillow. Dumped your body in the back seat. Dropped you off in Toad Creek and made it look like a rape and murder.” He also posted another Facebook status that said: “Enough elementary schools in a ten-mile radius to initiate the most heinous school shooting ever imagined”. He got persecuted for posting these awful Facebook posts, which I’m glad the FBI persecuted him since you are not supposed to say terrifying posts as threats to other on someone’s social media page. J. Nicci Warr told us that you can’t say that you think someone is racist or a KKK member as a fact or opinion because it can be offensive to say false statements to someone without knowing the truth about the person. Nobody should violate the 1st Amendment with harming someone with hate speech and crime against them based on their racial and religious backgrounds. The Supreme Court said that schools can’t prohibit any student from wearing black peace sign armband as the decision from the Tinker v. Des Moines trial in 1969. It happened when three Des Moines public school pupils were suspended from school for wearing the armbands to protest the Government’s policy in Vietnam during its war.

In 1987, the court said that the First Amendment didn’t require schools to affirmatively promote particular types of student speech, during the court between Cathy Kuhlmeier & other two former students and Hazelwood East High School when they accused their old school of censoring the high school newspaper. In 2007, Bong Hits 4 Jesus trial had a high school student named Joseph Frederick at a school-supervised event for holding up a banner with the message “Bong Hits 4 Jesus”, a slang reference to marijuana smoking. His principal, Deborah Morse took away the banner and suspended him for ten days.

California Public High School students were told to not to wear a shirt with an American flag on Cinco De Mayo because they were afraid that it would create an outbreak of fighting between white and Mexican American students. You have full control of your own freedom of speech to wear whatever you want on campus once you’re a college student. We got to hear what Warr have to say about people holding up signs against feminism and liberalism. There was a picture that they showed us of a woman who held up signs. One of them said that “Feminism is cancer” and another one said that “Liberalism is a mental disorder. Our borders, language, culture make America great!” Those signs would cause a backlash for liberals who believe in feminism. In my opinion, I don’t think people should use signs to defend other people for their point of view on political interests.

It’s not a good idea to prohibit someone for their free speech. Ed Austin posted three photos on Facebook with the caption, “Scumbag cop saying he would have shot an innocent man 5 times instead of 4. Officer of the year too? Wow….”. One of the photos showed a picture of a post with the same police officer that he mentioned getting the officer of the year award. The first photo showed a screenshot of comments from a Facebook post from users, Rachel Bretz, Anthony Venable, and Alena Chandler. He also has a screenshot of Anthony Venable’s Facebook page.

Twitter user, live_republik tweeted a very threatening post that read “Hooray for Dallas and the real gangsters who took the shots! It’s time people! Let’s keep it going! No regard for those who have no regard for us! Die for freedom!” in reference to supporting the gunman in Dallas who killed five police officers. The user is actually a Mount Vernon firefighter named Omar Lanier. He was later suspended for the post without pay.

There is a Twitter platform called “Yes, You’re Racist” tweeted “If you recognize any of the Nazis marching in #Charlottesville, send me their names/profiles and I’ll make them famous #GoodNightAltRight”. As soon as the young men were identified, they got fired from their jobs for dressing as Nazis. This can upset many people of Jewish descent after what their ancestors been through during the Holocaust. Justine Sacco was also another Twitter user who posted a very offensive tweet before boarding a flight to South Africa. Her tweet said “Going to Africa. Hope I don’t get AIDS! Just kidding. I’m white!”, which caused her to lose her job as the communication executive for IAC. Her tweet can be very racist against Africans with stereotyping them as people to be more likely to get AIDS.

San Francisco 49ers quarterback, Colin Kaepernick sparked controversy for kneeling during the national anthem. He said that he does it to protest police shootings of African-American men and other social injustices faced by black people in America.

Kate Humphrey spoke out about what to say on social media without offending other people and getting caught from employers. Employers can search for your social media accounts online and see what you post. She said that she works for Bayer and always use #Bayer on her company, Twitter account. She said that you can’t track down anyone on social media, like your co-workers and anyone that you know, and having an offensive opinion against a person’s beliefs, like saying that you don’t like Republicans to someone who is a Republican, according to their social media pages. She also talked about people are using social networking as a norm and young people are more used to it online.

After learning more about hate speech and free speech, I think that a lot of people should be more aware of their actions before posting something online. If you’re not careful of what you post, you would risk losing your job or get suspended. To watch the panel discussion that I attended, visit this link for the full discussion.