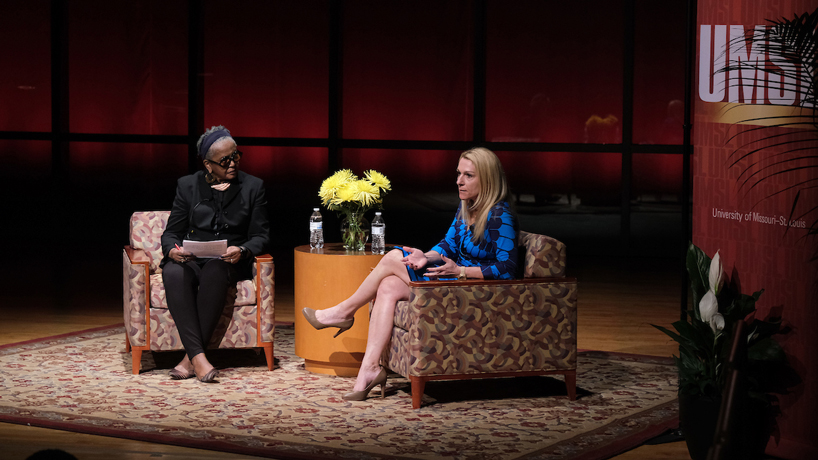 May 1, 2019 By Chase Kohler
AlumniDiversityFeaturedManagementMarketingStudent Life

On March 21st, UMSL students, myself included, had a chance to hear from one of the highest achievers to come out of our school. Rebecca Boyer, former CFO of Kelly Mitchell, spoke to students and community members alike in Lee Theater. Kelly Mitchell is a woman-owned technical staffing firm that works with Fortune 500 companies to find the best fit for their jobs. Rebecca was a huge part of Kelly Mitchell’s growth from a single office company into the powerhouse it is today. For that reason, myself and many other people who entered the theater that day were excited to hear what she had to say.

Rebecca’s presentation was called “Relationships, Risks, and Unknowns.” The presentation started off with Rebecca’s journey to reach the point she is at now. She started from humble beginnings, working at Kentucky Fried Chicken, and worked her way up until she reached where she is now, at SLR Executive Services. Along the way she went to school, got married, had kids, and traveled a lot. To say Rebecca led a tumultuous life would be an understatement, but she was able to make the most of it. Her most prolific job was as CFO of Kelly Mitchell, but Rebecca has had many different jobs, and it’s because of that experience that she is able to give great advice.

Rebecca stated that relationships were so important for her because it meant she didn’t need to have all the answers. If she had friends and partners to cover the things she didn’t know, then she could focus on the things she did know and could excel at them. Relationships were key to Rebecca coming so far in her journey as a businesswoman, with her connections to people being one of the main ways she was able to score new jobs. After all, it was her relationship with UMSL that allowed her to come back and give this presentation to us.

Rebecca also talked about how important it is to take risks. She said that being decisive is one of the most important things you can be for your company. Risks can lead to mistakes, but they can also lead to growth for your company, and growth for you. And what you can learn from those mistakes can oftentimes be more valuable than the consequences of that risk.

The unknown directly ties into risks. In order to face the unknown, you must take risks. The best way to face the unknown is to adapt to it, Rebecca said. Be sure to talk to the people you’ve formed relationships with in order to help yourself learn the unknown. But when those people also can’t help you, you have no choice but to take risks. Maybe from that experience, you will become the person other people look to for advice if they’re faced with the same unknown.

After her presentation, Rebecca answered questions from the audience. When asked what Rebecca is looking for with job seekers, she said she wanted someone who had done their research and could hit the ground running. If the person being interviewed didn’t know the first thing about the company their being interviewed for, they probably don’t care about being a proper fit for the company. When asked who her greatest role model was, she said her grandma, because she always made sure she didn’t mope over her failures and instead had her pick herself back up.