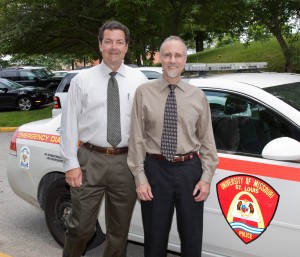 Forrest L. Van Ness, a former St. Louis County Police captain, was officially sworn in June 1 as chief of police and director of institutional safety at the University of Missouri–St. Louis. The brief ceremony took place in the offices of UMSL Provost Glen Cope. Van Ness will head a 25-member police force.

“We are thrilled with this appointment,” Cope said. “Chief Van Ness has an outstanding record of achievement not only in the very difficult job of law enforcement and administration, but he’s also distinguished himself in his work with elected officials, business and community leaders and the news media.”

Van Ness retired in 2009 from the St. Louis County Police Department after 28 years of service. He attained the rank of captain in 2001 and was named commander of the Fenton Precinct. In 2007, he was named to head up the Division of Criminal Investigation and the Bureau of Criminal Identification where he established a new laboratory system overseeing the work of the crime lab, crime scene, fingerprint, property control, fugitive affairs and prisoner conveyance units.

Van Ness started his career in 1980 as a police officer in the North County Precinct, where he moved up the ranks in a variety of positions. He also served in the U.S. Army Military Police from 1974-1977.

A UMSL alumnus, Van Ness earned a bachelor’s degree in general studies in 1991 and graduated from the FBI National Academy in 2003. He said he is amazed at the growth on campus since he was a student here and called himself “fortunate” to be taking over as chief at this time.

“The university police department has been run well,” he said, emphasizing the importance of an open dialogue between police and the many different groups on campus.

“The only way to keep a campus safe is by keeping the lines of communication open,” said Van Ness. “I want to meet with students, faculty, staff and listen to their concerns.”