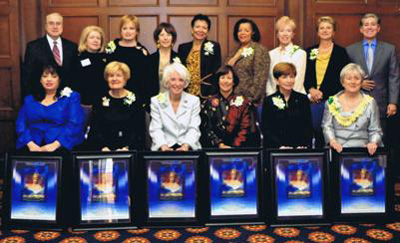 The Hellenic Spirit Foundation honored 12 women with Athena Awards for their impact on the St. Louis region. The awards were given Nov. 12 at the Missouri Athletic Club in downtown St. Louis.

Athena, guardian of the city of Athens and daughter of Zeus, was the patron of deity of kings. Representative of strategy, discipline, national defense, poetry and art, she was worshipped as a goddess, revered for her beauty and valued for her academic wisdom of philosophy and education.

“Honorees of the Athena Award are selected for recognition based on the radiance and passion of Hellenic beauty epitomized by the goddess Athena,” said Nick Karakas, chairman of the Karakas Family Foundation and the Greek Studies Advisory Council. “Their love for humanity — demonstrated through their extraordinary commitment to community service — exemplifies the ethos of the Hellenic Spirit.”

The Hellenic Spirit Foundation was created by a group of prominent Hellenic American professional and business leaders in the St. Louis metropolitan area. The foundation is supportive of educational pursuits and is dedicated to the preservation and enhancement of Hellenic language and culture.

The foundation is particularly proud of its active participation in the establishment of the chair of Greek studies at the University of Missouri–St. Louis. In addition, it is undertaking an active position of contributing to the formation of a chair of Byzantine history and orthodox Christian studies.

In the course of promoting and enhancing the Hellenic image in the St. Louis area the foundation has awarded numerous student college scholarships, distributed books and DVDs to high school libraries, and participated and supported various Greek events in the area.

Proceeds from fundraising events have enabled the Hellenic Spirit Foundation to contribute almost $1 million to further these ideals. Proceeds from the 2010 Athena Awards luncheon will benefit the scholarship program at the University of Missouri–St. Louis.