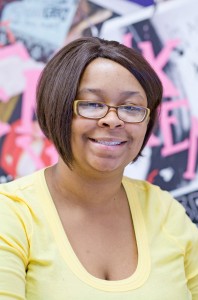 Antionette Dickens, who's pursuing a master's degree in communication from UMSL, is the inaugural recipient of the Katherine Dunham Internship at RAC.

Katherine Dunham (1909-2006) was a renowned dancer, choreographer, writer, anthropologist and social activist. The Regional Arts Commission has paid tribute to the dance pioneer with the establishment of the Katherine Dunham Internship. The first recipient is Antionette Dickens, who’s pursuing a master’s degree in communication from the University of Missouri–St. Louis.

Dickens, who earned a bachelor’s degree in media studies from UMSL, is also pursuing a graduate certificate of study in nonprofit leadership and management at UMSL.

“Antoinette is a capable student who expresses a great deal of enthusiasm for the work of nonprofits and the professionalization of the field,” said Nancy Kinney, director of the Nonprofit Management and Leadership program at UMSL. “An internship with an organization having such diverse and strong ties to arts groups across St. Louis will give her invaluable appreciation for the variety and complexity of this subsector of nonprofits.  Communication is a key interest for Antoinette, and so I expect she will rely heavily on the skills she has gained here at UMSL to carry out her RAC duties.”

As the first Katherine Dunham Intern, Dickens will work on the RAC grants process during which hundreds of applications are received and reviewed by the staff, citizen panels and the commissioners. Reading grants and attending grant applications reviews will help her gain working knowledge about how to approach grant applications, an important skill required for an arts administrator.

She also will develop a diversity project to identify minority students who are interested in the field of arts administration and create a way for them to network and communicate about their careers.

The Katherine Dunham Internship was created by Sara Burke, a RAC commissioner, and her husband, Jack, to assist African Americans who are interested in pursuing a career in arts management.  It was named as a tribute to Sara Burke’s mentor Katherine Dunham, with whom she studied dance in East St. Louis, Ill. Over her long career, Dunham received the Kennedy Center Medal of Honor and numerous other awards for her contributions to the arts and social justice.

Founded in 1985, the Regional Arts Commission has served as a cultural catalyst in the St. Louis area by providing financial, technical, promotional and other support for arts organizations. It has awarded more than 5,000 grants totaling nearly $70 million since its inception.